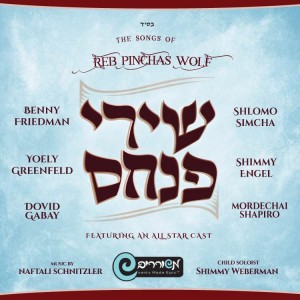 Shirei Pinchas features eleven original compositions by Pinchas Wolf of Detroit. While his songs have been featured both by Yehuda Green and Yonasan Schwartz on their most recent albums, Shirei Pinchas is the first time that Wolf, who is turning 70 this fall, has made his music available to the public.

Wolf, who was born in a DP camp, spent most of his formative years in Montreal. A student first at the Klausenberger cheder and then at the Lubavitch cheder, Wolf began composing music at just ten years old. He credits that lifelong passion for Chasidishe niggunim with his return to religious observance after a brief crisis that left him struggling on a personal level. In more recent years, having been told by a surgeon that he was humming a tune while undergoing surgery and sedated with general anesthesia, Wolf decided it was time to share his music with the public.

“It was a turning point for me,” said Wolf. “It made me realize that Hashem wanted me back and he wanted my nigunim to get out there.”

The Detroit Chazan said that he continues the practice he began as a Bochur of composing a new Nigun each week in honor of Shabbos. 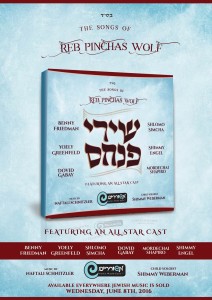