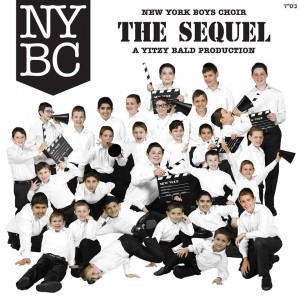 Very few people have had as much influence on the current state of Jewish Music as Yitzy Bald.  When I was in high school, Mendy Wald’s Sameach was lighting the world on fire, and ten years later he introduced bagpipes into the genre on Dovid Gabay’s Legabay, with many other hits in between.  In 2011, he unveiled a project which had been years in the making: the debut album of the New York Boys Choir, which was composed, arranged, recorded, and produced completely by Yitzy Bald himself, under his exclusive artistic direction.

In the off chance you never heard the first NYBC album (what are you waiting for?), NYBC has a very unique sound.  More upbeat than Miami, not as yeshivish as Shira Chadasha, but less poppy than YBC, Yitzy managed to find an individual flavor for his group.  For example, regarding the amount of computerized effects on the album (on a scale of Tzlil V’zemer to Kinderlach) NYBC ranks above Shira Chadasha, but still a step or three below Yeshiva Boys Choir.  In addition, a great group of talented soloists (including Jewish Star winner Dovid Moskovits, whose own solo album, Shalom, came out last fall and featured a cover of “Al Hasulam” from the first NYBC album) made the album a great listening experience.

New York Boys Choir: The Sequel comes to us after what has apparently been a very busy three years for Yitzy and his young charges.  Concerts, videos, and even an invitation from America’s Got Talent(which, unfortunately, was declined), didn’t get in the way of another well-done album.  The Sequel takes the same ingredients which made the first album special and remixes them into something completely new.  Most of the songs on this album are in English, and following the approach from the first album, most of those have only one verse and the chorus—easier for the kids to remember when performing, I suppose.  A great assortment of musicians (including, among many others, Shai Barak, Nochi Krohn, Gal Gershovsky, Aryeh Kunstler, and Dani Flam), adult backup vocals (mainly Yitzy Spinner, who knows a thing or two about kids’ choirs), and absolutely superb mixing and mastering (you can hear every note of every instrument—not to be taken for granted in this industry) bring the package all together.

All compositions and lyrics by Yitzy Bald.  Any links point to authorized music videos.

Track 1, “Gan Eden”:If choir songs were ever sung at chasunas (for some reason they never are), this song could be added to the second dance playlist.  “Gan Eden” starts the album off with a wedding-themed bang, a rocked up disco with a lively beat and plenty of synthy effects to get you in the mood for the rest of the album.

Track 2, “Shananana” (feat. Michoel Pruzansky):The lyrics for this rock song are loosely based on Hoshanos and Shabbos Mincha, mixed with a verse in English by Yitzy Bald, which describes the love and devotion people have for their fellow Jews.  Michoel Pruzansky provides extra flavor here, and the engineering department cooks up a nice key change enhanced by some DJ effects.

Track 3, “Neshoma”: If you liked “Chesed” from NYBC’s first album, you will like “Neshoma”.  Bonus points go to the intro, performed on the alto sax by Itai Weissman.

Track 4, “Jew Joy”:Yes, you read that song title correctly.  “Jew Joy” is another guitar-heavy rock song which beseeches Hashem to see the joy we have when doing mitzvos, despite all that we’ve been through throughout the years.  (Also, bonus points to any ‘90s-vintage Mendy Wald fans who can find the song which shares an intro with this track).

Track 5, “Show Your Face”:Yitzy wrote this song in memory of the eight bachurim who were murdered by a terrorist at Yeshivat Mercaz Harav on March 6, 2008.  The chorus of this song is probably one of the best combinations of music (a Bon Jovi-esque power-chord-filled rock anthem) and lyrics (“O G-d in Heaven won’t you end this story/Feel the pain when I call out to thee…”) I’ve heard all year.  Two comments on those lines: 1) “End this story” is probably the most interesting possible way to poetically say “bring the geulah”; and 2) For crying out loud, HE USED THE WORD “THEE” IN A JEWISH SONG!  Is the world coming to an end?

Track 6, “Tov Lehodos”: Slide this one into the slow set right next to “Chesed” and “Neshoma”.  It will fit perfectly.  More sax from Itai Weissman is just a bonus.

Track 7, “Boruch Hashem”:Another rock song which works perfectly with the rest of the NYBC repertoire.  Power chords, just enough Autotune to keep everyone honest, a tight arrangement, and a great key change just under 3 minutes in.

Track 8, “Just Dream On”: How can we change things in this world for the better?  Well, Yitzy tells us, it never hurts to dream, to aim high, because “dreamin’ always pays”.  That is the theme of this techno-pop ballad which exhorts us to never give up on our dreams, no matter how bleak the situation looks.

Track 9, “Salaam”:Not since MBD in the early 1990s has a frum artist gotten so overtly political in his songwriting.  The first NYBC album featured the rock anthem “Yehudi Lo Megaresh Yehudi”, Yitzy Bald’s musical protest to the Gaza disengagement, and The Sequel features this track, which is an explicit message to the Arab world to put down their weapons and attempt to “live side by side” with their brothers in Israel.

Track 10, “M-I-R-A-C-L-E”:Breaking News: Not just the Maccabeats can do Chanukah songs!  This rock song was released as a single and a music video last year, and it recounts the story of the Chanukah miracle with an emphasis on the Jewish people fighting for its eternal survival by standing up for the Torah way of life in every generation.

Track 12, “Kids of Courage”: This track, originally released in 2012, was the culmination of a year-long partnership between the NYBC and Kids of Courage, the non-profit which helps provide fun experiences for critically ill children and their families.  The video (follow the above link) features the members of the choir having fun with the kids while performing this track.  Star soloist Dovid Moskovits does his thing in the lead role, and it’s obvious that he won the Jewish Star competition for a reason.

Purchase the CD at MostlyMusic.com