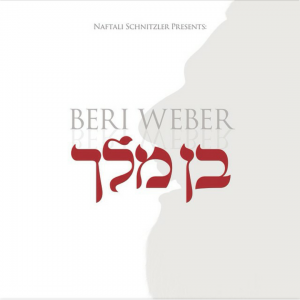 I started listening to Beri Weber with the release of “Thank You Hashem”, which I reviewed. I was initially skeptical because I had never been big on Hassidish singers, partially because I don’t speak Yiddish. Beri Weber has changed all that! He’s got incredible talent, a sweet yet powerful voice, and a unique style that combines the old with the new. I quickly bought Fabreng and later Fabreng Vol 2, Beri Weber’s two acapella kumzitz style CDs. They are excellent sefira music… all the music is pure harmonizing. Not to mention they both have around 50 tracks, half of which are instrumental. So needless to say, I enjoyed “Thank You Hashem” and am excited about the recent release of Ben Melech.

Ben Melech has definitely lived up to my expectations. Each song has a unique flavor and the album is done very intelligently. I cannot say enough, also, how beautiful Beri Weber’s voice is. And he sings with A LOT of emotion.He was singing at a wedding I was at a few weeks ago and sounded just as good in person. I really respect how Beri Weber puts his personality onto the album. Some of the songs sound almost theatrical and he occasionally speaks in Yiddish in the middle of the songs. Unfortunately I generally have no idea what he is saying so part of that is lost on me. He goes against convention in subtle ways aside from the songs being different. For example, most CDs these days seem to alternate between slow and fast songs and have the album be half of each. This album starts out with fast songs and the end is mostly slow songs. Overall it is definitely a quality album, though some songs sound out amongst the crowd.

Yachad (Composed by Eli Schwab)
-Another Hebrew song about achdus! Good thing I like this style because they are everywhere !
-Somewhere between Yesh Tikvah and a “regular song”– it’s got more lyrics than most songs, but nowhere near Yesh Tikvah, Am Echad, etc., and is not as “rocky”
Techno fun feel good song, great start to the album

Vshomri (Composed by Pinky Weber)
-Reminds me of Sheyibone , but I’m not sure why (it was my favorite on Thank you Hashem)
-Tempo is mixed up in a really fun and unexpected way
-Choirs, adults and kids, used perfectly. Not just as backup yet they don’t take over
-Very fun but not intense
-Exemplifies the album for me with the mix of traditional and modern together.
Definitely my favorite fast song on the album!!! Love the chorus….

Lmikdusheich (Composed by Chaim Blumenfeld)
-The first slow song on the album!
-Right away you hear Beri Weber’s incredibly beautiful voice
-Sounds like it could be on one of the Fabreng CDs…a lot of choir and very little music
-The music is traditional and simple and doesn’t get in the way of the rest of the song
Absolutely gorgeous, heartfelt song. The whole song feels very well thought-out , with choirs coming in at the right times, the music going quiet at the right times…perfect. Very moving. Can’t say enough.

Shehakol (Composed by Beri Weber)
-Interesting! I don’t think I have ever heard Shehakol as a song!
-Has a similar feel as Vashen– swing music! So much fun. This one also brings in the guitars a lot, though.
Fun dance song… sounds like a wedding song if not for the lyrics but hey you never know.

Nigun Lev
-I’m not usually one for nigunim.. I’m a lyrics person. But I appreciate their beauty!
-This is a traditional nigun with simple traditional music and a choir throughout harmonizing.
-Beri Weber hits a lot of great notes here and it will remind you of Fabreng as well!
Simple but pretty and very enjoyable nigun

Tuisee (Composed by Beri Weber and Naftali Schnitzler)
-Starts off very classical…pianos, acoustic guitars, etc.-Sort of a dark feel to it
-We get some Yiddish speaking in the middle… close to a minute and a half. I have no idea what he is saying. I think I heard sheifeleh a few times? Probably not.The Tatte! after the speech is worth listening to the speechfor, even if you don’t understand it !
Beautiful song, sounds like he is really pleading with Hashem.

V’atu (Composed by Dovid Kaufman)
-Very fresh feel to it, at times almost theatrical sounding
-The high part is uplifting , and the low part is a little dark. Even though I don’t get the Yiddish, I can understand the gist of the song
-The high part and low part are so different yet they go well together
-We get a little English lyrics, reminiscent of Haneshama . “Even in the darkest of times, just hold tight…”
-Love the soft ending– music softens and Beri Weber almost whispers. Perfect ending.
Uplifting and unique rock ballad with a great message

Heiliger Bashefer (Composed by Chaim Blumenfeld and Beri Weber)
-Relaxed verses and a sweeping, jump up and down chorus
-Reminds me of Vshomri in the mixes of tempo
-Thank you Beri Weber for using Yiddish that most of us can understand ! Mixed with Hebrew in this case
-Traditional music mixed with techno and rock
-How in the world does he make techno sound beautiful?
Catchy and fun song , one of my favorites

Ben Melech (Composed by Beri Weber– lyrics also by Beri Weber)
-The title track is #10 on the album!
-Sadly I cannot understand most of this song, but I can understand his point solely from the niggun he starts with! (The actual words don’t come until 1:38). Ends with “Ani ldodi vdodi li”..interesting
-One of the few times I really appreciate the niggunim throughout
-It sounds so real- I almost feel like I am spying on his davening!
Pure and soul-stirring mostly niggun/Yiddish teffila

V’afili B’Hastara ft. Yoelish Klein (Composed by Shaya Gross)
-Cool intro! Right into the singing
-Beri Weber and Yoelish Klein sound amazing together. I don’t know who Yoelish Klein is, but he was a really neat voice , and I love their harmonizing! Sounds like friends singing together.
-Fast but laid back song
-Its 6:19, but I can’t get enough of it. Repeat.
Another unique song that is essentially a duet between two beautiful but contrasting voices. Another favorite of mine. I find myself listening to this one over and over!