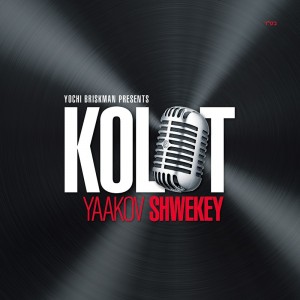 A note to my adoring fans: I apologize for not being able to write any reviews of many of the recent amazing releases in Jewish Music. I am hoping to be able to “catch up” and write about all of my favorites in the next month or so. The review below I began pretty soon after it was released and now that it’s been about 6 months or so…I love it even more!

Yaakov Shwekey is one of the most versatile and talented performers today in Jewish Music. Every time that it seems that his popularity might be slipping or that his style might be getting stagnant, he manages to come out with an album that blows everyone away. With his recently released album Kolot, it is now 3 straight albums that Yaakov has really opened eyes with how versatile and innovative he and his producer Yochi Briskman are. This album is mostly Israeli style with some of his signature Yeshivish and Sephardi styles mixed in.

Without any further ado here is my song by song assessment:

Am Yisrael- The album starts off with a bang and this song gets my feet tapping along and ready to dance along. This Yishai Lapidot hit really speaks to us in these times we are living through. Yishai’s lyrics, while always applicable, have a new meaning after what we have gone through in Eretz Yisroel. The song is arranged by Udi Damari, who has arranged songs on other recent Yochi Briskman productions and adds a nice dimension to the song with the synth sounds and distinct style.

Kolot – One thing I have to mention before talking about the song itself is how I have made it pretty clear before that I don’t understand Ivrit that well and it’s hard for me to comment on the meaning of songs when I don’t understand them. I love that the cover of the album has a translation of the words so that I can understand it! This song, Kolot, is the title track of the album and is a haunting melody, composed by Tomer Adaddi and features guest vocals of Israeli star Shlomi Shabat. This is a beautiful song.

Smeichim – One of the people who I neglected to mention above when mentioning the versatility of Yaakov was his favorite composer, Yitzy Waldner. Yitzy and Yaakov composed this rock ballad together and along with Yanky Briskman’s arrangements have created a really catchy and popular song. The background vocals on this song feature The Zemiros Choir.

Tefilat Kallah – This Elie Schwab masterpiece is already a huge hit and often requested song by chupas. It is a beautiful song that builds up as the song progresses. I really love how Udi Damari’s arrangements on this song make Yaakov’s sweet voice and amazing range stand out.

Ach Sameach – This Mediterranean style Horah is another masterpiece of composer and arranger Udi Damari. I have not heard it played at any weddings or simchas but it’s a real enjoyable song.

Zeh Hakatan – Ok so I’ll admit it, I have a brief moment of panic any time this song starts and I hear a baby crying…yes I do still get woken up by my knayna hara baby twins, but their cry is way cuter! In all seriousness, this is a very moving song and no wonder; it’s composed by Yitzy Waldner. Yitzy joins in with background vocals on this song as well. The Ivrit lyrics by famous lyricist Miriam Israeli take a quick spin through the various milestones of parenthood. The song starts so soft and the emotion builds as the expert arrangements of Amit Harel build up as well. I really like how the song builds up after Noam “Hargol” Burg’s guitar solo. Oh, and the cry at the end doesn’t scare me as much because I’m ready for it.

Osim Tshuvah – Yaakov has brought back his Metalish friends on this album singing their hit from their 2nd album. With all due respect, I love their musicianship but I much prefer this version with them playing and Yaakov singing. It’s a real solid rock song composed by Dani Maman (and if you Google his name you will find some real wicked guitar solos on YouTube) and arranged by Jeff Horvich.

Kamu Baneha – This is another Yitzy Waldner/Yaakov Shwekey collaboration and just as nice and beautiful as the last one. Yitzy sings the background vocals and Yanky Briskman’s arrangements are solid. This is one song I could listen to over and over again.

Et Rikod – Usually when I review an album it is too soon to know which songs will be the big hits. Since it took me so long…I can say that this without a doubt is the HIT of the album. Yaakov co-composes this song with Yitzy Waldner, and the techno arrangements by Amit Harel make this a real catchy song. The Zemiros Choir once again does a real formidable job with the background vocals. The lyrics are a little tongue twisting but sing it a few times and you’ll get it down pat…talking from experience of course!

Assara Bnei Adam – This ballad/rock song is one of my favorites on this amazing album. Composed and arranged by the talented Aaron Razel this song carries a strong message for us to strengthen our learning to help bring Moshiach. Aaron guest sings on this song as well and I really like how Yaakov’s voice blends with Aaron’s voice. This song is a perfect ending to an amazing album.

In conclusion, if you missed the boat and never bought this album…what are you waiting for! You can buy it at http://www.mostlymusic.com/kolot.html or anywhere quality Jewish Music is sold!