Review – When Zaidy Was Young 3 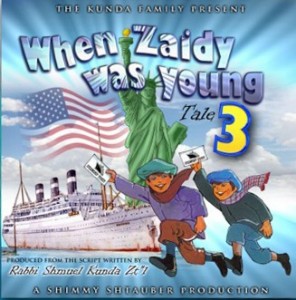 The Jewish children’s entertainment industry suffered a massive loss 2 years ago. We all lost a man who single-handedly produced some of the greatest children’s story tapes and books ever. Reb Shmuel Kunda was a unique man in so many ways. He was a man whose warmth and joyous spirit was felt by all, who could make you laugh on the spot, and then have you walking away feeling happy as ever about life. But most of all, he was a man of deep caring. Yes, Reb Shmuel Kunda was a rare human being.

And then it happened. Illness set in. Slowly, like a dreadful nightmare, the great mind and personality that was Reb Shmuel sadly deteriorated, until one day, the devastating news arrived. Reb Shmuel was no longer among us. At times like this, we often wonder what can be done to carry on a legacy of such a great man. We speak of his deeds. We try to learn from his ways. We learn in his memory. But, still the void is felt and we wish we could do more to carry on his legacy. The question still remains, what can be be done?

To Reb Shmuels son, the answer to this question was clear. Ahron Kunda took the original script that his father had completed before the illness and got to work. In this new adventure tale, Ahron joins up forces with the renowned vocal talent from Israel, (famously known as the man of many voices) Shimmy Shtauber. Using the original script as a blueprint, the two set out to build a dynamic and fast paced tale of adventure and intrigue.
Our story starts off where many of our previous stories have begun, in our beloved zaidy’s house. After receiving a visit from his grandson Eli, Zaidy introduces us all to cousin Zundel, who proceeds to share with us the story of how he and his family struggled in Russia. The tale continues on throughout the album, delivering sequence after sequence of non-stop, action packed, spellbinding suspense. We find out about a diabolical plot to cause destruction and mayhem throughout the Jewish quarters. Next up we meet a smart but cunning boss and a band of murderous thugs. Things start to heat up quickly as the Himmelsteins realize the danger to their family is imminent. As they plan their escape, the plot line once again thickens, and quickly complicates but the Himmelsteins persevere with their faith unshaken, as they run for their very lives. The story leads us all on a daring late night escape including a very close encounter with some crooked Russian authorities.
At this point, I would like to take a moment to point out one thing I really found myself enjoying immensely on this album, which is the humor. In between all these fast and furious action takes, we are generously treated to a non-stop smorgasbord of clever puns and side splitting comedy, all delivered in Kunda’s trademark style. The delivery is so authentic, and they stay so true throughout to the classic style of Kunda humor and wise cracks that we almost feel like Reb Shmuel himself is delivering it to us.
Finally, as the album concludes, we sigh with relief as the Himmelstein’s make it safely ashore to Eli’s Island. I mean Ellis Island. Actually, they hardly make it. You see, as would be expected, our beloved Himmelstein family hardly even steps foot in the building, before new troubles begin to surface as they soon find out that their papers which were needed to enter America have been thrown overboard. ( I’m not sure why, but I had a bad feeling about those papers from the beginning) Then, in the final scene, our beloved Mayor Figaleli La Garden Hose (remember him?) himself shows up, just in time to save the day.
I think you will really find this album to be great for traveling long distances with the kids, or even just on a regular afternoon when the kids are home from school. It will entertain, as well as inspire, and leave the kids wanting more. All in all, I think it’s fair to say, this ambitious undertaking has succeeded far beyond any one’s expectations. The action, the dialogues, the lessons, the humor, and most importantly, that trademark Kunda style, is all there. I have no doubt that Reb Shmuel is looking down with pride, and dare I say enjoyment, upon seeing the fruits of his creative efforts being borne out. Yes, this is one album you will undoubtedly be listening to over and over again for many good years to come.