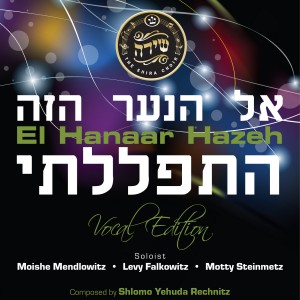 This past winter the world was introduced to a stunning song entitled “El Hanaar Hazeh.” The song was composed by renowned philanthropist and baal tzedaka/chessed Shlomo Yehuda Rechnitz in honor of the Bar Mitzvah of his nephew. El Hanaar was performed by the mega talented Shira Choir led by Shraga Gold and featured star soloists Moishe Mendelowitz, Levy Falkowitz and Motty Steinmetz. The song was released via music video, racked up over 100,000 hits, a staggering number for a chassidic song.

Now in honor of Sefira the Shira choir is proud to present the vocal edition of “El Hanaar Hazeh.” This way music fans who are missing this touching song will now be able to enjoy it in a whole new way. The song will be available as a FREE download on MostlyMusic.com.