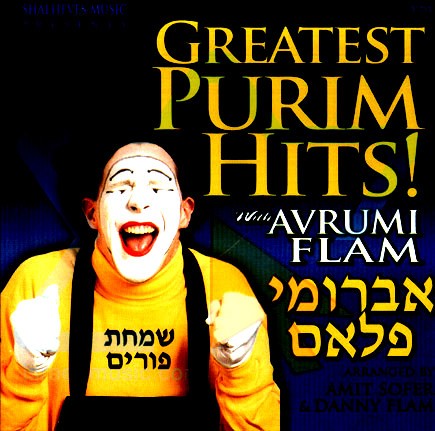 Purim albums tend to follow a general template.  Make sure to include the old standbys (“Layehudim”, “Venahaphoch Hu”), throw in a couple of horas or discos (which may or may not be Purim themed), ignore the slow songs, add one original song (optional), and voila!  A Purim album.  What separates the good albums from the OK albums is the quality of the arrangements, the skill of the instrumentalists, and vocal ability of the lead singer (if applicable).

Enter Greatest Purim Hits! with Avrumi Flam.  Originally released in 2005, Greatest Purim Hits is all of the above and more.  The album is expertly arranged by Amit Sofer and Danny Flam (who are also both responsible for most of the brass section) and features an original song composed by Avrumi himself.  Avrumi has a great, very versatile voice, and the song selection on the album is spot on.  Starting with…

Track 1, “Venahaphoch Hu” (composed by Avrumi Flam):Boom, boom, CLAP! Boom, boom, CLAP!  No, that’s not the iconic intro to “We Will Rock You”.  It’s the almost-as-iconic intro to Avrumi’s original hit Purim anthem.  This version of “Venahaphoch” is probably the best original Purim song between MBD’s “Timche” (which we’ll get to later) and Yossi Green’s “Layehudim” from The 8th Note.

Tracks 2-10, “Mishenichnas Medley”:This medley is your “Purim mainstays” set.  The first two tracks are really the same song (there’s no real difference between “Mishenichnas” and “Venahaphoch”) and Avrumi moves on to “Chayav Inish” (twice), a classic “Layehudim”, “Revach”, “V’gam Charvona”, “Shoshanas Yaakov”, and “Oy oy oy” (a niggun featured prominently on other Purim albums).  While the brass section is what anchors this album, the woodwind players on this medley absolutely steal the show.  Mark Rozen (tenor sax), Ron Bertolet (alto sax), and Guri Agmon (alto and baritone sax, flute, and clarinet) are all incredible, and the album is much better for their presence.

Tracks 11-17, “Layehudim Medley”: This set is the more modern of the two freilach medleys on the album—“modern” in the sense that I have heard original recordings of most of these songs (while no one knows the original composer of “Venahaphoch Hu”) and several of them are rocked up.  After the classic “Layehudim”, we are treated to MBD’s “Layehudim” (from Hold On), Amudei Sheish’s “Al Hanisim”, MBD’s “Timche” (from Tomid B’simcha), “Teshiusum” (a chassidishe classic), Ben-Tzion Schenker’s “Layehudim”, and “Mishenichnas” (this one).  Again, arrangements are extremely well done, to the point where even though we’ve heard all of these songs before, it doesn’t sound repetitive or boring.

Tracks 18-20, “Purim Hora Medley”: For when the dancing at your Purim Seudah slows to 120 beats per minute (alcohol will have that effect, you know), it’s time to break out the hora medley.  In this set, Avrumi has accomplished something I didn’t know was possible: he found three (count ‘em: THREE) Purim-themed horas!  Although he does get an asterisk for repeating a song we already heard (Ben-Tzion Schenker’s “Layehudim”, just slowed down to a disco/salsa/hora) it’s still an accomplishment to put together a nearly-seven-minute medley without playing a single Shwekey song.

In conclusion, Greatest Purim Hits! with Avrumi Flam is in the pantheon of great Purim compilations.  It may be missing the shtick of Purim MiX, but that just means you don’t have to fast-forward through the comedy routines while listening at your Purim Seudah.  Highly recommended—even if that clown on the front cover is kind of creepy.  Happy Purim everyone!