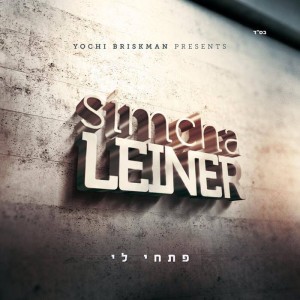 Jewish singers enter the industry in various ways.  In no particular order, we have: the Grown Up Child Soloists (Ari Goldwag, Shloime Dachs), the Dynastic Successors Who May Have Been Born In The Studio (MBD, Yeedle, Benny Friedman, 8th Day), the Chazzanim (Shlomo Simcha, YM Helfgot, Tzudik), the Instant Sensations (Baruch Levine), the Composers (Baruch Levine again, Abie Rotenberg, Shlomo Carlebach), and the Guys Who Broke Off From A Group (Dov Levine, Gershon Veroba, anyone with the last name Schwebel).  Finally, we have the Wedding Singers Who Have Seemingly Been Working On An Album Forever.  Lipa, Dovid Gabay, and Benny Friedman were all members of this group, and now they are finally joined by Simcha Leiner, with his long-awaited debut album.  Pischi Li was produced by Yochi Briskman, and features arrangements by Yanky Briskman and Udi Damari.  Songs were mainly composed by Yitzy Waldner, as well as by Simcha himself and others.

If you haven’t heard Simcha Leiner yet, do yourself a favor and listen to “Meheira”, “Kol Berama”, and “Mimamakim”, Simcha’s previously released singles, which are all available for free at MostlyMusic.com.  Simcha has a truly special voice—as sweet and as expressive as a violin or a cello.  Pischi Liis the next logical step in Simcha’s career—a full album which showcases his amazing voice, with tracks in all of the essential genres of Jewish music.

Track 1, “Mi Mi Mi” (Composed by Yoeli Dickman):The opening track of an album is selected to make a statement—to set the theme for the rest of the album by telling the listener what to expect.  The opening track of a debut album has an even weightier responsibility: to possibly set the theme for an artist’s entire career.  Think “Shomati” by Yaakov Shwekey, “V’eirastich” by Ohad, “Sois Asis” by Dovid Gabay, or even “Ki Lo Yitosh” by MBD.  “Mi Mi Mi” is an exciting disco which I can see being used as the opening song at a concert or at the second dance at a chasunah.  Jim Hynes’ brass section is featured prominently, and Yanky Briskman’s arrangements are spot-on.

Track 2, “Keracheim” (Composed by Yochanan Shapiro): Sometimes, it seems that the modus operandi of certain Jewish singers (cough, Shwekey, Ohad, cough) is to make sure that you know that they can sing higher than you can, and there’s nothing you can do about it.  While it is true that Simcha Leiner can probably sing higher than you can, he doesn’t go out of his way to rub it in—in fact, on this beautiful slow song he reaches down into baritone territory.  “Keracheim” features the Misha Guttenberg string ensemble, Yoel Polatcek’s Zemiros Choir, and the Shir V’Shevach Boys Choir, conducted by Chaim Meir Fligman.

Track 3, “Shebechol” (Composed by Yitzy Waldner):Another disco, with extra musical emphasis on synthesizers, courtesy of Ron Vered, and saxophone, played by Cliff Lyons.  Look for this track to compete with “Mi Mi Mi” for space on the band leader’s playlist.

Track 4, “Pischi Li” (Composed by Yochanan Gordon): The title track of this album, “Pischi Li” is an absolute winner.  The lyrics are from Shir Hashirim (5:2), which talks (metaphorically) about the Jewish people reminiscing regretfully about lost opportunities to do teshuva during the time of the first Beis Hamikdash.  Once again, the piano playing and arrangements were done by Yanky Briskman and strings come courtesy of Misha Guttenberg.

Track 6, “Shomer” (Composed by Yitzy Waldner):A slow ballad, “Shomer” is another nice song which helps to showcase the range and capabilities of Simcha’s voice.  Udi Damari arranges, and Nitzan Kanati handles the string section in this song, which also features a soprano sax solo by Gilad Ronen.

Track 7, “Eliyahu” (Composed by Yitzy Waldner):A Motzaei Shabbos disco!  With an intro that could be from an ABBA song!  Seriously, though, this song is a hopping, driving dance number which changes style from Broadway, to salsa, to funk, and back to disco.  Well done job by Yanky Briskman and the Zemiros Choir.

Track 8, “Ono Hashem” (Composed by Simcha Leiner):This track, composed by Simcha himself, is another tefilah-based song, a versatile ballad which could be sung by any number of singers from the current generation—I could hear anyone from Dovid Gabay and Yaakov Shwekey to Shloime Daskal and Shragee Gestetner performing this song.  The fact that Simcha Leiner kept the song for himself shows his confidence in being able to pull off convincing performances of what could be considered stereotypical Jewish tunes.

Track 9, “Simcha” (Composed by Yitzy Waldner):Of course there would be a song entitled “Simcha” on this album, right?  “Simcha” is my favorite song on the album; it kind of reminds me of Dovid Gabay’s “Mi Shebeirach”—a driving disco-rock with great range.  The arrangements by Udi Damari will get you jumping, and the high part is guaranteed to get stuck in your head for days.

Track 10, “V’Atoh” (Composed by Elimelech Blumstein): This song is probably the most similar to Simcha’s previously released singles: long, high notes; sweeping, majestic arrangements (Yanky Briskman again); and that high D at the end!  Maybe he is trying to rub it in…

Overall, Pischi Li is a great debut effort.  It’s relatively short—only 47 minutes—but that may be indicative of a larger trend (Shwekey’s Kolot is only 46 minutes long).  Simcha Leiner has announced his arrival to the world—it’s time for us to listen.