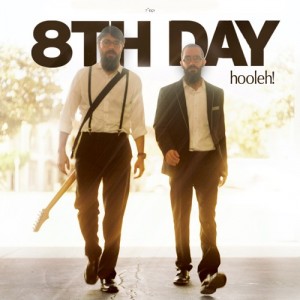 The ever-popular 8th Day’s new album is out, and unless you’ve been hiding under a rock, you’ve probably heard opinions on it hither and thither. Personally, I follow Andy Statman’s sage advice not to cast aspersions on a disc until it’s been given a few spins. As usual, let’s also reflect on their lyrics and see what we come up with. I don’t know the Marcus Bros. well enough to completely follow their lyrical logic, but I can tell you what messages they cause to resonate within me, as a fellow Chabadnik. Our cultural similarities should allow my guesses to land within the approximate galaxy of their intended idea.

Hooleh: (*****) Kicking it off with this snappy piece, 8th Day returns to a hip song with slight reflections on Yalili. For one, the names themselves – pseudo-words, slang-ish; the lyrics slightly inane, but lots of fun. The hora beat that features prominently in Yalili. Here, however, the hora only slips in at the chorus. But let that not make you think that this is simply a cut off that hit; Hooleh’s got its own thing going. The excellent production shows on the growth of the Marcus’ studio talent, and in fact, they run the vocals impeccably over the power drums and keys that give the song a distinctive song. Stellar harmonics in the bridgework rip the lyrics from the original playful Chabad nigun that gave birth to this song – [Fried’s] Karahod; the percussive vocals on the word “Hooleh” in the hook, all give it flavor and coolness at the same time. Great job pulling it all together.

“This whole world spins on divine” – truly great lyrics (though a bit too similar – but better – than Didan’s “the whole world got spinnin’”), and undoubtedly a reason, as the song exhorts you, to “dance the heavens open”, especially when it “slips some hope in”. Recognizing G-d’s omniscience will do that to ya. Especially to this tune.

Wait For You: (***1/2) A light and airy beginning to this golus/Moshiach anthem, rhythm guitar keeping pace while the leads waft in and out. A unique sound in Jewish music. Hammond organs is well placed throughout, too. Ends a bit on the sudden side.

Sing-Along Song: (**) I have no idea why this acoustic islander/reggae song was included – catchy though it may be, it’s got no depth, never builds up. While most of the lyrics are jigsaw-fitted poetry (though I haven’t the slightest clue what they’re on about), the chorus is not, and it’s repeated just too many times. My guess? They were trying to recall some of the simplicity of their first album. That, and a chance to get some ukulele into Jewish music.

Thank You (Blessings on Yo Head): (****) Why the double title here? Actually, it’s my shtick – I think the latter would have fit better than the pretty bland former. Electro-pop kicks in with a snazzy groove and bassline out of the 80’s. But the chorus is where things are at, both musically and lyrically – even if it has slight ghetto vibes with the pronunciation, yo. Shmuel reaches for chazzonus in the bridge; I like the idea, but the execution needed work. Overall, it’s the overdubs and that spectacular guitar solo (and have I mentioned the chorus?) that really give it its full-bodied flavor.

Ker a Velt: (***1/2) Here’s a song that’ll perplex some people, so let’s start with the words.
Firstly, some sources. The term for the title of this song (Yiddish for “Turn the world over”) is taken from one of the rawest moments in Lubavitch history. On the 12 of Tamuz, 1984, the Rebbe tore into his Chassidim for not doing enough to bring Moshiach, ending with this emotional crescendo: https://www.youtube.com/watch?v=qrQ3_YGmttU. Given that powerful source to the term, I don’t identify with the laissez faire tune used with these lyrics, but we’ll talk about that later.

The term “Meshugga” (“The crazy people think they can change the world/to bring Moshiach”) has a few different meanings we can read into as well: Firstly, the Rebbe once told of two people passing Crown Heights on the subway. One says to the other, “That’s where the crazy Chabadnikim are.” The second asks, “Why are they crazy?” To which the first answers, “They still believe they will bring Moshiach.” The Rebbe assented to this, later telling someone else, “I’m crazy about Moshiach.”

On a deeper level, the Rebbe’s first Chassidic discourse dealt with a topic the Previous Rebbe, Rabbi Yosef Yitzchak Schneerson, had broached: The ability to turn the “shtus” (foolishness) of the world into “atzei shittim” (cedar wood) of the Mishkan. This concept would lead to many of the radical ideas that Lubavitch used throughout those years until today in order to spread Yiddishkeit.

And finally, there’s an element of craziness that we all espouse – accepting the world in its false state, as an existence separate from G-d. The truth is, we need to be cognizant of the essential truth, that the world and all therein and thereout is just the Word of G-d. So some deep stuff we can reflect on here.
BUT, I don’t know if this was the right combination of tune and lyrics. I think it could have been worked on a bit more; especially with as a power of the original, “Ker a velt! Ker a velt HEINT!”

NOW the music: The intro is inexplicable. It reminds me a bit of Idan Raichel Project’s intro from DeScribe’s Stereo; the language sounds African. Besides that, it’s got some cool guitar and keyboard effects amid the country vibe. The vocals, as always, are splendido. So, I enjoy the song from a musical perspective, and just wish that the Chassidus could have been expressed with more nuance, and less for critics of Chabad to be able to laugh at.

Fighter: (***) More echoes of DeScribe on this number. What with the autotune effects and airy electronic arrangement, this song sounds like DeScribe jumped discs; or at least may have been involved. That means less of the guitar we’ve been hearing. But plenty of djembe or conga that sounds great. To me, the final words in the speed section are what make this song. Soldiers of light, indeed!

Stay: (***) In a western ballad with very slight country emphasis, the Bros. return to a subject that – to my count – they’ve covered twice before: the struggling frum teen. (Rabbi’s Son and Been a Long Time would be in that grouping as well; maybe even the track one stop earlier, Fighter.) Another complete picture, sealed off well with an excellent guitar solo and perfect multi-layered harmonies.

Freedom: (****) Rock anthem on the Golus to Geula flow. We walk into this piece with the same rock groove that Avremel used on his Kach Es Sheli. Echo provides a good entry for Shmueli, and Bentzi relishes his power guitar, from what I can pick up. Lyrically, Babylon is a good exilic centerpiece, and the expressions are one that we’ve all had. The song moves out of the heavy sound into a light bridge, which provides a nice contrast, and from there to the voc/drum crowd-pleader.

Royalty in Rhythm: (***) The entryway here sounds Carlebach-y; the reggae sound does not. The poetic genie runs free again, but the tune reminds me a bit of Play Your Music. The fresh perspective of Eishes Chayil/Shabbos is the reason why I look forward to every new 8th Day offering. The drums were an excellent way to segue out.

Never Afraid: (*****) The trump card of this record. The famous Russian words Nyeh Bayus Ya Nyekavo (I am not afraid of anything – see Fried’s Finale Medley on Yankel Yankel, or check out here: https://www.youtube.com/watch?v=TBEGnslWVBc)” collided perfectly with 8th Day’s typical lyrical and rhythmic genius. Having grown up hearing the stories of these superhuman Chassidim (here’s a sample of ‘em: http://shortjewishstories.blogspot.com/2011/08/stories-of-r-levi-yitzchak-schneerson.html), I love this. And again, a searing guitar solo hammers things home. One more gratuitous link – the “double-daring” reminds me of this humorous experience: http://www.chabad.org/news/article_cdo/aid/1514803/jewish/Prayer-at-13000-Feet.htm.

Getting back to the song, if ONLY Shmueli had picked up each “Nyet, Nyet, Nyet” towards the end of the chorus with ever-increasing growl – I think that might have just perfected this cool rocker.

Your Name: (****) A lullaby with just the perfect balance of saccharine and lack of cheese, ingredients that makes even this critic get a [little] lump in his throat. The reverb on the guitar alongside the keyboard is perfect, and the drum-stop at the end of each stanza is a solid, unique touch. And combine that with the kids saying bedtime Shema, and … extra points for cuteness factor without getting overkill. Another solid solo from the Hammond, and yup, score. Thanks SO much for not composing a tear-jerking, whiny or completely cheesy piece – excellent job!

Creative, fun, talented. It always works that way with these guys. I find particular enjoyment on Bentzi’s guitar skill; it’s has really been ratched up a few levels. Hooleh is another creative stroke of genius; another 8th Day album well worth a spin.