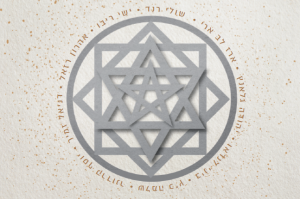 My ears are smiling. They were just treated to a musical spa – an album containing the spirited and spiritual, whimsical and wow: Simchat Olam, a compilation of songs by the eminent Kabbalist, Rabbi Yitzchak Ginsburg.

Rabbi Ginsburg has had his compositions performed numerous times in the past; most recently prior to this offering by Halev Vehamaayan (The Heart and the Wellspring). That group’s fiddler, Oren Tsor, brought his good friend and bandmate Nadav Bachar, aboard (or maybe vice versa); and it seems that this time it was Bachar who ran the show. Indeed, you can see Bachar’s exquisite musicianship, astounding skill and humor expressed throughout the record. The two are joined by a Who’s Who of Israeli musicians: Yosef Karduner, Shuly Rand, Yehuda Glantz, Danny Zamir, Erez Lev-Ari, Shlomo Katz, Aaron Razel, Binni Landau, Yishai Ribo and Bachar’s and Tsor’s own brilliant band A Groyse Metsie.

And here’s the set-list:

HaAkeida (feat. Shuly Rand): A deep, introspective song, reminiscent of a Chabad niggun, that is very befitting these awe-inspiring lyrics. Rand’s baritone and emotional output is an excellent match for the piece. The arrangement begins sparse, with a simple picking guitar, but picks up with an orchestral sound; instilling an appropriately dramatic feel. A bit surprising for the opener – I’d have gone with one of the faster tunes.

Hareini (feat. A Groyse Metsie): This stellar group of musicians had unfortunately disbanded after their second album, in this reviewer’s opinion the greatest album in Jewish music. So it was a thrill when I saw that they came together once again for this record. Indeed, their creative fusion is intact. The piece starts with a thick, hyped up klezmer groove; their fun falsetto harmonics add some excitement to the vocals, and a Middle-Eastern guitar solo rambles its way over the thick drums and groove, giving way to a violin/mandolin duet over a ramped up guitar. And oh, those drums are tight. Fun, as to be expected.

Ata Takum (feat. Erez Lev-Ari): An exquisite arrangement of a pretty song, and an excellent delivery by the Israeli singer. Lev-Ari puts out earnest emotion, and the arrangement lends a hand by walking him through. The instrumental piece that leads out is smooth and hits the right chords – but maybe the song could have used another time through the lyrics with it alongside.

Nachamu (feat. Shlomo Katz): Another nice song well sung, marked by pretty guitar pickings and a soft percussion that fills it out just perfectly. A great example of a song that can go either way, but with the right arrangements (every musician here plays his part to perfection) it just lifts it up to a whole new level – the slight whine of the guitar on the word “dabru”; the bass following, with the percussive violin; the bass drum and shaker; and a gentle but sterling fiddle solo ending things off. Boy.

Asher Bara (feat. Yehuda Glantz): Somewhat unexpectedly, this song is not your typical Glantz salsa mix; rather, it’s a funk beat with charango and mandolin, which is straight Groyse Metsie territory. Glantz does his thing well; triple-tracking himself. An olde-style trumpet joins the fray, just prior to a great fade-out effect at 1:38, marking Bachar’s love for musical surprises. Another great song with cool spots throughout. Hola Spanish speakers – que pasa at the end of the song?

Yedid Nefesh (feat. Yosef Karduner): Karduner, the Breslover soft-singer best known for his Shir Lamaalot, lends his vocal chords for another pretty tune, written with a Shabbosdik feel and somewhat similar to the previous two slow songs. If this song had been released 30 years ago, everyone would be singing it and no one would know where it had come from.

Odeh (feat. Binni Landau): The appearance of a penny whistle or piccolo alongside the mandolin gives this melody the appearance of a shul in Ireland. Simple tune + complex arrangement = works fine for me! And tis unknown singer sparks life from his high notes on the overdub.

Az Yashir (feat. Danny Zamir): Jazz is the name of the game for this wordless niggun, coming in a la a Chabad Niggun Simcha. Zamir gives it his usual gusto, with a virtuosic performance. This and Zamir’s later appearance are the highlights of this fantastic album; with the raw skill he demonstrates with every inflection. He’s followed not far behind by the ever-present Oren Tsor, who has folky twists at 1:28 and 2:44. Zamir even joins in the vocals, with his patented throaty sound (think the Yeminite “ayin”). After the hook at 3:04, Zamir launches into full flight, joined by Bachar’s electric guitar turbocharging things.

Keil Adon (feat. Aaron Razel): Another song of sweet mellowness. Tsor and Bachar as the backdrop to Razel’s apparent emotion? Successful match it is.

Nigun Chazak (feat. Danny Zamir): The intro here reminds me of MBD’s intro to the Yom Tov Medley on his Yerushalayim Our Home. The hyper-crazed nigun they blast into doesn’t. And the two sides of this awesome song fit together like ying and yang. And nobody could have pulled this off better than Danny Zamir – what with a warbling Hammond and the gentle electric guitar leading way to an absolute explosion of music, topped off by the old klezmer trumpet. And the humorously chosen sound effects. And… and… and…

Extra: an intimate recording of the chevra with Rabbi Ginsburg singing the aforementioned Nachamu, sounding like an old Carlebach gig from the 50’s. This is one of those strange phenomena appearing occasionally on albums. In the cartoon world, they call them “Easter eggs” (nothing to do with the religious items) – I don’t know quite why they’re done, and what added benefit they have, other than annoying us that the next song doesn’t go on. An obvious holdover from the cassette era. Like, whatever, dude.

You’d think that the preponderance of slow numbers here would work against the totality of the album, but it works out fine in the end. The choices were selected for their spiritual spirit as much if not more than spirited spirit, and they truly reflect that. Still, I wish there was a BIT more balance of energetic stuff. However, the vocalists fit their spots as if they were tailor-made for them, and they all seem to exhibit a real affinity for the tunes they were given. Score!

As for the arrangements? Ladies and gentleman, Nadav Bachar is a criminally underrated musician. When he and Tsor put their brains together and arrange stuff, pure genius results. They milk every last drop out of each song here, giving them all their very best look with emotion, feeling and energy. They have nuanced subtleties that elevate everything – little surprises and tweaks that are the slight brushstrokes of masters. As is their wont, they pull together an eclectic variety of genres, while keep the music universal and accessible.

This is a beautiful album, worthy of anyone who enjoys a niggun played with skill and artistry, novelty and respect.