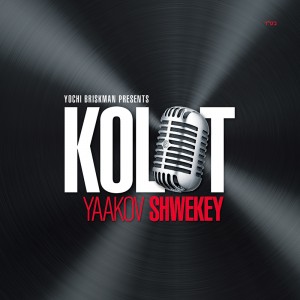 In 2000, R’ Shmuel Brazil released the album Shuvu, a compilation of new songs which featured some new and upcoming singers, including a young Sefardi vocalist from Brooklyn named Yaakov Shwekey.  Before Shuvu came out, friends of mine in the business tagged Shwekey as someone to keep an eye on–and I quote: “They’re saying he’s the next MBD.”

Fast forward nearly fourteen years.  Yaakov Shwekey is arguably the single biggest name in Jewish Music, literally selling out stadiums for his concerts in Israel and around the world.  R’ Shmuel Kamenetzky himself once told me how amazed he was that Shwekey was able to parlay his first album (especially “Racheim”) into such amazing worldwide success.

Shwekey’s newest album, Kolot, is a spiritual successor to 2010’s Libi Bamizrach.  Unlike his other albums, Kolot and Libi Bamizrach are Sefardi-style albums, without the yeshivish affectations and accents found across the rest of Jewish music, and many of the songs have original Hebrew lyrics and are not just ripped off of random pesukim.

Kolot was (of course) produced and directed by Yochi Briskman, and recorded at studios in the United States and Israel.  Arrangements are done by Amit Harel, Aaron Razel, Jeff Horvich, Udi Damari, or Yanky Briskman (depending on the track).

Track 1, “Am Yisrael” (Composed by/Lyrics by Yishai Lapidot): The master of Oif Simchas returns with his newest creation, a dance-rock track that will be perfect for either the first or last song of a concert.

Track 2, “Kolot”, feat. Shlomi Shabat (Composed by Tomer Adaddi, Lyrics by Yoav Ginai):  This slow ballad, the title track of the album, features Shlomi Shabat, who was also a special guest star on the Live in Nokia Stadium album which came out last year.  The song describes the “kol demama dakah“, Hashem’s “soft, still, voice”, as it joins with the whispered tefillos of Klal Yisrael.

Track 3, “Smeichim” (Composed by Yitzy Waldner and Yaakov Shwekey): Clearly destined to be combined into a medley with “Rau Banim” from Libi Bamizrach, “Smeichim” is a soft hora which featues lyrics from shabbos davening (um…tefilot shabbat?) and backup vocals courtesy of the Zemiros Choir.

Track 4, “Tefilat Kallah” (Composed by Elie Schwab): Another song which is guaranteed to be featured at weddings everywhere, this is a very sweet song which is taken from a tefillah that a kallah can say before her wedding.

Track 5, “Ach Sameach” (Composed by Udi Damari): This is your standard-issue middle-eastern-style hora, with words amalgamated from several sources: Likutei Moharan, shabbos zemiros, and morning brachos.  The basic theme is that a person needs to constantly rejoice because he was created a Jew.  Avi Singolda and Arik Cohen provide the very-sefardi-sounding guitars on this track, which is arranged by Udi Damari.

Track 6, “Zeh Hakatan” (Composed by Yitzy Waldner, Lyrics by Miriam Israeli): Miriam Israeli strikes again!  The lyricist behind “Yesh Tikva” gives us another masterpiece, set to a beautiful ballad composed by Yitzy Waldner and arranged by Amit Harel.  The song’s theme centers on the words we say at a bris, “zeh hakatan, gadol yihyeh (this little one, may he grow great)” and is dedicated to Yaakov’s young baby Moshe.

Track 7, “Osim Tshuvah”, feat. Metalish (Composed by/Lyrics by Dani Maman): Everybody’s favorite chassidishe rock group returns for this ’80’s-hair-metal-band rock song.  As usual, Dani Maman and Menachem Herman dazzle on the guitars, Yochi Briskman rocks out on the drums, and the incomprable Jeff Horvich plays keyboard and does the arrangements on this track.

Track 8, “Kamu Baneha” (Composed by Yitzy Waldner and Yaakov Shwekey): This album’s legally required Eishes Chayil rendition comes to us with arrangements courtesy of Yanky Briskman.  Just slot it into the chuppah rotation now and don’t bother resisting.  You will lose anyway.

Track 9, “Et Rekod” (Composed by Yitzy Waldner and Yaakov Shwekey): In my opinion, this song will be the one from this album which will become the song that starts every wedding second dance for the next year or two.  This high-adrenaline hora simply rocks.  The backup vocals by Zemiros Choir enhance the arrangements by Amit Harel, and Shwekey simply nails it from beginning to end.

Track 10,  “Assara Bnei Adam”, feat. Aaron Razel (Composed and arranged by Aaron Razel): You knew that a Razel Brother would appear on this album in some form, right?  This slow song (with lyrics taken from Tana D’vei Eliyahu Zuta) talks about the importance of Torah learning, noting that Moshiach will not come to the Jewish people while they are downtrodden and depressed, but rather when they learn with each other.

We all knew that Yaakov Shwekey is supremely talented–he can sing the phone book and people will be entertained.  For those of you who usually run the other way when you see an album labeled “sefardi music” (two thumbs pointing this way), don’t worry–there’s plenty to love, whether you were a huge fan of Libi Bamizrach or if you still think that Yedid was the ultimate Jewish album of all time.   Don’t be skeptical of Kolot; you may be surprised.