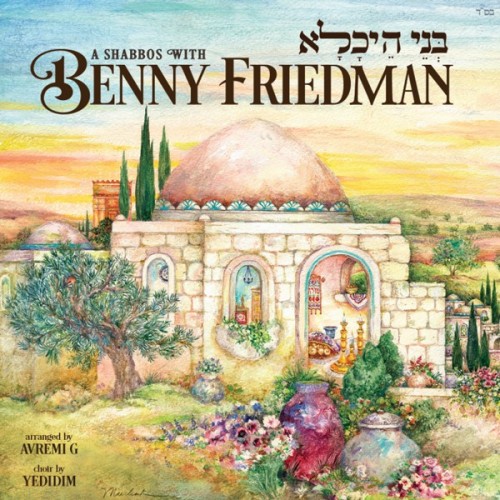 Goodness Gracious! I believe this is going to be my 6th review in about a month and a half period. I guess I just can’t help myself when there’s such good musicbeing released.

Today I’m going to be reviewing Benny Friedman’s “Bnei Heichala”. After Benny’s explosive “Yesh Tikva” release, The Jewish Music world has been eagerly anticipating a follow-up album. This album is the answer to those waiting. Instead of releasing an album of completely original material, Benny decided to go the route of the compilation album so we can all experience what Shabbos must be like in the Friedman household. All I can say is with the amount of songs on this album; the Friedman’s must either eat before they start singing, or enjoy cold cholent. This is because there are quite a number of great songs within this collection album and by the time they’re done singing them all at the Shabbos table it’s probably time for Mincha already. Since the album includes a number of songs per track of the CD, I don’t think it makes sense to explain each song separately especially since I believe the majority of these songs have all been previously released. Therefore, I’m going to review in my regular way track by track. Now that I’ve written my preface to the review, let’s get to the “cholent” of this review, the review itself!

1. Joy Is In The Air – Before I even start to listen to this song I’d like to point out that the naming of the songs was especially creative on this album. Now to get to track 1! This track starts off with a classic feel. The arrangements of this track by Avremi G (along with the rest of the album) are really stunning. He manages to weave each song into the other without any abrupt changes within the track itself. This song covers Erev Shabbos and will have you getting your house ready for Shabbos right away!

2. Gut Shabbos – This next set features one song composed by Miriam Israeli (The lyricist behind Am Echad, Yesh Tikva, Toda, and a few other tracks in the works by some well known artists).

3. Welcoming The Queen – This track seems to cover the period of Kabbalas Shabbos. It takes a lot of talent to fit those many Yiddish words in a line and still be able to hear them all, but that’s just apparently just another talent of Benny’s. If you’re thinking that this album is just the same songs you’ve heard before, you’re in for a surprise. Although many of the songs may be Shabbos Classics, Avremi G and Sruly Meyer (The producer of the album) made sure to add some flavor to every song in order to give it a new feel.

4. My Soul Wants To Sing – What would a Benny Friedman Shabbos album be without Benny’s “Shalom Aleichem” on the album? This track starts off with it and leads us into Aishes Chayil. The mix of songs starts off mid-tempo but works its way up to a much quicker tempo by the end of the track.

5. A Night Of Peace And Joy – This track begins with Ari Goldwag’s famous “Ka Ribon”. This medley focuses on songs in the category of Zemiros we sing Shabbos night. Again, you can hear obvious enhancements to the original arrangement of these songs. Avremi G really outdid himself on this entire album.

6. Singing With The Angels – In Chronological order this next mix consists of songs chronicling the Shabbos Morning davening. The medley starts off with an old track from Chazzan David Werdyger moving into an MBD tune. From there as long as we’re already keeping things Chassidish the next two songs in this medley are from Viznitz and Chabad.

7.Hashem Truly Loves Us – I know it’s a Shabbos album but with a title like this one I half expected to hear Ari Goldwag’s “Hashem Loves You”. Oh well. The Yedidim choir who did a fantastic job throughout this album starts off this track leading into MBD’s “Chukoiseha”. This medley consists of songs fitting into the Shabbos Day Zemiros. The track turns from slow and soulful feel to a Middle Eastern one with the tradition Sephardic Dror Yikra (You know the one your Shabbos guests always attempt with exaggerated Sephardic haavarah?) Well Benny pulls it off perfectly without overdoing the sephardi-ness of the track.

8. Children Of The Palace – Similar to track 2, this set also only features one song, the title track of the album “Bnei Heichala”. According to the CD booklet this is a Chabad song. Although this song might be a Chabad favorite, I have a feeling that this song might make the rounds among the other Jewish sects as well. This is a very hartzige song that isn’t too complicated to learn or to sing for that matter which will definitely help make it a new favorite at many Shabbos tables around the world.

9. Echoes Of A Holy Day – This medley focuses on songs to help us stay uplifted even when Shabbos has just ended and we are stuck back in our mundane week. This song features the old time classic “Shabbos Is Going Away” as well as the Breslov “Bemotzai Yom Menucha”. On “Shabbos is going away” we hear a child soloist labeled in the CD booklet as Yankele Friedman. I’m not sure if this is Benny’s son or perhaps if he is introducing a nephew to the Jewish Music scene like his Uncle Avraham Fried. I have to be honest, I liked the Kumzits style choir on the Breslov song but I’m not sure what the coughing at 2:43 was about. (Was there a chap there that I didn’t get? Maybe he breathed in the smoke from the extinguished havdala candle by accident?)

All in all this is definitely an amazing album to not only add to your collection of Benny Friedman CD’s, but also to your pre-Shabbos playlist. Not only will you be able to dance around with your broom while you sweep the floors for Shabbos, but you’ll also find yourself singing whatever songs you don’t already at your Shabbos table!