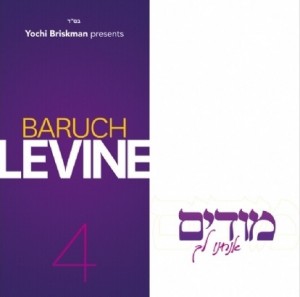 The past few months I have been on an unofficial leave of absence from JMR (no worries guys…it was paternity leave) but that hasn’t stopped me from listening to and enjoying some of the recent releases in Jewish Music. One release in particular, Modim by Baruch Levine, has really captured much of my listening time and, in my opinion, is one of the best albums to be released in a long time. Baruch has always had a real taam to his songs and this album is no different. However, he has managed with this album to combine his special sound and also the current modern sound…two distinctly different sounds that usually do not mesh well together. This is an album that not only is being enjoyed now, but will be added to the rest of Baruch’s collection to be enjoyed for many years to come. The album, as all his others, is produced by Yochi Briskman and the arrangements are split between Baruch himself and Yochi’s son, Yanky Briskman, an ultra talented superstar in his own right in the Jewish Music Scene. Without any further introduction, here are my song by song assessments:

Umocho- I have written before about Baruch being one of the only artists that could start an album with a slow song, and this song is no different. Most times an artist would want to start off with a bang. What makes Baruch so special is his haartz and sweet songs. This song starts off so nice and sweet and for anyone who reads that the song is dedicated in memory of 2 bochurim who were tragically taken from us, it is so poignant and heartfelt. The song does eventually become more upbeat (which fits in with the words that Hashem will wipe off the tears from all faces). The song is expertly arranged by Yanky Briskman and the men’s choir are members of the Mesivta of the Yeshiva of Waterbury Choir. I especially enjoy the various guitar solos on the song.

Toda- The style nowadays is to have an upbeat ivrit song and Baruch doesn’t disappoint with this song. The lyrics are written by Miriam Israeli, who has written many of the recent ivrit songs. The words are thanking Hashem for everything we have and are not very hard to understand. This is a real pick me up after the last song and very enjoyable.

Acheinu- However many times I say it will not be enough, but the signature Baruch Levine song is the beautiful slow hartzige song, and this song is another one of his signature songs! This song features child soloist Yechezkal Ginsberg (I am guessing the brother of Dovid from Baruch’s last album).

Uforatzta- Ok so I have to say this song is coming out my ears in a very good way! My children have made this song their favorite recent song to come out and ask for it to be played every time they get into the car. It’s catchy, fun and also helps that it’s in the parsha one of my girls is learning now. The song, arranged by Baruch himself, is a mix of a techno/electronic arrangement and also regular good old fashioned instruments. The video that came out with this song (http://tinyurl.com/l3rlbq7 ) is also very tastefully done and enjoyable.

Modim- I am running out of adjectives for Baruch’s slow songs so beautiful will just have to do for this song. Complete with some sweet and soulful saxophone solos and featuring 2 child soloists, Yechezkal Ginsberg and a very youthful sounding Yisroel Levine (perhaps Baruch’s son…if so then the apple doesn’t fall far from the tree) this song is just beautiful!

Eileh- While Baruch’s slow songs are what make him most famous, equally enjoyable are his lebedik songs, which have such a yiddishe taam to them. This song, arranged by Baruch, is another one of those songs. Its arrangements are cutting edge but at the same time the taam isn’t lost amongst all the horn lines and guitar riffs.

Tiferes- This is a mediterranean style horah that is very melodious and arranged masterfully by Yanky Briskman. I like the semi chant in the middle of the song followed by the choir singing and then Baruch modulating to the next key. This is another very pleasant and enjoyable song on an extremely solid album.

Shifchi- I think that on this album, Baruch really proves that he is not only an amazing composer, an amazing singer but also an amazing arranger. This beautiful hartzige ballad is simply arranged to start off the song, but it is perfect and exactly what the song needs. In fact, the arrangements don’t really pick up until the last 1:10 of the song…but in my opinion (and it’s my review so that’s all that matters now) that’s the beauty of the song and its arrangements.

Taamu- The finale of this unbelievable album is a disco horah that is a prototypical Baruch Levine song. I know that this sounds so repetitious but I am not sure what else to write. Baruch is just a special talent and such a sweet person. His albums reflect that!

In conclusion, this is one album that if you don’t have it yet, you don’t know what you are missing! You can either buy it at http://www.mostlymusic.com/modim-anachnu-lach.html or wherever quality Jewish music is sold!