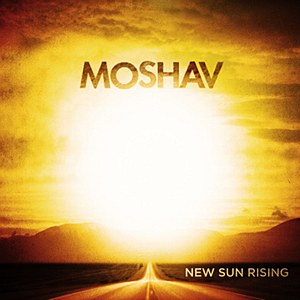 I will start off by admitting that until yesterday I never really listened to Moshav. Ok, sure, Iv’e heard to their cds many times before. Iv’e found myself singing their songs and strumming their guitar riffs many countless times since their first albums. And I’ve always absolutely loved their stuff..
But… still..
I’ve never really listened..

Really listening by the way, (as Iv’e said here many times) means sitting down and shutting out all the outside noise from your ears and mind.

Moshav Band is a  unique group. They’re completely Jewish and yet they  are the closest thing  to secular sounding music that is to be found in a charedi mainstream Judaica store. Which makes it harder to really label them.
Theyr’e definitely Jewish. Theyr’e all Jewish themes and messages, and they even have many Israeli, and traditional sounding Jewish tunes and Niggunim interspersed throughout. But this is where the simillarities end.

The music styles, over all sound and production is really unlike anything you will hear on a mainstream Charedi Jewish album. A lot of the music is decidedly secular sounding. They do actually have a big yeshivah guy fan base beleive it or not. Just stop in to any  one of their popular Chol Hamoed concerts in New York to see what I mean. But still they have not really crossed over (yet) into charedi circles . Wether they ever do so and develop a large Yeshivish fanbase like eighth day succesfully was able to do (with the epic smash Yaalili) remains yet to be seen. I personally can’t see  it happening any time too soon. But hey. you never know!

The two lead vocalists Yehuda Solomon and David Swirsky grew up together on Shlomo Carlebch’s musical village named Moshav Modi’in. There, they grew up with out any of our modern material comforts. No electric. No fridge. But one thing they did have was a record player. The boys would listen to music and sing together all day. They would even perform on occasion with Shlomo. Sholomo was like a father figure to the Moshav dweller there,  and still is one of their biggest life and musical influences.

Slowly but surely, they began developing  a large fan base. Over the years this fan base grew bigger and bigger.

After blowing up huge on the American scene, touring colleges in 2000, they decided to move to LA. They soon added on the drummer and guituarist and currently perform to sold out audiences around the world.

The songs themselves are a mixed bag of electic styles. Ranging from alternative rock, to folk rock, to reggea and blues. Infused with a heavy  carelbach influence and combined with heavy Middle Eastern sounds and music.

Oh, you can bet your bottom dollar these guys know what their doing. They can sing like nobodies buisiness. They can jam. They can rock..for real.. like the real rockstars that youll hear on the radio, or on any top mainstream rock album. And they do a mean authentic reggea. Yeh.  They can sing in just about any style imaginable.   These guys have the chops to show. Theyre the real deal.

But what really makes them so unique is their message. That is what I just discovered today. Who these people are and where their coming from. And most importantly the tremendously deep meaning lying beneath the surface of all their music. The genius depth behind their seemingly simple lyrics..

..In other words I really listened.

One last thing worth mentioning here before I get on to the songs. I’ve noticed something interesting about Moshav. These guys feel their music. They live their music. And they breathe their music. Listen in close and you will see what I mean. As they sing it they feel it. And deliver that feeling. The result is refreshing and uplifting. Sort of like the intoxicating taste of a cool sea breeze  filling up your lungs as you walk on the beach one late summer evening. Yes, intoxicating is the word.

The album starts off with a happy little Mizrachi sounding niggun being sung over a funky disco beat. And then  none other than our favorite reggea star Matisyahu comes on doing a bit of Reggea.

..and at 54 seconds in we have the rocking refrain “The whole worlds on fire. flames are getting higher.”

And its back to Matis. He’s sounding really fresh here by the way.

And back again to the riveting chorus.

At the final bridge, you see why Moshav could be on any mainstream radio station, if they had so wanted.
This rock verse sounds like anything you’re gonna hear on the bilboard top 10 charts.

Finally as the song wraps up we get chorus played over the harmony and over Matis doing his Reggea bit all together at once!

This fun and addictively catchy Jamacian scat jazz ( and rap and reggea) song is actually  very deep. Its about starting over again and moving on from your past failures.

The message here is that you gotta love yourself. You gotta say “I am now ready to move on.” And you gotta be able to accept the fact that you’re just not perfect. Once you do that. Once you realize how awesome you really are, you can move on and accomplish endlessly. You can change the world!

Musically this song is brilliant. Its only 2 and a half minutes long. And yet there’s so much going on. So many different parts to this track.

This is awesome! You can here the song building process here. The song starts off with just a electronic beeping sound, and then somebody says “Here comes a sick guitar.” And sure enough we get some really sick guitar (and drumwork) work here!

This song is a mix of swing and country and rock. But its mainly rock. Theres a lot of awesome harmonies and background vocals going on. “Every body find your way back to the road. Gotta get ourselves out of this jungle!”

MAN!! This piece is addictive and  contageous.
It just keeps building up more and more high energy momentum until the end at 34:0 where it does the final chorus in a slower and calm finale.

This song will  keep you on track when you’re feeling down.

This is my favorite song on this album! I just can’t get enough of this! The crazy vibes here are just off the charts…

This song is about a topic which is very important. Finding you’re own particular path and way in life. And the chorus is addictive. Yehuda’s vocals are real prowerful… But when you add David’s vocals here you get something really special!  “Give me some hope for tommorrow  strength to get back up. Give me some hope for today.  strength for tommorrow.”

We each have our own unique talents and unique personalities. We’ve got to use those things to find our way.
This is so important.

This blues song is my second favorite song. The style and sound reminds me a lot of the great Moshe Yess of blessed memory.

It starts off with David sounding agitated and restless as if hes locked in a cage singing “Break these chains… Wanna Break these chains… Wanna bust out of this cage!” The chorus is very very interesting here. It sounds like a fast yeshivish kind of melody. “Theres a new dawn rising. Open up my eyes! Wake up my tired little bones. I’ve been too long crying. slowly dying.”

Following this is  “Oh yeh. Yeh yeh.”
chanting thing at the end.

This happy song is about Techias Hamesim. But its also about waking our selves up now from our galus induced slumber.

YEHUDA SOLOMON!!!  You’re voice is a piece of heaven!!! Can’t get over that voice..Man! Its slightly deep but sweet as honey and so rich. And oh so  colorful.
This Middle Eastern sounding song is a time machine…
And a hope machine.
This song literaly took me out of my room as I listened. It took me back a few thousand years, as Yehuda paints us a picture of our birth as a nation and our struggles throughout history.

Through the deserts and foreign lands. Through the seas and scorpinions.
And finally to Jerusalem our precious home land!! The song finishes off with a soulful “Shalom Aleichem” melody.

And as I’m listening to this now, Im dreaming. Dreaming of finally coming home.. to our homeland.. Yeh. I’m dreaming..

This is a  haunting backwoods kind of
sounding folk song with a lot of brilliant guitar work and a beautiful niggun. You gotta listen to these lyrics a bunch of times to really understand them.
it is the story of a neshama which goes through several incarnations and makes it s way back to where it started.

This has a real 90s feel to it. Man, the nostalgic feeling here! Its really weird how music can do this.. I mean this song is just taking me back years now.. I’m traveling… (now you’re getting what I meant by the strange title of this paper :)

Anyways, this song is very simple and catchy. Its a real feel good kind of song. “Coming our way …. THERES GOOD THINGS COMING OUR WAY!!

Interesting, In the end, that Middle Eastern  bridge sounds like something I heard on a  Shwekey album recently.

This hauntingly deep folk song, my second favorite on this cd, is a very reassuring kind of song. Sort of like a mini instant pep talk and confidence booster.

I’m loving the expert and moody guitar work over the steady percussions here.

And the vocals. David Svirsky with his chillingly direct and raw emotional way of singing. His voice is a bit higher keyed then Yehuda’s and somehow just perfect for this song.

It repeats the same refrain “NOT TO BE AFRAID” over and over after each small verse about making it across the narrow bridge to the other side.

This song should be required listening for any one going through some kind of tough situation.

Finally it ends off with
the famous tune from Rebbi Nachman “Gesher Tzar Meod.”

Not sure why. But this song is giving me an 8thdah kind of vibe now. Man! their voices even sound like the Marcuse’s here!

Anyway, this rock song is about finding  the truth and asking god to spiritually light us up.

The song starts off with the passionate chorus “Will you light me up? light up.. light up.. the night.”

As the song goes on it sort of starts sounding a like a mix between Bob Dylyan and Simon and Garfunkel, but heavier and harder.
The chorus is getting heavier and louder now. It continues on this way, repeating over a few times til its lodged firmly in your head -“Will you light me up?”- and then finally closes out the album.

To put it simply, this album is going to be taking you you places you’ve never been to before. Its gonna reach in to your innermost yearnings hopes and aspirations. It is impossible to listen to this and not become transformed. Impossible.

And each time you listen youre going to get something new. Yeh. This is one of those albums that just keeps getting beter with each listen. There are no filler songs here. Just an houre of pure exhillaration and inspiration. It will change you… Its time you  treat yourself to something different.. something good.. really good.. so.. get out there to your local Judaica store  and give this new Moshav a try… Trust me…Youre gonna thank me you did!