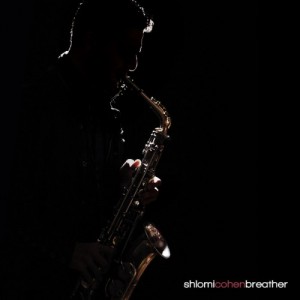 UPDATE: Thank you so much to Shlomi Cohen for his feedback on the first version of this review.  Apparently, my ear isn’t as good as I thought it was, and I misidentified a few of the saxophones on the album.  All edits in the review are noted.

In order to understand my automatic attraction to Shlomi Cohen’s album Breather, you need to know a bit about me.  My father used to play clarinet for various well-known orchestras in the Philadelphia area and I have played clarinet and saxophone since high school (my former yeshiva roommates can attest to my seemingly never-ending practice sessions).  I may have attained some degree of skill by the time I was in beis medrash, and in camp concerts I had the opportunity to play with several well-known artists.  When I got married, I stopped playing professionally, but I have always tried to keep up my skills in the woodwind department–after all, you never know when they could be useful–and I always try to introduce myself to skilled woodwind players at weddings and concerts to pick up tips.

Breather connects with me on a fundamental level because it showcases a sax player at the very epitome of his craft, playing and enhancing songs we all know and love while making his instruments absolutely sing.  Shlomi Cohen (who has been nominated for a Grammy Award for his work on the album Frutero Moderno by Gonzalo Grau & La Clave Secreta) exhibits his mastery of seven different instruments on this album, while displaying evidence of his background not only in jazz, but in Jewish, Morrocan, and Teimani music.  Overall, the arrangements on Breather are a modern jazz-fusion style, similar in many ways to Jeff Horvich’s Trax To Relax and Jewish Jazz Café albums.

Track 1, “Ani Ma’amin” (composed by: Abie Rotenberg, first appeared on: Dveykus IV): The opening track of Breather gives us a preview of what is to come on the rest of the album.  Cohen takes a very well-known song which has been sung at kumzitzes and weddings for more than 20 years and redefines it in a unique fashion.  His alto sax playing in this track ranges from sweet in the beginning of the track to raw open-throated power at around the 3:30 mark.

Track 2, “Anovim” (composed by: Yossi Green, first appeared on: MBD 25 and The 8th Note): Everyone’s favorite chasuna dinner music/shabbos kedusha song has been given the Shlomi treatment on the soprano sax.  Eldad Zitrin and Ruslan Agababayev provide the jazzy piano and keyboards and Yohai Cohen does percussion in this souped-up version of Yossi Green’s classic.

Track 3, “Lulei” (composed by: Mona Rosenblum, first appeared on: We Are One by MBD):  Another MBD classic, this version of “Lulei” is possibly the most rocked-up remix on the album.  The second time around the song shows off Shlomi’s prowess on the alto , with added harmonics, growls, and altissimo notes added in as the track progresses.

Track 4, “Acheinu” (composed by: Abie Rotenberg, first appeared on: Lev V’nefesh I): In my opinion, one of the best parts of modern jazz and fusion music has been the emergence of the soprano saxophone as a mainstream instrument. Shlomi’s rendition of “Acheinu” reinforces why that is so–used correctly, a soprano can take an already hartzige song (and it doesn’t get much more hartzig than “Acheinu”) and take it to a whole other level.

Track 5, “Adon Haslichot” (Traditional): One of the only songs on the album I didn’t already know, this track takes the old-school/modern blend up another notch, with extra delay effects and  rocked-up drums combining with a debka beat and  jazzy-and-maybe-middle-eastern-style backup vocal (courtesy of bass player Panagiotis Andreou).   Tenor sax features prominently on this track, as does off the charts soloing and stretching of the  tenor’s range (it’s not supposed to be able to go that high!) [EDIT: Tenor isn’t supposed to go that high either!].

Track 6, “Mama Rochel” (composed by: Abie Rotenberg, first appeared on: Journeys IV): One of these days, I will have the debate about which song is the Official Number One Greatest Abie Song Of All Time, but I will not accept any list that doesn’t include “Mama Rochel” in its Top 5.  Shlomi’s soprano sax rendition of Abie’s instant classic is, if anything, a bit understated, but sometimes the genius of a performance is in its simplicity.

Track 7, “Misirlou” (Traditional): “Misirlou” has been through many remixes and renditions in its nearly 100-year history, most notably the 1962 Dick Dale guitar rendition which made the song famous in the United States.  Shlomi Cohen’s  alto sax version recalls the song’s Greek/Middle Eastern roots, and features a trumpet solo by Albert Leusink.

Track 8, “Keili Ata” (Chabad): In my experience, one of the most difficult parts of playing tenor sax is to get the attractive tone people are expecting while being limited to a lower subset of notes. Shlomi Cohen obviously doesn’t have this problem, and this track demonstrates this definitively.

Track 9, “Od Yeshvu” (Composed by: Yossi Green, first appeared on: The Double Album by MBD): Shlomi’s alto sax makes a return in this heavily remixed version of MBD’s ageless hit.  The jazz waltz beat, together with Eldad Zitrin on the Hammond B3 organ, provides a unique, swingy sound which will either delight or horribly offend fans of the original.

Track 10, “Tzur” (Traditional): The other song on this album which I was unfamiliar with, this song combines a traditional Sefardi feel with a very modern arrangement, complete with a solo on the Yamaha WX5 wind controller (which is a synthesizer you can play like a sax).

In short, I fell in love with Breather the instant I started listening.  Shlomi Cohen’s insane abilities on all of his instruments shine through in every track of this album, and it’s obvious that he is a true woodwind virtuoso.  I can’t wait for Breather 2.