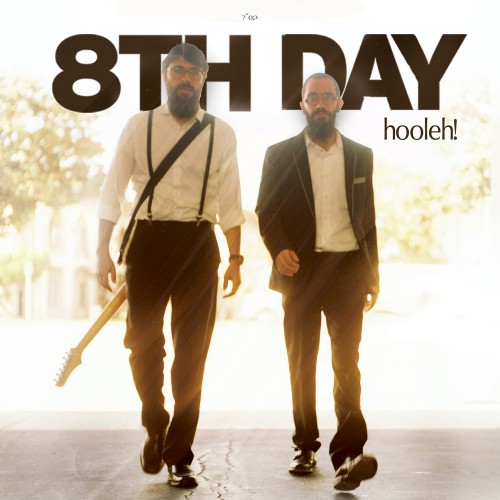 The time has finally come to write a review on a new 8th Day album. I find that every time 8th Day comes out with an album, everyone anticipates the next one more and more. 8th Day is one of those bands who have not followed the norm, but have paved their own path through the Jewish music scene. Their catchy songs, different arrangements, and vocal harmonies give them an edge compared to the typical Jewish singer or singing group. Let’s dive in!

1. Hooleh – This first song is the title track of the album. In this track I already pick out a number of different styles from disco to Caribbean, it definitely stays true to the diversity that we’re used to from 8th Day. Also, now that the Yallili has quieted down a bit, get ready to add a new word to your vocabulary, Hooleh!

2. Wait For You – The verses on this next track are nice but I think the Chorus really shines on this specific track. I like the synthesizers and organs mixed in to make the arrangement interesting.

3. Sing Along Song – In countless Jewish albums we marvel at complex arrangements and instruments that are out of the ordinary, but very few have stripped down a song so that the lyrics shine through instead of the arrangement being a main focus. This entire track is played with just a Ukulele and the lyrics, and vocals as well as the vocal harmonies stand out as being the focus of the song.

4. Thank You – From the start of this song you can already hear a fair amount of diversity between the synthesizers, pads, and other contributions to the songs arrangement. Around 2:53 is a great guitar solo leading into some Chazzanus at about 3:20.

5.Ker A Velt – I like this song but I don’t have anything too specific to point out about it. It’s a nice slow tune with great words.

6. Fighter – This next track is another classic 8th day song with uplifting lyrics. This one as you may have guessed is about being a fighter instead of giving in to the nisyonos we all have.

7. Stay – Similar to Ker a Velt this song is an “easy-listening” kind of song. It’s a relaxing tune with nice harmonies on the chorus. Many people listen to 8th Day’s songs and have no idea what they’re talking about, but I believe that they write their material based on their own experiences but also in a way that the listener can apply the lyrics to experiences of their own. Many songs seem to have a relatable style of songwriting.

8. Freedom – This next track has a great heavy feel.  I love the snare sound starting at about 3:07, very creative. Some great guitar solos in there as well.

9. Royalty in Rhythm – Although you probably wouldn’t guess it from the name this next song is about Shabbos. After hearing “It’s Shabbos Now” I think this can be a contender for their next popular Shabbos themed song. On the other hand, maybe this is their subtle way of reminding you to buy their cousin Benny Friedman’s new Shabbos collection album.

10. Never Afraid – This next track tells the story of a prisoner who regardless of his situation is “Standing tall”. I wonder if after 8th Day’s part on the Unity project as well as Bentzy and Dovid Dach’s Yedid Nefesh if this song is about Sholom Rubashkin but the booklet doesn’t seem to clarify. I think 8th Day fans would love to see on future albums a couple lines under each song within the booklet explaining the meaning behind each song.

11. Your Name – 8thday ends off their album with another “Easy-listening” track. Take out your rocking chairs and your headphones and get ready to drift off into the sweet melody of this 8th day song. Make sure you have your music player set to start the album again so you don’t get disappointed when the song ends and you realize it’s the end of the album.

Overall if you find yourself constantly saying that Jewish music needs more diversity, 8th day might be your answer. While this album features some great synthesizer and guitar parts as well as an entire song performed by a ukulele, their past albums have just as much diversity even dating back their first album “Tracht Gut”. 8th Day is definitely something different. Go and pick up a copy of this album or at least a download if you don’t want to have to trek to your local Jewish music store in the snow.