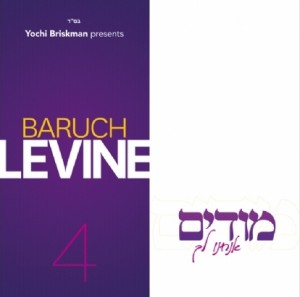 Baruch Levine is the Abie Rotenberg of our generation. His songs simply have the ‘IT’ factor. Though not necessarily wedding hits, Baruch’s songs get sung at Shabbos tables and included in kumzitz’s across the Jewish community. I often am unable to form an opinion on an album until 4 or 5 listens. In this case, I instantly knew that his songs would become instant classics. Even my children, from 11 to 3, sing his songs with their neshama. “I want to hear Hashivenu” my 5 year old son says. He and his 3 year old brother, do a mini kumzitz with some of the songs from this album before bed each night (this is without my encouragement!).

The songs present much feeling and depth.

The album came out shortly before Sukkos and we started listening to Umacha as we built the Sukkah. The musical arrangement of this song is unique in that it starts slow and heartfelt, but turns into an upbeat rhythm representing the positive wish that we all hope for in the tefillah of this song.

Toda is a feel good song with great lyrics. There has been an ongoing question of late relating to songs that have lyrics that are not based in the Torah B’ksav or Baal Peh. I personally, do not have a problem with fresh lyrics as long as the sentiment is positive. We need to be thankful to Hashem for everything we have in this world including the world itself!

Acheinu starts out with a sound that makes you feel as if you are in the old city, ready to join your brothers at the kotel singing this song hand in hand. This is an example of a simple yet, powerful song that will catch on very quickly.

Uforatzta is a unique hora. My 8 year daughter informed me that it has made its way into the local Bais Yaakov elementary school routine. The tune is used as part of the girls’ Hashgacha Pratis program. My fear is that this song will be overused quickly. In the meantime, this is what everyone is singing!

The title track, Modim, is a very pretty song. In the beginning, the arrangement is simple with an emphasis on guitar to make this sound like it is meant for a kumzitz. As the song builds there is more of a jam taking place with really nice sounding saxophone and choir parts. This song makes a great dinner song for a simcha.

Eileh is a nice soft rock ballad highlighting words from Tehillim that we say almost every day in davening. This song is easy to learn, sing and dance to!

Hashivenu – From the very beginning of the first listen of this song I was hooked. This song is beautiful in both its meaning and the music. I hope that this become an instant kumzitz classic. My two sons, ages 3 and 5 are both hooked as well!

Tiferes – Typically, when coming across the words Avraham Yagel during Shabbos mincha, my mind automatically thinks about Avraham Fried’s classic. Now, I have found myself humming this tune during chazaras hashatz!

Shifchi – Simply put, Baruch takes meaningful words, and places them in a tune that enhances their meaning.

The community at large needs to know these songs. Twenty years from now, we will say, remember  that song Shifchi Kamayim? Modim? Hashivenu?!