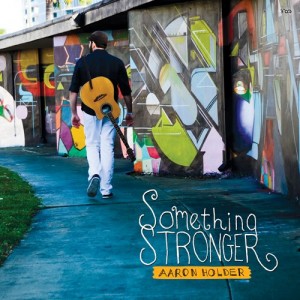 While we’ve been overrun by talent contests of all types, there have been a few bright spots. One of them is Jewish Star alum Aaron Holder, who has recently released his debut album, Something Stronger. You may remember Holder’s unique Marianas Trench-deep baritone, but don’t think he’s one a dimensional artist. Rather, he produces a veritable palette of vocal tones and colors; his overdubs are particularly scintillating. His songs are his own compositions; furthering his credibility as an artist with a future.

The album alternates between light jazz, soft rock and light alternative pop, with a dash of country. The lyrics are nicely constructed; though he occasionally falls into the trap of repeating phrases in different songs (variations of “Come on home” appears in several songs). A very chill album results; it’ll please fans of the likes of Gershon Veroba, Rav Shmuel and Moshe Hecht.

The album begins with my favorite track on the disc, Miracles. The light, breezy piano fits perfectly with Holder’s airy vocals, and the gentle but elegant arrangements match with the graceful harmonies. Something Stronger, the album’s title track is a light jazz piece with excellent lyrics. This song could have been extended a bit, as it’s a really nice composition, and was deserving of a bit more time. Don’t Walk Away and Last Night’s Talk are lyrically more secular, but both light and easy to take in. The former has some great harmonies by some of Holder’s friends.

Meant to Be returns to more overtly Jewish songwriting, and is a feel-good anthem, sung with passion. A gentle picking guitar leads begins the tune, kicking into the power chords. Sweet lyrics are underlined beautifully by the alternate lyrics in the harmonies. But again, the tune ends just as you’re really getting into it. The next number, On My Way has some excellent exhibitions of his depth control in the harmonies – the result is stunning. Seriously, he’s got great range! I’d have liked to hear more complicated banjo-work, but still, this is another very well crafted song.

In an ode to the Israeli soldier, Holder rips off a beautiful piece in Promised Land. Mid-songs he changes paces into a rocker, to great effect. The next song, Senses, is another beautiful composition; Holder again uses the baritone to great effect – this time in the foreground of his solo, and then pumping it up with power towards the end of the piece. Great message, and excellent production.

The last two songs fall off the playlist for me, with no message of importance in either What I Like or Back for More, and similar subject matters; although the latter’s tune is nice.

Again, a beautiful debut. Much to appreciate – most of all, that vast vocal range! Harmonies are stellar, the arrangements  – by Ovadia Tank , and ear-pleasing mix by 27 time gold and platinum winner Steve Gordon – are thoughtful yet subtle. The only weaknesses are in the relative similarity of some of the compositions and in the lack of a strong Jewish message in a few of the songs; and if you’re reaching, you can kvetch about the short length of the tunes – with 6 songs under 3 minutes. But hey, if you’re saying they’re too short, that’s probably indicative of something good!

We’ll be seeing more of Aaron Holder – and for good reason! Check out www.aaronholdermusic.com for more.