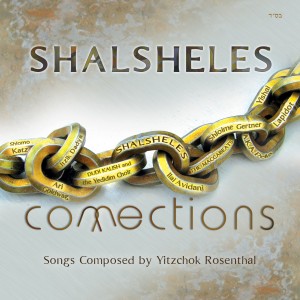 Their songs have topped countless playlists for well over a decade, but with the release of Shalsheles Connections, music lovers may just find themselves falling in love with Shalsheles all over again.

While many artists have come and gone over the years, Shalsheles’ staying power is the simple beauty of their music.  With this, their sixth album, Shalsheles weaves together a musical tapestry that incorporates their signature sound with a collection of talent as unique as it is diverse, with guest appearances by Shloime Gertner, Shlomo Katz, Yishai Lapidot, Itzik Dadiya, AKA Pella, The Maccabeats, Dudi Kalish, Ari Goldwag and Yedidim Choir as well as the album debut of child soloist Ilai Avidani.

While as on the previous five albums, Yitzchak Rosenthal continues to churn out one fabulous song after another, Shalsheles Connections, under the direction of Simcha Sussman, moves in a slightly different direction with the addition of CD Eichler wearing the producer’s hat.  With Eichler at the helm, Shalsheles Connections imbues the vintage Shalsheles sound with a flavor that reaches just a little farther, adding in equal doses of creativity and sophistication that makes the music sound like Shalsheles, only bigger and better than ever before.

Arrangers Ruli Ezrahi, Dudi Kalish, Yoely Dickman, Aryeh Kunstler, Eli Cohen, Yitz Berry and Twostone do a solid job of giving each of the twelve songs its own unique flavor and thirteen years since they first wowed us with Esa Einai, Mi Haish and Ekra, Yitzchak Rosenthal, Simcha Sussman, Baruch Aryeh and Chaim Block continue to dazzle.  From the heart stoppingly beautiful Yaaleh to the energetic Sameach to the flowing chords of Hinei Kel, Shalsheles Connections is that one album that you are going to put on repeat, again and again and again.

Shalsheles Connections is being distritubed by L’Chaim and is available in stores, at www.MostlyMusic.com, and for download on iTunes at  https://itunes.apple.com/us/album/shalsheles-connections/id762634100 and on Amazon at http://www.amazon.com/Shalsheles-Connections/dp/B00GU19HCA/ref=sr_1_1?ie=UTF8&qid=1385130167&sr=8-1&keywords=shalsheles+connections  .  For more information on Shalsheles, visit them at www.shalsheles.com or on Facebook at ww.facebook.com/Shalsheles.