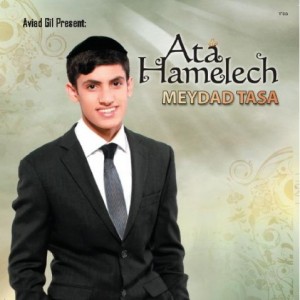 Child soloists – they’re an enigma. Most of the time, even when they’re really good, they flare out quickly. Oftentimes, they’re chosen because they can hit high notes, but not because they are truly talented.

And then there’s Meydad Tasa. A kid who had impeccable control, dramatic and artistic feel, and a pure professional quality that was, at the very same time, real and innocent. Two of his child albums, Al Naharot Bavel and Ben Shel Melech, are often playing in a stereo system somewhere in my house.

Two truly excellent albums. So the question remained: What would happen to the adult Meydad?

Honestly, I was a bit worried when I heard his first mature vocal offering – Kol Dodi, released on the Shmorg (and later on his Ashkenazi-style album Gadol Hashem). While much of the problem there lay with the producers of that song and album – WAY too much orchestration, dudes! – still, was this it? Is that all his formerly golden voice could produce?

Thankfully, the answer would be no. A definitive no. And that’s because now we have two excellent albums in his mature stage. (I have not listened to Gadol Hashem completely, but I appreciate the styles of these two over that one, by far – he’s a Sfardi/Israeli; not an Ashkenazi Chareidi. And his true success is with the musical styles of the former, not the latter.) I’ll grant you that I don’t know if he’ll ever be able to top his earlier recordings, but that would be an extremely tall order. For now, let’s enjoy what we have here.

A very upbeat album, with a lot of styles mixed in, showing Tasa’s range and ability. He starts with the excellent (not upbeat, though) Oy Nah Lanu – no strain, clean emotion. His voice flutters in his patented Sefardi style. And the song ( – with excellent lyrics – is it a piyut? I don’t have the liner notes – ) has excellent production, that seems to be Aviad Gil’s continuously brilliant work. (The only thing I do wonder about his production is why the harmonic overdubs are so far behind in the mix. Bring ‘em forward – there are some great vocals there!) Ata Hamelech is fairly standard Mizrachi-pop; Meydad kicks out an excellent version of it. And my only gripe is a technical philosophical one – he mixes the word “Ani margish kol kach mushlam” – if you are serving G-d properly, your own “essence” should be nullified. Hence, the term “I feel/ani margish” doesn’t exist in your lexicon. (See umpteen essays on the subject within the Chabad library.)

Onwards. The record has 3 totally awesome pieces in Kol Ma She’ani (Meydad kicks this one out with appropriate pathos); the Sefardi piyut-like Aufah Eshkona (can you NOT sing this when you hear it?!); and the eternally positive and very Mediterranean Al Tishaver. Even lesser songs, such as Ben Adam and Melech Malchei Hamelachim are well toned and just, well, energetic. Look, it’s a fun album. He’s a fun artist.

This album, Tasa’s most recent, has some awesomeness, and some less. The album DOES have 11 songs, so even if you agree with me and disagree with the subject matters of those three (their tunes aren’t bad), you still have a solid, well stocked record. But even more than that – there are three songs here that are themselves worth the price of admission.

Starting with the meh, just to get that out of the way: 1. Another “Ima” song?! For heaven’s sake, that’s his THIRD! At least give your Poppa some respect! 2. HaRav Elbaz Lo Mevater: No disrespect, yo, and while I appreciate the sentiments expressed, a bit of “fanboy” overkill here. 3. Ditto on “Osim Teshuva” – this ain’t a sports team, and this song sounds way too much like a “rah-rah” tune on a very serious subject.

Ok – now for real’s. Track #1, Chachama Umushlemet, is awesome. The song bleeds emotion; the lyrics dazzle; and Tasa belts it. The entrée is delicious, the pleading chorus is stunning, the interlude at 2:40 forces me to up the volume every time, the pacing is so elegant and the ending just the way it should be. You may be able to tell – I love this song. In my book, perfect pop production.

Kama Od Efshar, in which producer Aviad Gil takes the mike alongside Tasa, is another similarly well packaged piece – the delicate piano off chords that begin, as the very poetic and prayerful lyrics amid the light percussion frame Gil nicely. And Meydad takes it over with his lilting voice bringing out the feeling with his unique ability. And the back and forth between the two towards the end of the piece is balanced and tight.

And a third song: Lamoledet Shuvi Roni, a Sefardi crooner with an Andalusian style arrangement that Tasa picks up with ease and skill. Strings, plucking guitar and blazing sax combine with the snappy percussion and Meydad’s complete stylistic comfort and vocal nuances to pull you back to a sun-baked desert for a few moments.

Those three are, as previously stated, awesome. As for the rest of the album, Na Elokim is another good song – an action-packed thriller. And the rest is standard but enjoyable. Yet another fun, well-rounded collection from this talented young guy.

Now, just one thing: If anyone out there can please suggest to Meydad’s producer to go with an original album cover? Enough with the mug shots…