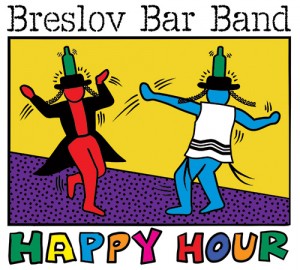 It is almost three months since Breslov Bar Band released their album Happy Hour. When it was released I posted a recommendation on JMR without listening to the whole album, but I was confident by listening to the previews that it was an album worth investing in and recommending. It’s been a busy time in my life since then (if you know me then you know why) but I made sure to listen to this album over and over again. It lived up to my expectations and is a really enjoyable album to listen to. The songs, some which I knew already and some which I now know are not new songs, but they are performed by BBB in a tasteful yet modern way. All the songs are somehow associated to Breslov Chassidus, whether actual Breslover niggunim or other popular Chassidic nigunim that have become famous by Miron or Uman festivities. As I give my song by song assessment I will relate the song’s association as noted in the albums extended liner notes. In my opinion, Binyomin Ginzburg has put out a very enjoyable album both musically and vocally. As is noted in the liner notes, “The group explores these songs using the band members’ diverse musical influences, blending Chassidic/Klezmer music with Middle-Eastern, Rock, Reggae, Punk, Ska, and other musical styles in an organic manner.”

Abbo’s Courtyard – This is an old traditional debka that I grew up hearing at weddings as one of the earliest horas.  It is an instrumental track that modernizes a very old traditional tune, yet doesn’t lose the traditional feel.  As the liner notes state, “It has become traditional for the musicians play this tune at the start of the Lag BaOmer festivities in Tzfat. The song is also often played at Chassidic weddings.”

Oy Gevalt, Mir Shluft! – This song, which I had never heard before, has a bit of a disco/oompah feel to it and features Binyomin’s vocals. Add in some funky horn and guitar arrangements and this is one groovy tune. The liner notes explain the connection to Breslov as follows: “The melody was sung by Chassidim in Uman as far back as the beginning of the 19th century, and the lyrics were added in Israel in the 1930s. The lyrics are appropriate to sing as Shabbos comes to a close, reminding that there is much to accomplish in the coming week!”

Chadesh Sossoni – When I read the liner notes avout this song originally being performed by Diaspora Yeshiva Band I was really excited because I grew up listening to their famous concert that recently came out on DVD. Listening to this Ska and Debka arranged song; it is not a song that I recognize, but one that I have come to really enjoy. It features a baritone saxophone solo by Zach Mayer. The liner notes add a little history to this song: “The song is a popular dance melody setting of one of the songs written for Melave Malka, the traditional post-Shabbos meal bidding farewell to the Shabbos Queen. The words speak of Eliyahu HaNavi (the prophet Elijah) and the return of the Jewish people to the land of Israel.”

Asur Lehityaesh – Finally a song with Rebbi Nachman MiBreslov mentioned (ok I am joking about the “finally” but at least we know the origins of this song are definitely Breslov). This song features Binyomin both as a vocalist and as an expert musician on a bass melodion and also a Rhodes electric piano through a Mutron envelope filter (don’t ask me what that means but it sounded cool so I had to add it to my review).  The actual origins of the song are mentioned in the liner notes: “The lyrics are a Hebrew translation and embellishment of Rabbi Nachman’s Yiddish statement “Gevalt! It is forbidden to give up hope.” (Likutei Moharan II, 78) These words were allegedly sung – I imagine to a different melody – by Breslov Chasidim in the ghettoes and concentration camps during World War II.”

Keyl Adon – This is a delightful and upbeat song that also features Binyomin’s vocals to the words of Keyl Adon. This is a song that I can imagine being sung at shuls on Shabbos morning.  While the origin of the song is not mentioned on the liner notes, Binyomin does give a shout out to Breslover clarinetist Chilik Frank who also performs this song on his own album.

Tayere Brider – this is definitely a Breslover song and mentioned as well in the liner notes: “When the Breslov Chassidim would take leave of one another at the close of the annual Rosh Hashana gathering at Rabbi Nachman’s grave in Uman, they would sing this song in Yiddish: “Dear brothers, beloved brothers, when will we see each other again? If God will give us health and life, we will see each other again!” Ths song changes keys each time around and my take on this is that is probably how the Breslov Chassidim sing it (not on purpose of course) when they are singing together (and yes this is a joke…)

Shimru Shabsosai (Old School Version) – This is the 1st of two versions of the same song on this album. This is the “old school” version and features flautist Adrianne Greenbaum and tsimblist Pete Rushefsky. This is a very melodious song and I really enjoy it in its relaxed and slow arrangement.  The origin of this song according to the liner notes is as follows: “This Breslov melody for the Shabbos song “Shimru Shabsosai” is perhaps better known as a melody many use for “Yom Shabbason,” a different Shabbos zemer (song). Breslov Chassidim say it is of Polish origin.”

Shimru Shabsosai (Skipping School Version) – This is a much quicker version of the previous song. I personally enjoyed the song slower but I got a kick out this version as well. Having them follow each other makes them seem as one song and I can understand the song starting slow and speeding up.

Yechadshehu – This is a haunting and beautiful song that according to the liner notes: “is a beautiful Breslov melody for Birkas HaChodesh(Blessing the New Month), sung on Shabbos Mevarchim, the Shabbos preceding Rosh Chodesh (the new month).” This is my favorite song on the album.

Nitzachti Va’anatzeach – This is another slow and beautiful song. The liner notes say it perfectly: “This pretty tune, a relatively recent composition by Yisrael Dagan, compiles many of Rabbi Nachman’s statements about himself, taken from different places in Chayei Moharan, into one song. “Nitzachti va’anatzeach –I have been victorious and I will be victorious,” were Rabbi Nachman’s final words.”

Lag BaOmer Jam – I think the best way to describe this is that it’s a Lag BaOmer Jam! Two popular songs and a group of awesome musicians make this very enjoyable and fun to listen to! As the liner notes tell us: “The band plays around with some freylakhs associated with Lag BaOmer. The first song is “Vaharikosi Lachem Bracha” and mentions Rabbi Shimon Bar Yochai. The second tune is popularly known as the “Lag BaOmer Nigun.” Yoshi breaks out the fuzz pedal for a heavy distorted bass solo on this track, and Zach Mayer ends the tune with a baritone saxophone cadenza.”

Yom Shabboson – This is another very enjoyable slow song. The song has a very traditional sound but the funky guitar solos really give it a more contemporary sound. I also found in the liner notes a good reason why I am not finishing writing this review until now. It has origins in last week’s parsha hashavua! “According to tradition, the dove that Noach sent forth from the ark, to see if the floodwaters had receded, found rest on Shabbos – and so do we. The text of this song was written by the famous poet and philosopher Rabbi Yehuda HaLevi (1075-1140).”

A Gute Vokh – This is a light and fun themed waltz, which I find is a great way to finish off the album. Reading the liner notes it seems they had a real good time recording this and I had an equally good time listening to it!

All in all this is a very solid and enjoyable album for those music lovers who don’t necessarily need to have the latest sounds and songs to listen to. Even the songs that I knew beforehand have additions to them and I am still listening to it and will be for a while to come.

You can listen to the preview: http://snd.sc/151KANM

For more about the album and for extended liner notes check out their website: http://breslovbarband.tumblr.com/

“Happy Hour” is now available at iTunes, Amazon.com, and CD Baby all at a very affordable price!