9@9 on Nachum Segal with Yossi Zweig 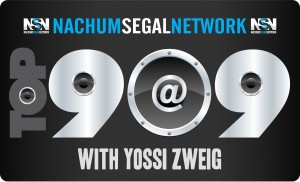 With the Nachum Segal Network starting its second season, a slew of new programming has been added to the thrill of Jewish world wide.

One of the new programs is the NSN Top 9@9. With so many albums/singles being released, how does know what the hottest song is? That’s why theNachum Segal Network has launched a brand new show starting next Tuesday evening titled the TOP 9@9 hosted by the Z report’s Yossi Zweig. Each week on Tuesday night @9 the show we will count down the 9 hottest songs as voted by YOU the listeners. How do you vote, one might ask? Simple, just visit http://www.nachumsegal.com/9at9/ and vote in the 9@9 poll. The poll has been loaded with 18 of the hottest songs right now as sent in by our listeners. The poll allows voting from each ip address (computer) only ONCE to ensure that there that all voting is legit. You can also like/comment on the NSN Top 9@9 Facebook page https://www.facebook.com/pages/NSN-Top-9-at-9/180330235489637 and let us know what you think of the show and which songs you might want to see featured. The poll will close Tuesdays 7pm and re-open Wednesday mornings for the following week.