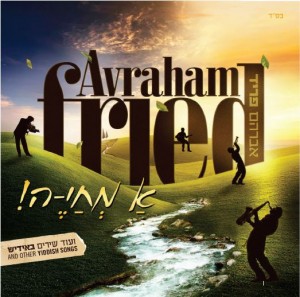 There had been a bit of a clamor of voices asking Avremel to return to a Yiddish album. After all, his Yiddish Gem series, along with his many random Yiddish songs scattered across his discography, have an energy that is all their own. Much of that can be chalked up to the linguistic genius of R’ Yom Tov Ehrlich, but a lot of it can also be chalked up to Avremel’s own natural – and obvious – love of the language. Yiddish is unique; it’s colorful and expressive, with a flair for the dramatic. As a pseudo-linguist myself, and as someone who dabbles in other languages, I find that it emphasizes things in a subtle way that other languages cannot.

So here we are – Ah Mechaye! And when you think of Yiddish music, a few things come to mind: Klezmer, Chassidisher niggunim, Yiddish theatre, lullabies, and the more recent, Lipa-style Yiddish work. It seems that Avremel collected a bit of all the above on this album, keeping a gentle balance of the new and the old while injecting that Yiddish fire und flamm.

The primary focus of the album is, without question, on the lyrics and vocals. The arrangement overall has a fairly modern sound with a clearly old-time undercurrent. Each song flows easily into the next, and you’ll find yourself reflecting on the messages often. Well, at least, if you speak Yiddish. If you don’t, no worries – the album liner notes translate everything for you, with the addition of some friendly comments from the singer himself.

Onto this delightful album:

Arois: (***) Starting off with an old folkie sound, acoustic guitar and accordion leading the way. The tune and lyrics are fairly standard, but as always, Avremel’s energetic inflections give it that additional element. The faux-end at 3:54 slides into a cool ending for the song.

A Freilichen Tisha B’Av: (***) Great concept and original lyrics, pulled together by a well-known figure, but new to the Jewish pop scene – Rabbi Dr. A. J. Twerski. What makes this song particularly enjoyable is the unique combination of Hilchos Tisha B’Av and midrashim on Moshiach. The tune, again, is standard; typical Jewish pop arrangement. It also could have used a bit more of an original ending, rather than the simple fade-out.

Ich Bin Ich: (*****) If you were getting worried, fear not – this album has some real treasures! And here’s one. I’ve kvetched about Avremel’s song intros before, but this one is just perfect! A brilliant comment by the Kotzker becomes a mind-bending (and stuck-in-your-head catchy) swing ditty. Great work on the horns and percussion lends great back-up to Fried’s ease with the mike. The song retains an element of the live feel, despite the studio overdubs. And hopefully, it’ll leave you with the echoing, probing question of, “Ver bist du?!” This song is the total package – vocals, arrangement, backups and band fit together just so.

Mein Tatten’s a Kind: (*****) With a page taken from the conversational niggunim (like R’ Levi Yitzchak Berditchever’s Kaddish), Avremel launches into a one-sided diatribe against his Yetzer Hara. Yes, it’s awesome. Even got me wondering for a moment if it was an actual niggun – at least until I heard the ancient terms “fun di ershte class” and “vacation”. This may have been influenced by Shuly Rand’s Asuy M’Avanim Tovot, but here it’s far more practical and relatable. The opening piano has Yaron Gershovsky’s distinctive sound all over it, and Avremel rolls right into it perfectly, with a sincere and honest touch that couldn’t be better. What can I tell you? This one gets me thinking every time I hear it… At 4:17 and on, Avremel blows the YH away with a powerful cry (recalling the penultimate rhyme of Chad Gadya) on the higher reaches of the stratosphere, and then launches back into the truly uplifting chorus. This song is a real farbrengen – it’ll clear any clogged spiritual arteries.

Lomir: (****) A musty oldie gets a bit of a face-lift. This song reminds me of a summer I spent in the former Soviet Union, and of an older congregant who wouldn’t stop singing it… And here it reappears (ironically on the same album as the aforementioned Dr. Twerski), with a more modern framing – reverb on the electric guitar in particular. But the song really rocks out with its new bridge at 2:57, and the power horns at 3:20. Way to freshen up an ancient tune!

Ah Mechaye: (***) I’m torn on this one. On one hand, I love the concept (again): the entire premise is based on the double entendre of the term “Mechaye” with regards to G-d. But the tune is a whimsical, theatrical piece that doesn’t give any of the necessary gravitas of the idea – at least without Avremel’s cantoral moves towards the end (2:50 and onwards). The match having been made in any case without my dubious input, it’s still a very ear-pleasing song, with a very pretty arrangement and pitch-perfect choir. This is one of those songs that I find critique in the first time I listen to it, but the critiques eventually fall away.

Bentch: (****) It ain’t a modern album without a hora. And here’s another Maamar Chazal that gets good mention – especially coming from a Kohen. Some fun special effects are tossed in with the occasional voice distortion and backup vocals, as well as the funky intermission of sorts, in which Reb Avremel calls out that incomparable philanthropist, R’ Sami Rohr. Fun piece.

Meine Tefillin: (***) This one – with an orchestral arrangement that is straight out of Broadway – Lipa returns to his original claim to fame, that superb Yiddish poetic ability to bring to life a maaseh’leh. With the orchestra working on all cylinders, Avremel follows suit, particularly with his emotional cry echoing R’ Levi Yitzchak Berditchever’s.

Lebedik Lebedik: (*****) This song echoes in my memory from G-d knows where… But consider this simchadik oldie to be officially resurrected and played at weddings near you – what an awesome dance tune! Excellent production on this piece, with lots to listen to in the background should you be one of those who need to sink into the music. And Avremel’s playful singing at 3:18 is a stroke of brilliance. I only wish the violin solo was given to a true virtuoso – what could a musician of the caliber of Andy Statman have done with that?!

A Gutte Voch: (***) Here’s another oldie that Fried is mechayeh. (Okay, now I’m guilty of that pun as well.) I honestly got a kick out of his well-placed comments in the intro. This piece is nostalgia at its best – gentle, soothing and picturesque. Issues? Well, the mandolin halfway through could have been lifted a bit higher in the mix. Besides that? None. Sweet stuff.

Zei A Gutter Yid: (**1/2) Yet another classic, a lullaby. Pretty, as could be expected, but it could have done with more authentic instrumentation and less keyboard. And mia apologia, but a bit of a cringe-inducing finale with a child’s stating “Ich vel zain a gitte Yid”… Nah, shvach execution.

Torah Di Beste Schoire: (****) This classic, however, follows perfectly in concept from the previous track. But this time, the children’s vocals are perfectly placed; Avremel’s vocals are powerful and urgent. Further into the song (2:48), his gentle teaching demeanor sounds authentic and hartzig. The child’s solo is both youthful and professional. The arrangement again wisely holds shtark with trombones and clarinet throughout, but holding to the electro-hum and gentle guitar strumming during your visit to cheder.

Oib Nisht Kein Emunah: (****) Another fun intro to this oldie. Anyone know where it’s originally from? Sounds Lubavitch – but offhand, I know of no such source. The intro piano departs a bit from the olde-tyme of the horns, which really set the mood for the whole piece, but not too distracting. And again, Fried exhibits a variety of vocal shtick as he works through the whole Alef-Beis of the song. Another fantastic song, with fantastic production. And more considerate rhymes to propel you onwards.

This is a heartwarming and thought-provoking album – a truly worthy successor to Yiddish Gems. It has a sound that is both familiar and new, and exhibits no truly weak links. It hits all the notes you’d expect it to, along with some definitely impressive surprises: for me, at least, the background vocals and random comments are superb and lots of fun. They add color and character to what might have been otherwise just cliche. If you don’t speak Yiddish, you’ll be missing much of the fun, but you’ll have plenty to enjoy despite that. Mad props – err, a groysen, hartziken Yashar Koach – to Avremi G. on the arrangements: I really feel he did an excellent job balancing and updating the old klezmer sound. In my humble opinion, this album will find fans of both tastes, and that was not a simple task to tackle. And of course, Avraham Fried: over the past few albums in particular, he’s revealed himself to be not just a sensational singer, but a talented composer with a sensitive soul.  Tachlis: Another great album from today’s reigning king of Jewish music. It may be cliche, but this album is ah … nah, I won’t say it. That’s YOUR job!