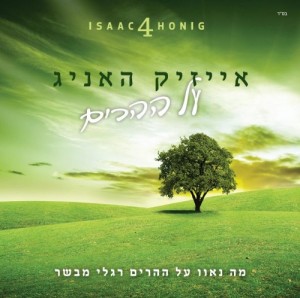 The long wait is finally over! It’s been years since Isaac Honig has last released an album, but that’s of course until recently. This exciting new CD has been worked on for many years by Isaac Honig who himself produced the album.

So what kind of album is it? Is this the typical Chassidishe singer putting out an album? Is it sung with the Chssidishe accent but really modern sounding? Is it a throwback to the Alter Heim? The answer is none of the above – but really an album that has all the ma’alos from all of the above.

I like to describe it as a production that has all the musical and technical requirements for 2013, and also has a tremendous Yiddishe taam that will please Yidden of all ages and all backgrounds.

For example, the first song is called “Besheifa Bruche” and it is a smashing leibedike hit that can be sung by both Chassidishe and Yeshivishe weddings.

There are some geshmake Pinky Weber compositions. One of them  – Atu Horeisu is a fantastic slow hartzige song with a beautiful child solo to give the song some extra oomph to it. It really became popular. Schools have used it for their events. It is a chassidishe song but the beginning sounds like Oidcho Hashem Eloikai – an old Yeshivishe song. Iverzoinchu is another one that is quite similar to Atu Horeisu. The third one  V’Yessoyi – from the Yomim Noiroim Musaf  – is different as it is a faster tempo waltz. It is accompanied by a children’s choir that enhances its flavor.

There are also 2 Yossi Green songs . It’s already a hit album without them, but having Yossi Green compositions is something special. Hapoireis is the first one and Heyai im Pifiyois is the second one and the last song on the album. Both are gorgeous stunning slow songs, but Heyai im Pifiyois is unique because they are words from a special tefilla from Yomim Noiroim. It is a special bakasha for the Ba’al Tefilla that hashem should help him be a good shliach for Klal Yisroel and accept his tefillos.

Issac Honig himself composed 2 songs – one is a fast song Hareini Mezamein and the other a slow, emotional Yiddish song called Kinderlach. He composed the lyrics as well so we can get an insight into his multi talents – singing , composing, composing lyrics. This is no small feat!

One of the final songs is a really intriguing compsition by Reb Hillel Paley called Ma Nuvi Al Hehurim. It is  slow and inspiring, but it has a beat to it also. Then after it is sung 2 times itseems like he’s starting a new song with a chazzonishe shtickel with the words “Kol Tzofayich”, but then it speeds up gradually until it goes quite fast then ends off with the music of the first part – Ma Novu.

All in all, this is a fantastic album. You will derive hours and hours of inspiration and enjoyment.