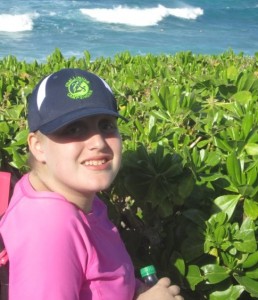 A New Jersey girl, herself a cancer patient, hopes to give something back to others stricken with the same disease, with an ambitious Bat Mitzvah project that she hopes will raise several thousand dollars for Chai Lifeline.

12 year old Anny Safier, a Fair Lawn resident and a seventh grader at the Rosenbaum Yeshiva of North Jersey, was born legally blind and was diagnosed with multiple brain tumors two years ago.  While according to doctors Anny’s prognosis is good, they were able to remove only one tumor in a surgical procedure last spring, leaving the remaining growths resting on her optic nerve, further impacting her already limited vision.  Despite spending most of sixth grade in and out of hospitals, doctor’s offices and treatment centers, Anny’s mother reports that she maintained an A average and still managed the highest mark in her honors math class final last June.

Anny’s parents are proud of her achievements both in and out of the classroom.

“Anny is a spiritual young lady who mostly looks for the good in people,” her mother, Robyn Safier, told VIN News.  “She celebrated her Bat Mitzvah this year and wanted to do a tzedaka project.”

Having divided her time in recent months between chemotherapy treatments, summers at Camp Simcha and other Chai Lifeline event’s, Anny elected to undertake a project that would benefit other children who were dealing with cancer.

“Anny is so grateful for the support she has received from Chai Lifeline that she embarked on a project entitled ‘Anny Sings for Chai Lifeline,'” reported Mrs. Safier.

The nine song album, recorded with the help of a family friend, features songs in both English and Hebrew, including an original composition by Anny as well as music by Shlomo Carlebach, Shalsheles, Yeshiva Boys Choir and Benny Friedman.

“Anny has an incredible voice and perfect pitch,” said Mrs. Safier.  “She also does harmonies on the CD and is the only voice heard on the album.”

Proceeds from the album, which is being sold for a suggested minimum donation of $10, will benefit Chai Lifeline.   Anny’s original goal had been just to raise $5,000 for Chai Lifeline, but in the aftermath of the fire that struck Camp Simcha just over a week ago, the pre-teen has set her sights on a specific target:  helping the camp rebuild the two buildings that were destroyed in the blaze.

Chai Lifeline officials expressed their gratitude and admiration to Anny for her efforts.

“We at Chai Lifeline are really honored to be the recipient’s of Anny’s talents and her chesed,” said Melanie Kwestel, director of communications at Chai Lifeline.  “Anny has always been an extraordinary child and she’s grown into an amazing young woman.  She has faced adversity and illness with grace, charm, maturity and a sense of humor that keeps her family, friends and community positive.”

In the one week since the release of Anny Sings For Chai Lifeline, almost 100 copies of the album have been sold and with several substantial donations received, the project has already brought in a profit of over $1,000.  Copies of the album are currently available online at annysingsforchailifeline@gmail.com, at the Rosenbaum Yeshiva of New Jersey in River Edge, The Frisch School and Yeshivat Noam, both located in Paramus.