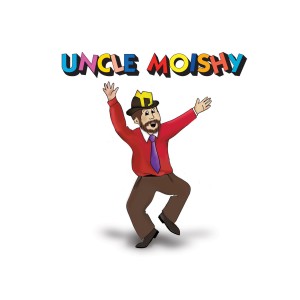 Sam and Rivka Tanenbaum, Holocaust survivors, knew some deeply dark times. Perhaps as compensation, Hashem gave them a son, Moishe, whose self-avowed goal is to bring “smiles, laugher, and lightheartedness, while perpetuating our precious Jewish values.”
He was gifted with a natural stage presence and ease with performing. “When I walk out onstage,” Moishe says, “I’m thinking about how we’re about to have a whole lot of fun.”

As a teenager in Toronto’s Eitz Chaim, Moishe Tanenbaum was involved in choirs and youth groups, honing his skills on the guitar. While not from a Lubavitcher family, he nevertheless used to volunteer with Chabad of Toronto, helping to do outreach with children and teens.

It was Chabad Shliach Rabbi Yehoshua Laufer who first suggested that since the Lubavitcher Rebbe had been encouraging Jews to use their Jewish names, the non-Jewish nickname he’d been known by should be replaced.

“You work with Jewish children, you have to set an example,” he said. Together they came up with the now-preeminent stage name Uncle Moishy.

“Uncle Moishy” originally performed mostly for teens, with friendsChaim Shainhouse on the keyboards and Zale Newman (still a longtime Toronto community activist and former national director of NCSY, who had at the time been a singer/songwriter on the 1970s-vintage Shema Kolenu albums) on the guitar.

They did small performances: kiruv Shabbatons and kumsitzes, with songs like “Shake It Up, Zaidy” (heimishe takeoffs on popular ’60s songs) and “Lubavitcher Twist.” Then the wife of Moishe’s rebbi (Rav Yaakov Gluckowsky z”l), who was a preschool teacher, asked him to come and play for her little talmidim.

“I wasn’t sure about performing for children that young,” Moishe says. “But I took my guitar and a cafeteria mike, and started off with ‘Torah Tzivah Lanu.’ They loved it! The teens started outgrowing the music, but the little children loved it, and I remained working at that level.”

By 1978, Moishe and his back-up friends felt ready to record an album — in those days, it was vinyl records or cassette tapes. Zale contacted David Golding (“Ding”), who had already produced several hit recordings together with master musician Suki Berry, including some wedding albums and some early Mordechai Ben David records. Ding told them, “Give me ten songs, and I’ll produce them for you.”

“We had the ten songs,” Moishe says. “We had ‘Hashem Is Here,’ ‘Torah Tzivah Lanu,’ ‘Ain’t Gonna Work on Saturday,’ ‘Don’t Walk in Front of Me,’ ‘Give a Little Tzedakah,’ and a few more. Suki, a master musician, put his signature talents into it, adding keyboards and sound effects.” The album was released in 1979, and to everyone’s surprise, it just took off. “We knew we had something to offer Jewish children,” Moishe recalls. “But who knew it would be that popular?”

While Moishe doesn’t write his own songs — “that’s a separate talent” — he has definite opinions about how children’s songs should sound; in fact, he’s not happy with the way he sees them changing. “The new songs are too wordy,” he says. “I like very simple words, sung in a nongarbled way.”

He even thinks it’s better to have adults singing on recordings than children, as soft, clear adult voices tend to be easier to understand. Have his audiences changed over the years? “Little kids are little kids,” he says. “They’re too young to be affected yet by the larger culture.”

The first Uncle Moishy concert in New York took place in a public school on 20th Avenue in 1982, and since then he’s been a staple of children’s events. “New York children are a bit more skeptical,” he comments. “They’re exposed to more entertainment. Out-of-town children seem to be less jaded. I find they’re better listeners, more responsive.”

Suki and Ding also produced the first Uncle Moishy videocassettes, although they waited a long time to get the all-clear signal from the community and obtained rabbinical permission to proceed.

“They didn’t want Uncle Moishy to be the first Jewish entertainer on video, because if there were any objections it could endanger the brand,” he says. “I myself wanted very much to make them — not for the children in New York, but for all those Jewish children in out-of-town places who had so little access to Jewish entertainment. Why should they watch non-Jewish videos?”

It’s concern for the out-of-town children that keeps him on the road many weeks out of the year, not only performing concerts but making hospital visitations for Make-A-Wish Foundation, Chai Lifeline, Mekimi, Bein Ish U’Bein Uchiv, and others. “Some hospitals even have a 24-hour Uncle Moishy DVD channel,” he notes.

While many performers get burned out or are put out by the time they hit middle age, for Moshe Tanenbaum, whose “real” job is a professional school photographer, the pace has only increased as his fame has grown. And while he admits his touring schedule can be exhausting, he recognizes it as his unique contribution to the chinuch of young Jewish children. “I’d like to see even more people doing the kind of touring I do,” he says.

Often recognized in “real life,” Uncle Moishy has become experienced in instantly changing into character. When a child spots him, “I wink, I wave, and I call hello in Uncle Moishy fashion,” he says. But that’s also the biggest source of nachas for this child of survivors: that the second or even third generation of children is growing up loving Torah and mitzvos as sung by Uncle Moishy, and passing that warm nostalgia down to their own children.