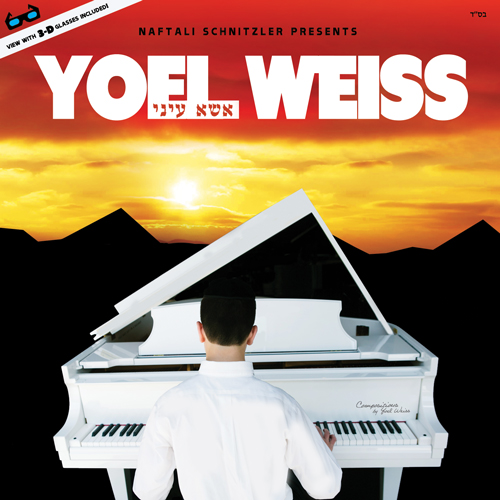 I haven’t really gotten around to to doing any reviews recently but I figured its been a while so here goes:

The Album I’m going to be reviewing today is “Esa Einai” by Yoel Weiss. To start, I had a long schmooze with Yoel about this album. We spoke over what I did (and didn’t) like and he was an absolute pleasure to speak with. Yoel explained to me how this album came about being that he is based in Los Angeles while producer Naftali Schnitzler is in New York. Yoel explained that when he started to look for a producer he looked for someone who he believed would do his compositions justice. It can be very rough for someone to take their own personal compositions and entrust them into the hands of someone else who may take them in a completely different direction than the composer may have originally imagined. In this case Yoel was extremely pleased with Naftali’s work. For those of you who haven’t heard this album yet you may have noticed it in stores as the only CD that comes prepackaged with 3D glasses. Designing Guru Sruly Meyer decided to do something very out of the box design-wise with this album. The images inside of the booklet were designed to jump out at you while wearing the 3D glasses.

Now that I’ve gotten all of that out we can begin:

1.Hodu: In a typical Jewish-Album fashion (not bashing here, just stating facts) the album starts off with a nice amount of brass. I do like this song, its a very catchy rock which you will find yourself singing long after you’ve finished listening to this album

2.Avinu – I like how this slow song is not “too” slow. It still has a rhythm to it and does not just drag on.

3.Mi Haish – This is actually one of my favorite songs on the album. I like that Naftali decided to start it with just drums and work its way into a fuller and fuller arrangement as the song makes its way to the chorus. I think it was very creative to add in the children’s choir in this song as well , I think it fits perfectly.

4.Brothers – Yoel writes in the album booklet that he composed this song for his brothers Bar Mitzvah. It seems that one of his relatives (or maybe a sister) worked on the lyrics. This is a very nice ballad about the advantages of having a close relationship with a brother. According to the booklet Yoel’s brother was involved in the background vocals on this song but I’m pretty confident I hear Shloimie Kaufman there so I’m not a hundred percent sure what the story is.

5.Retzono – I think that one of the best things in a song can be a great bass line. This one starts off with some nice slap bass and smoothly transitions into a Hora. I like the idea of having different style songs on an album but I am not always a fan of singers who attempt singing in a different “ha’avarah” then they were brought up with. I find that it can sound somewhat unnatural. Yoel stays true to his roots by not singing Sefardi on this song which I appreciate.

6.Yehi Ratzon – I think this is overall a nice song I don’t honestly have too much to say about it. One thing I will say is this, we see many times that someone will compose a song where the words do not fit the words at all (many of us composers are guilty of this). I think that this tune fits the words and concept very nicely.

7. Adon olam – I think this may have been one of the hits off the album. This song is one that I’ve heard on the Z report with Yossi Zweig, Nachum Segal, and it seems its been requested numerous times on The Jewish Music Stream.(www.JewishMusicStream.com for those of you not familiar)
I think this is a solid upbeat catchy song.

8. Vhaya – I love the way this track starts off with the classical guitar and graduates up to brass. Great transition between the two. Referring to what I wrote earlier in this review this song also has a great bass line.

9.Asher Bara – Although typically we hear these words typically sung within the realm of dancing music it looks like Yoel took a look at the serious side of these words when composing this song. I like that this song also has English words in it. I firmly believe that Jewish Music needs more songs with English lyrics since the current generation doesn’t understand what half the songs coming out are saying.

10. Esa Einei – Finally the title track of the album. While many singers will put the title track as number 3 or 4, Yoel keeps us hanging on until the 10th track. This song has a nice soft rhythmic feel to it. The song gets a tad bit heavier at the chorus but for the most part stays pretty laid back. Although it seems many people like to hear “rocked up” songs I like the idea of taking a song that could be potentially “rocked up” and relaxing with it a bit.

11.No Goodbye – This is the final track on the album. I think that this song is perfect to end off the album with. This is a nice strong Ballad with Lyrics by the same relative (or sister) from “Brothers” (Track 4). I think that this is a great song with a great message that even though past generations may be gone they still live on in the teachings they’ve given over during their lifetimes.I’m pretty sure I hear Shloimie Kaufman in this song as well doing background vocals but there is no information in the booklet which completely verifies this.
I think if you enjoy mainstream Jewish music you will enjoy this album although there are a few twists and turns musically where Naftali goes a bit out of the box with his arrangements (which I think are great).

Yoel is obviously a very good composer and considering he’s composing songs like these at his age I imagine we’ll be hearing a lot more songs with Yoel Weiss as the composer.

P.S. – If you are a singer/producer/band etc. looking for songs, feel free to get in touch with Yoel at Yoelwww@gmail.com-