SPLASHNEWS Review of The Chevra-“Chai” 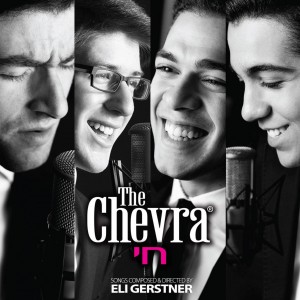 SPLASHNEWS-So “The Chevra” was an exciting part of history. Right? Wrong. Eli Gerstner and The Chevra are back with a brand new album! “Chai” is the culmination of a multi year project and includes 4 talented young men- Nati Chaboura,  Ely Shalom,  Elimelech Sperling, Azriel Zylberberg, and one very talented producer. Not to mention all the other many people that it takes to build an album. Many people have asked me over the past week, “How’s the new Chevra?”. My answer has been, “It’s the Chevra”. Meaning, if you like the Chevra, go get it! Eli somehow manages to take different guys with different voices every time and still keep that distinct “Chevra” sound. Amazing. This new album continues the tradition but raises the bar to 2013. Oh, by the way “The Chevra sound” is a package deal. It comes with hit music. Eli Gerstner, with his unshakable faith in the 4 chord theory (no, I won’t elaborate), continues to put out hit songs almost relentlessly. So you want to read what Ithink of songs? Here goes. By the way, all songs were composed and arranged by Eli Gerstner unless otherwise noted.

1. Chai-I’m a big fan of opening an album with a bang and here it is. This is an up-beat EDM style song arranged by DJ Itay Kalderon, that is sure to get you moving. A highlight for me is at 2:11 where we get our first listen from the “Israeli guy” who uses his distinct accent in various places throughout the album to give it an added zazz. A plus for this song is that it get’s refreshed 3 times with a 2 part interlude starting with English lyrics at 1:55 followed by said Israeli guy and then a bridge at 2:57. My criticism would be that if you remove these added parts, we are left with a fun song but a very repetitive sounding one. That said, I would lower my rating just a drop. Don’t yell and scream! This is myopinion! I have to criticize once in while to classify as a music critic:) 4 1/2 out of 5 stars

2. Uvichein-I like the guitar intro blended with distortion that leads into the drum beat. We get the harmony at 1:56 which continues through the song and actually reappears in a capella after the song ends. Interesting. At 2:18 we have a very mellow, acoustic, bridge which gives the song great contrast. I would have switched up the drum beat a little as the song goes on. Although the high got a little boring for me; all in all, it’s a good medium paced song. 3 out of 5 stars

3. Nachpisa-Very nice slow song that starts with a violin intro that reminds me of a YBC song. At first I wasn’t so into this song but I got into it as it really has a nice warm feel to it. I really like the second half of the song that starts off real soft at 3:09 but then picks up strength 3:38 before Israeli guy leads us into the high part. Also like when at 5:06 the beat breaks off and leaves us with just the violins and choir  before the drums kick back in for the ending. 3 1/2 out of 5 stars

4. I’m A Jew-Hold on to your seats for this one (oh no! goyish! :) ) Awesome beat. Awesome song. This is an English song with lyrics by the one and only Country Yossi. My take is that the lyrics are not as profound as the sound. (hey, maybe I can write lyrics) This is NOT a bad thing. I’ll explain- In my opinion, this song is not supposed to be a lyrical masterpiece; it is a song with fun and catchy lyrics that are easy to sing while still bringing out a good message. This combo gives us an outstanding song that is sure to be a hit. The song also reminds of the hit song “Cheery Bim” by 8th Day. Two simple but great highlights. First at 2:13 where they add a clap by the words “clap your yadaim”. While this is a cute effect, it also gives breathes new life into the song.  Next, at 3:06 when they transpose before ending the song. Simple, but gives an added kick to an already amazing song. Music arranged by Shai Barak together with Eli Gerstner. If you need an excuse to buy the album, it’s this song. By far my favorite song. 5 out of 5 stars

5. Kee Tov Zamrah-  Gorgeous ballad arranged by Yisroel Lamm starts off with guitars, piano and violin which leads into a flute solo. Child soloist Yitzy Waldman sings the song the first time around. I always like when child soloists are used in ballads because they usually lend  a certain purity to the song. The semi acapella high part at 3:45 is downright stunning. The choir in general has a very full sound in this song. I also like where they hold the note at 4:56 before the ending. 4 out of 5 stars

6. Kee Yitzpineini- No, thats not a typo. I was really surprised when different lyrics came out of my earbuds after the intro! This amazing slow song is really similar to Es Panecha from an earlier Chevra album (Track 6, Chevra 2) which is by the way one of my favorite songs. (Did I mention that in a previous review?) This song features the aging YMG. Can someone be called “aged” as a teen? Who cares. Yes, this the same- “my little brother, Yaakov Mordechai Gerster everybody!” All joking aside, he really sounds great in this song. I love the high part especially where I thought it was gonna end by “zivchei siruah…” but continues for a few more seconds. This really gives a great twist to the song for those of you that get what I’m trying to say. I also like the super high octave harmony (yes, I noticed) that justs stops short of giving me a brain freeze. Oh, the Israeli guy makes his appearance. Find it yourself. To sum it up- put this song on repeat. 4 1/2 out of 5 stars

7. V’lirushalayim- Another nice slow song composed by Eli together with Dovid Nachman, formerly of the Chevra, who also sings on this song. This song is a little bit more intense than the last song though. It starts off nice and easy with piano and light acoustic guitars but picks up in the high with drums and electric guitar. For those camp guys looking for a nice alma mater tune, this might do it for you. My only  criticism would be that I don’t really the breaks in the high part. I would have kept it simple but I wasn’t asked. 4 out of 5 stars

8. Mee Kell Kamocha-This is a sefardi horah that reminds me of “Vaani” from Chevra 2. For some reason this song just didn’t hit the spot for me but I’m sure many people will disagree. Arranged by Eli Gerstner and Shai Barak. 2 1/2 out of 5 stars

9. Peace-A slow English song with a great message featuring Eli Gerstner. The high part in this song also reminds of another song and that is “Brother” by Yoel Weiss. Look it up; great song. Oh, I’m in the middle of reviewing another song. Sorry. Regarding “Peace”, this song speaks for itself. The highlight for me is the bridge at 2:28. I also like how they kept the arrangements fairly simple because sometimes people over-arrange songs which can take away from the melody. Arrangements and lyrics by Eli with Larry Gates and additional lyrics by Yossi Toiv (Country Yossi).3 1/2 out of 5 stars

10. Ad Olam- This fast paced techno song features YBC and the amazing Benny Friedman. It was released as a music video before Pesach and delighted its many viewers (68,025 and counting). The truth is that it’s really a YBC song that features the Chevra but that’s okay. My highlight is actually Benny Friedman’s appearance after the key change. Am I allowed to write that? Seriously, the man is awesome. If you haven’t seen or heard this song yet, what are you waiting for? Arranged by Eli and Shai Barack. 8 out of 10 stars  –don’t scratch your head too hard

Summing it up, this is a great album and an awesome continuation of the tradition called “The Chevra”. I rate this album 4 out of 5 starswhich means GO GET IT! –Feel free to follow us on twitter @splashnewsusa