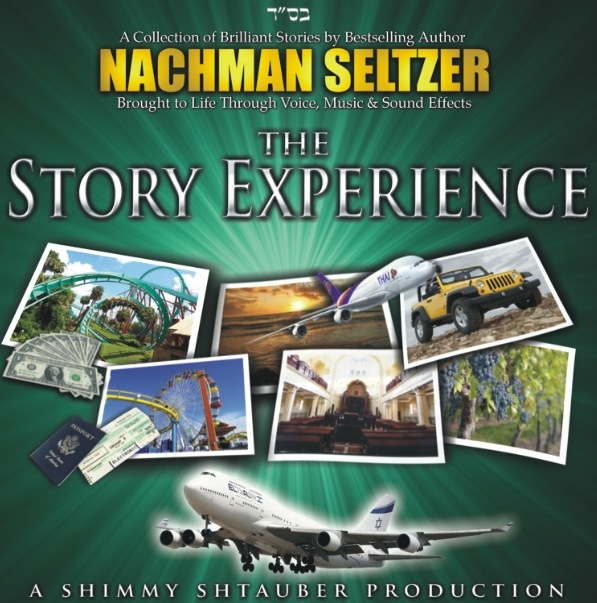 If you haven’t heard of Shimmy Shtauber yet, it’s about time you did. Shimmy is a shpitz entertainer and master impersonator – a world class impressionist and voice imitator. He specialty is imitating top Jewish singers. Now however, he brings us something else. For this project, he teamed up with the one and only Nachman Seltzer of Shira Chadasha Boy’s Choir fame.
This is a music site. So that’s why I mention “Shira Chadasha” fame. However, thousands know Nachman from his fabulous stories that appear in Hamodia Inyan magazine as well as his first-class novels and his “It Could Have Been You” series of books. He collects fascinating true stories and commits them to writing and produces masterpieces that you can’t put down. If you want to know the feeling of learning 8 hours beretzifus just pick up the book and you won’t be able to put it down for 8 hours!
Now what happens if our masmid needs to drive from New York to Toronto for example and can’t sit down to his favourite book? The answer is a “Link” between Nachman Seltzer and Shimmy Shtauber. The combination is as explosive as dynamite!
Shimmy decided to transform Nachman’s literary genius into audio.
But it’s not stam an audiobook. It’s a professional production of Nachman’s stories with such vivid details that you can mammesh feel as if you are living the stories. First you have Nachman himself showing that he is also a master narrator as he begins the stories with his narration that is very articulate and piques interest to listen to what’s going to happen next.

The music on the album is taken from his geshmake Shira Chadasha albums.

So even if you are dead tired as you swing on to the highway you won’t need caffeine to keep you going because these exciting and action-packed stories won’t let you get distracted for a minute. It is truly “A Story Experience”. Ath the end of each story, he finishes with an inspiring lesson you can take from it. (So then you are takeh learning beretzifus when you can grow spiritually from hearing the stories!)
I speak to you from personal experience. Driving on a Motzei Shabbos from New Jersey to Boro Park with my family, the little ones were restless and cranky. When I just turned on the The Story Experience”, in no time they were captivated and mesmerized by the amazing plot and passion from the stories, actors, music and sound effects.
The first story “Payback Time” is about 2 Bochurim in Lakewood, and when you hear the story and close your eyes, you are literally transported to Lakewood. Everything from the dorm matzav, to the Beis Midrash hock, to the hitch to Clifton Avenue! I don’t want to give away the story, but one scene takes place in the Torah Treasures seforim store, and if you imagine that you’re listening to the real owner talking behind the counter, that’s because you are! (In this case, it’s really him – not an imitation!) In fact, that entire scene was actually recorded live in the store! How’s that for a real sounding story!

Another story “The Road Trip” describes a family going to Eretz Yisroel for Sukkos and you hear all the sounds from the airport, flight, taxi, and the Yerushalayim Yom Tov atmosphere including shouts of an Arba Minim vendor shouting “Koishiklach finev Sheikel!” It feels sooo real!
Incidentally, that story has a guest star – my sixth grade Rebbi, R’ Shloime Moddel. Anyone who learned in Yesodei Hatorah in Toronto knows him as the most geshmake and talented Rebbi around. His storytelling and art was legendary. He used to act out stories and make us feel we were there. We were ultra-motivated to be good, because then we would get rewarded with a chapter of Marcus Lehmann’s “Reb Joselman from Rosheim.”

And so it is throughout the 75 minute album. The reality, sounds, voice acting and music is incredible. It is truly unlike any story album I’ve heard to date. It also features a variety of guest stars, including Kuppy Elbogen, Shlomo Hadarshan, Elchanan Schwartz, Nachman Seltzer, and of course, Shimmy Shtauber himself. (And many more.)

There is also an amazing tribute to the late Reb Shmuel Kunda a”h – a tremendous actor in his own right who inspired thousands of children worldwide. The tribute was written by Nachman Seltzer and features Shimmy Shtauber impersonating many of Rabbi Kunda’s famous characters.

Want some good laughs? There is a track full of some really geshmake bloopers that will keep you rolling for a long, long time.