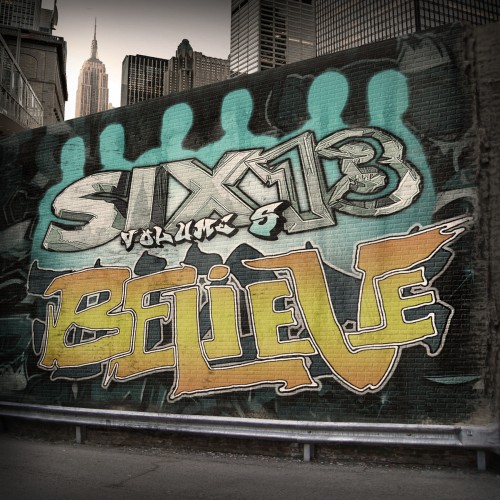 Find out more about Six13, and how you can pick up a copy of our new album, Vol. 5: BELIEVE, along with some cool extra stuff, perks and personal gifts!

Six Nice Jewish Boys take the stage, each equipped with only a microphone, a black blazer and the resolve to entertain. Images of choral singing / barbershop / doo-wop enter your brain; this is going to be boring, you think. Then, six mouths open — and it’s anything but.

Suddenly, you’re hearing full-fledged contemporary pop and soulful rock anthems with hard-hitting “drums”, deep bass and powerful lead vocals. You’re fully engaged, and you begin to notice: so is the entire crowd. This isn’t at all what I thought a cappella music was. This group is unlike anything you’ve ever seen or heard — and you can’t quite figure out how that sound is being generated by nothing more than six guys and their voices.

But you, and the rest of the audience, remain riveted long after that novelty wears off. The Jewish favorites you grew up with intermingle with clever parodies of today’s hits and catchy Six13 originals you’ll be humming on the drive home. Along the way, there are laughs, sing-alongs (both planned and unplanned), demonstrations, words of Torah and more — and by the end of the night, you feel like you’ve made six new friends.
For simchas, fundraisers and programs alike, there are few things as fun and truly nothing as unique as Six13. Hundreds of synagogues, JCCs, Hillels, yeshivot and Jewish organizations worldwide have invited Six13 to remind their communities just how fun, cool and beautiful it is to be Jewish.

Now, Six13 kicks their mission to connect Jews around the globe with their heritage through music into even higher gear with the release of their new album, BELIEVE. On this album, you can expect more of the quality Six13 has come to be known for — virtuosic singing, impeccable arrangements and tight harmonies, in-your-face thumping bass and vocal percussion, and infectiously danceable up-tempo tracks interspersed among heartfelt, moving ballads. But as always, the boys never settle for the “same old same old”. The songwriting takes a decidedly dramatic turn on this record, with soulful, ethereal cuts like “Shema” and “Mah Rabu” true to the central theme of “EMUNAH” that will leave the listener with goosebumps. On the other end of the spectrum are comedic gems, both in the form of hilarious originals like “Chanukah Rights” and the group’s trademark pop parodies, like “Good Shabbos” and “Brei Brei Brei”. This one’s got something for everyone.