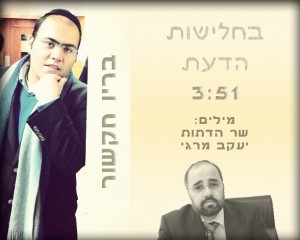 Officer Mergi said in an interview with Ariel Berman on the “Tachlis” program that he writes specifically when he is particularly emotional, both when he is angry/sad or excited/happy. When he is unable to express outwardly his emotions, he uses his poetic talent, in order to say his feelings.

Furthermore, the officer said that he has stored different writings of his in a drawer in his desk for a long time, and that he has close to 80 pieces of poetry/song lyrics.

The program “Tachlis” featuring Ariel Berman, which airs on Radio Kol chai live every day from 5-7 P.M., turned to Baryo Chakshur (who is known for his special abilities in composition), to compose a tune for the lyrics written by the Religion minister, Rav Yaakov Mergi.

The minister was very moved by the gesture and expressed that “Baryo connected to the words and composed a tune that is very fitting for them, just like a glove on a hand.”

Baryo, who is 23 years old, is currently in middle of Perek Ish Mekadeish, and is learning in Yeshivas Torah Vodaas in New York. While he is young, he has already managed in the past few years to release many hits in the Jewish music world, and is considered by many to be part of the new generation in Jewish Music. (Berachamim, Or Ha’Levana, Birshus, Naflah Ateret Rosheinu, Shehecheyanu, etc.)

Recently, he was even chosen to participate in the project of Shabbos songs put together by the Coca-Cola company in Israel, with 24 other singers from the Jewish Music international world. Now, he is currently working on his upcoming new album “Baryo 2”, and soon he plans to participate in a large concert in the “Heichal Ha’Tarbut” (Cultural Center), alongside Jewish Music professionals, both young and old.

The song wasn’t released as a single on the radio, rather it was a surprise for the Minister on Radio Kol Chai during the program of Ariel Berman.