The Stories of Rabbi Nachman Seltzer – A Shimmy Shtauber Production 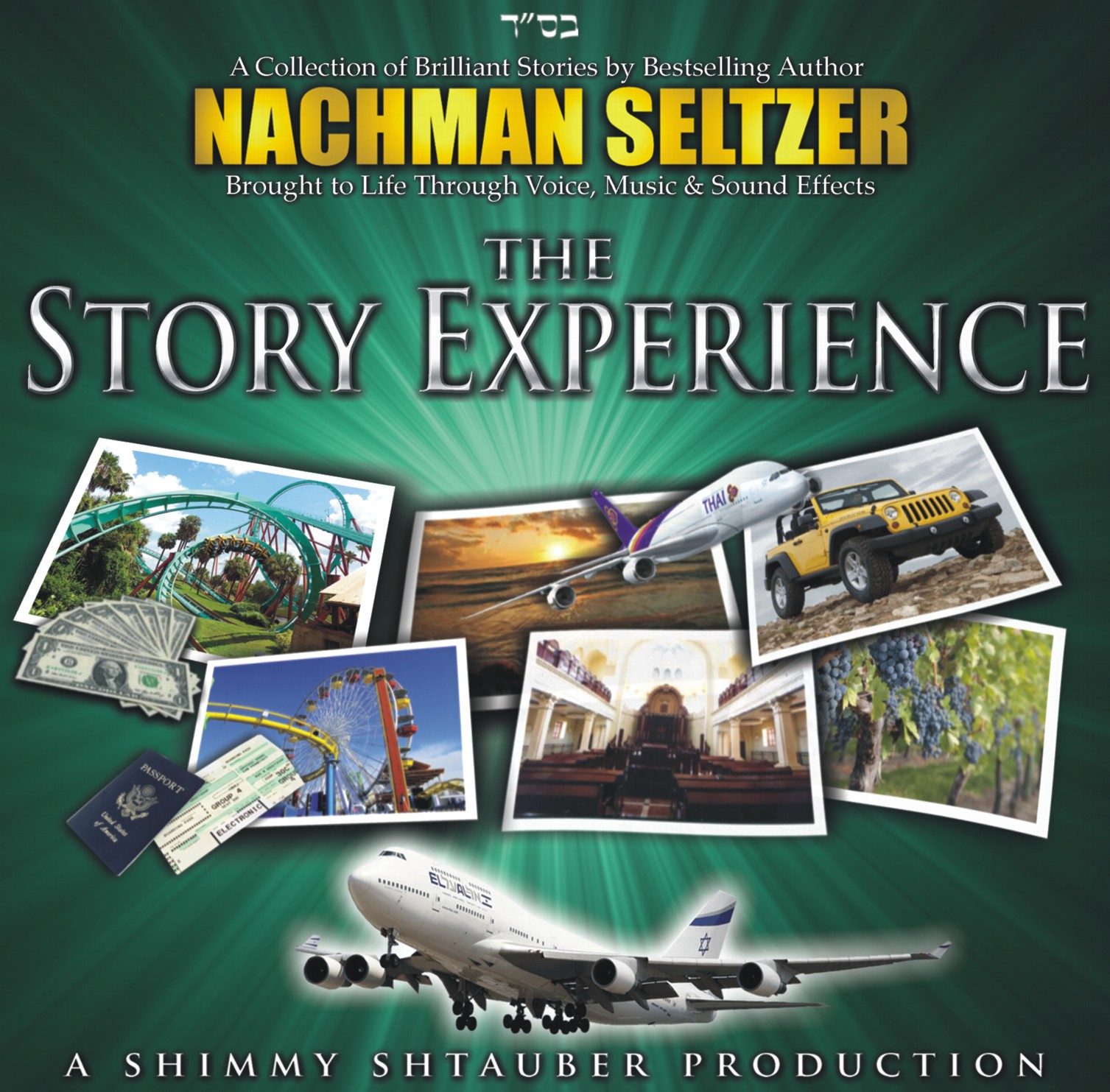 How I came to know “The Story Experience”

As an avid Jewish music fan, I try to keep my finger squarely on the pulse of  all the goings-on in the Jewish music industry. I buy almost every new CD that comes out, and I pride myself in that I can usually completely assess any CD instantly. I can tell you if the CD is going to “make it” or not, whether it doesn’t “deserve” to make it but it will, or (more commonly) if it deserves to make it but won’t. I’m also into Jewish story CDs, from the classics (Shmuel Kunda, The Marvelous Middos Machine, etc.) to the “wanna-be” classics, and everything in between. So, while on my bi-weekly trip to the music store, when I noticed a new story CD, it immediately caught my attention. “The Story Experience” – stories of Rabbi Nachman Seltzer, produced by Shimmy Shtauber. The name Shimmy Shtauber was vaguely familiar, but I couldn’t quite place it. I quickly bought the CD, popped it in to my car’s CD player while I perused the enclosed booklet. Even before the first story ended, I was already hooked! Allow me share my experience and my analysis. I’ll tell you each “nekuda” precisely how it struck me.

1. The Feeling of Reality

​The first thing that struck me was – can you guess? It was the feeling of reality! (Wow, how did you know?) Most story tapes, even the very best, don’t have the real life sound to them. Try putting on any story tape and closing your eyes – will you be transported to the scene of the story? (I wish I could give you some specific examples, but I don’t want to badmouth anyone.) But on this CD, the sound effects and voices really sound like they were recorded live, while the story was actually unfolding. (When a car honked on the CD, I naturally checked my mirrors and blind spots, and it took me a moment to realize that it wasn’t a real car, but just a sound effect.) And so it was throughout the album, the effects were so crisp and real, from a plane flying overhead, to the ring of a toaster oven.

When I later called up Shimmy (I was so impressed that I just had to find out the “behind the scenes” info of the production) he explained that making it sound real was harder than I thought. “I needed a Mexican, for example, but I couldn’t find someone who could imitate one perfectly, so I got a real Mexican.” He told me that that same was true for the geographic locations of the story. “For the scene that takes place in the seforim store, I actually went down to Torah Treasures in Lakewood and I asked the proprietor if he would do the recording. The sound effects there sound so real,  because they ARE real!”

2. The Diversity of the Cast

​The next “nekuda” to strike me was what I call the “colorfulness” of the CD. Many story CDs feature many characters that are performed by the same person. Most storytellers (with the notable exception of Rabbi Shmuel Kunda) sound like themselves no matter how much they try to change their voices. Sometimes, they do succeed in “kvetching-out” a second voice, but its still sounds remarkably bland listening to a story in which Yankel, Dovid, the Poretz, and the Rebbe all sound exactly the same. (FYI – this happens because most people, although they can change the connotations of their voice, all their voices are still on the same frequency, making them all sound somewhat the same, thus the story lacks “colorfulness”.) But this CD has such a diverse cast, it bursts with color, and is “fresh” from beginning to end. I counted thirteen actors in the first story alone (one of the “actors” are “the wonderful campers of camp Bracha V’hatzlacha in Lakewood” – which obviously leaves my tally undercounted). When I spoke to Shimmy about this, he  told me there were like 30 kids involved in the production. “During the whole period that I was working on the CD, I kept my ears open for anyone that I thought would fit any of the roles. For example, I knew a family friend who was a retired university professor from Germany. It dawned on me that this guy had the perfect voice to act the part of the president of a Reform Temple. I asked him if he’ll agree to try, and presto – I added another member to my cast.”

For the synagogue Yom Kippur scene, he enlisted The Aaron Miller Memorial Choir conducted by Shimmy Miller, the renowned cantorial choir that backs up Cantor Bentzion Miller every Shabbos Mevorchim in Young Israel Beth-El of Brooklyn.

3. The Actual Members of the Cast

​The next nekuda that struck me (strike three!) was who the actual cast was. Skimming the list, I counted at least eight familiar names. Not just plain names, but legends of Jewish entertainment: Kuppy Elbogen (the legendary actor with decades of experience in plays, tapes and films) Elchonon Schwartz (the world renowned Oorah’s Feivish, and a slew of characters on Marvelous Middos Machine 4), Shlomo Hadarshan (badchan & voice impressionist par excellence), Rabbi Shlomo Moddel (an old time favorite on Jewish story tapes, who acted the part of R’ Ahreleh Kalisher on The Golden Crown almost 25 years ago), Nachman Seltzer, (who narrates the stories) whom we all know as a talented writer, who proves himself to be an extremely talented orator as well, AND a selection of super-talented voices which Camp Karlin Stolin veterans and alumni will immediately recognize, the same folks who who gave Stolin the name as “the  camp with the rockiest staff in the mountains”.  And to top it off, Shimmy Shtauber himself, who raises the bar on vocal acting, has proven himself worthiest of all. He’s an impersonation master – he can a imitate a huge selection of voices perfectly. (Listen to the Shmuel Kunda Tribute at the end of the CD – and you’ll hear a small sampling of some of his impersonations.)

​The stories are graced with incredible background music that greatly enhances and perfectly bring out the emotions and twists of each story. When I asked Shimmy about the music, he replied, “Most of the music is from Nachman Seltzer’s beautiful compositions. There are clips of other music (like the intro to Baruch Levine’s Someone’s Child) that the producers graciously gave me permission to use. I also created some of the music myself, for example, I got a team of talented musicians together to recreate the old Yerushalmi tune that Abie Rotenberg used for his Sefer Torah song (on Journeys 1). I used it as the score for ‘The Grape Crush’, which is an emotional story about the journey of a Sefer Torah. The tune really matches the emotions of the story, and it brings it up to a whole new level.” And I couldn’t agree more!

​Yes, you heard right! This CD will not only keep your kids spellbound, but will keep you entertained also. Not like many CDs (I know that I’m continuously comparing, but it’s the best way to give an analysis) that parents can’t stand, and when you play it in the car, you have trouble staying awake at the wheel. This CD is enjoyable for the whole family, and has the type of emotions and humor that adults will appreciate. This point impressed me the most, because except for a rare few, most CDs are geared only for kids, much to the chagrin of us adults.

6. You Gotta Hear It to Believe it!

​There are many other notable aspects to the CD, the truly amazing stories themselves, the beautifully graphic cover spread, the full 75 minutes of running time, the blooper track, the incredibly affordable price etc., but I can’t possibly tell you everything, so I’ll just advise you to go down to your nearest music or Judaica store and pick up a copy. It’s a purchase that you won’t regret!