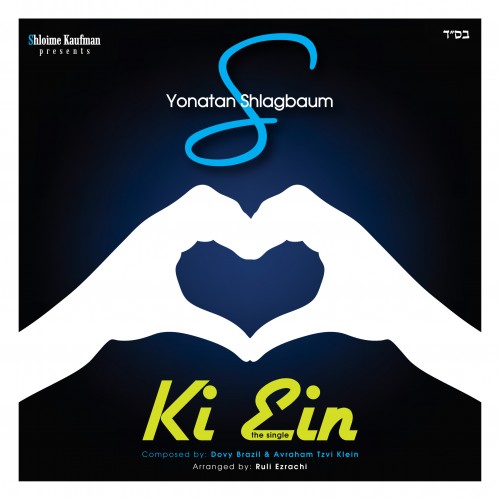 It is our pleasure to announce a brand new release. “Ki Ein”, by the winner of Oorah’s vocal competition Yonatan Shlagbaum, produced by Shloime Kaufman!!

Hailing from Toronto Canada, famed singer Yonatan Shlagbaum has been a driving force on the wedding circuit and bandstands since arriving in the US some six years ago. Yonatan’s musical career actually began when he became a bar mitzvah. A short while later, Yonatan formed his own accapella group in Toronto. At 19, after returning from learning in Eretz Yisroel, Yonatan began his professional career and entered the wedding scene in Toronto. Yonatan became an instant sensation! When he married, Yonatan moved to the US and settled in Teaneck, NJ. It did not take long before Yonatan exploded onto the simcha scene. You name the band and Shlagbaum has performed with them. Yonatan is one of the most requested singers, not only in the tri-state area, but in Miami, Chicago, Montreal, Los Angeles and Detroit, as well as his home town of Toronto. It is common for his audiences to call for an encore!

“Very often people call me and ask what a performer needs to be successful. I usually answer that first you need a voice. But even more than that, one needs to be a mentch, have stage presence and the ability to interact well with the crowd” says producer Shloime Kaufman. “Anyone who has seen or heard Yonatan can bear witness that he truly possesses all of these qualities. Yonatan always has a smile on his face and is very genuine on the bandstand”.

Over the last ten years, Shloime Kaufman has worn many hats: vocalist, composer, arranger, choir master band member, and more. Additionally, he has been involved behind the scenes in many facets of production since the onset of his career. More recently, Shloime assumed the role of producer. With both Shloime and Yonatan gaining more recognition, it was only a matter of time that these two talents joined forces, with results that will both astound and entertain you beyond your wildest expectations.

When choosing the song that will launch a solo musical career, one wants a song that will be popular as well as showcase their talents. Yonatan’s debut single “Ki Ein” does just that. The single was composed by two talented up and coming composers Dovi Brazil (son of the famed Reb Shmuel Brazil) and Avraham Tzvi Klein.

Shloime brought in veteran arranger Ruli Ezrachi to work his magic with the song. “Having him work with us on Yonatan’s music was an easy choice, he truly brings out the best in both the song and the singer. Ruli’s amazing talent is only matched by his professionalism and dedication”. Ruli has worked with the best of the best, from Fried to Lipa to Yeedle and more. “Yonatan was great to work with, he has a beautiful, rich voice that is a pleasure to listen to,” Ruli commented.

The track involved the work of some of the biggest names in the industry today, from Gal Gershovsky and Nachmen Dryer to the amazing brass directed by Danny Flam. Choir work was done by the widely popular Zemiros Choir lead by Yoily Polatseck. He says of Zemiros: “They were great to work with. They are a top notch group that works effectively and blends in with any track you throw their way.” Mixing and mastering the single was the legendary Larry Gates.

The anticipated single, a powerful song with a powerful message, will surely be a simcha hit!
The song is being made available as a FREE download on www.yonatanshlagbaum.com courtesy of the Shlagbaum team. May it enhance your simcha in Adar and may we continue to see ahavas yisroel.