New York – While shooting music videos has become a common way for singers to promote their latest albums, one well known performer has released a video that is unlike anything that has ever been done before in the Jewish music business.

Hot off the release of his new album Crown Heights resident Benny Friedman actually rejected the idea of an underwater video shoot the first time it was suggested by producer Moshe Bree late last summer during a photo shoot which included pictures of a fully dressed Friedman in a swimming pool, as well as a second time, just hours later, when Sruly Meyer, director of marketing at Aderet Music, saw some those same publicity shots and came up with the identical idea, even linking the concept of water to one of the songs on the album.

“I’m not really a water sports person and I’m definitely not at my most comfortable under water,” Friedman told VIN News.  “When we were actually filming it, I was thinking ‘Why can’t I just get a normal job like everyone else?’”

But after a phone call with video co-producer Sruly Meyer who pointed out that water and the song Maaleh Ani both shared a common thread of sanctification, Friedman decided to reconsider his earlier stance.

Maaleh Ani is the fourth track of Friedman’s second album, Yesh Tikva, produced by Avi Newmark and composed by Elimelech Blumstein.  With lyrics taken from the Sfas Emes’ commentary on the ninety second kapitel of Tehillim, the song addresses the concept of kedusha.

“The more I thought about it, the more the connection between the idea and the song clicked in my head and that was when I got really excited,” said Friedman. 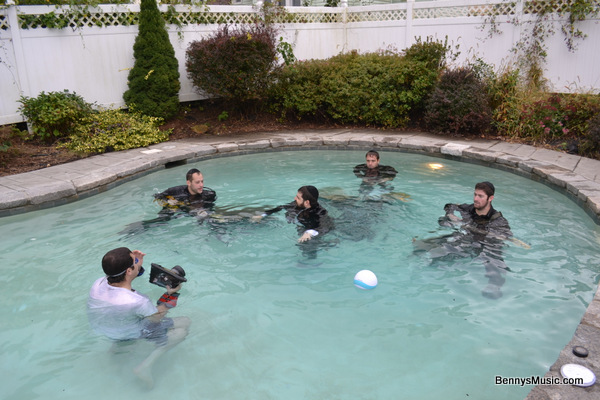 While the singer jetted off to Los Angeles for several weeks, even setting aside some time to shoot footage for the project, Bree got to work finessing the details of what was sure to be a complicated shoot.

“There were a number of technical details we needed to figure out,” explained Bree.  “How to play the music underwater.  How to keep everyone from floating up.  How to maximize the ten seconds or so we would have for each shot.  I did a couple of test shoots over the summer with some friends to solve these issues.”

“The pool was heated so things were okay while we were in the water,” reported Bree.  “The problem was stepping out, dripping wet, into the cold weather.” 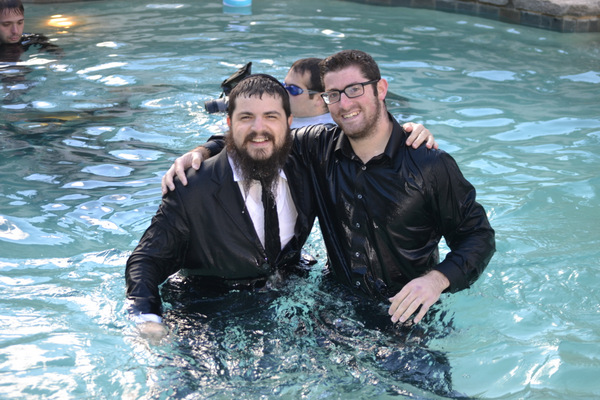 It was a crew of five who spent much of the day climbing in and out of the water, consisting of Friedman, Bree, who purchased an underwater camera housing for the video shoot, guitarist Aryeh Kunstler, bass guitarist Elimelech Sperling and drummer Yisroel Reches, with filming taking place in numerous ten second increments.  All five wore ankle weights to keep them at the bottom of the pool and were so thoroughly chilled by the time shooting wrapped it took hot showers at Bree’s house to warm them up.

“Baruch Hashem no one got sick,” said Bree. 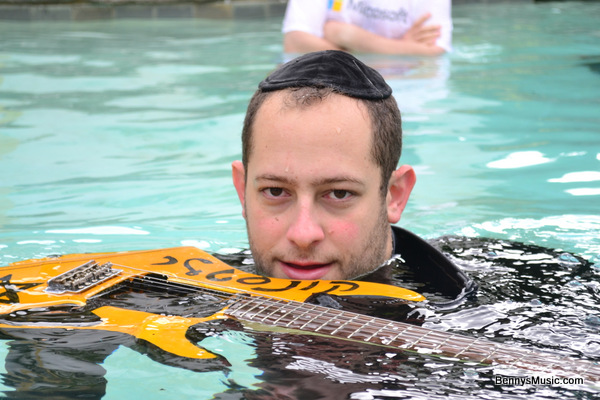 Keeping the instruments underwater was equally challenging.  Using the drumsticks to punch holes in the top of the drums, the drums were filled with water and weighted to keep them from floating, as were speakers that were placed in the pool.  Kunstler’s wooden guitar proved to be another problem.

“It was solid wood and it wouldn’t sink or stay underwater,” said Meyer.  “We literally had to drill holes into it so that it wouldn’t float.”

With Maaleh Ani piped into the pool through an underwater bluetooth wireless speaker, all three musicians were actually able to play the song underwater.  While clearly Friedman was unable to actually sing in the pool, the singer, in his full dress attire of black suit, tie and cufflinks, is seen playing drums and air guitar, clapping and swimming around near the band members.  The only footage of Friedman singing underwater is displayed on a television set sunk into the bottom of the pool.

With the exception of Kunstler’s guitar, an old model that he no longer used, the other instruments, including a pair of giant speakers, were all purchased at a yard sale at a total cost of less than fifty dollars.  All were damaged beyond repair but Meyer was quick to add that the instruments were in poor condition before the filming even began.

“The drums were in miserable condition and the bass guitar was already busted, so for those are concerned, those instruments had been ruined far before we ever threw them into the water,” said Meyer.

The television set used in the video was a find that Bree came across one day on his way to Mincha.

“I had had the idea to composite some of the footage of Benny singing in California on a television set underwater,” said Bree.  “I quickly ran home, grabbed my car, picked up the TV and brought it home.”

Changing into his bathing suit, Bree tossed the television into his pool. 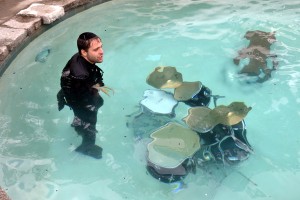 “This was about two weeks after the main shoot so the weather was even colder and I didn’t have a chance to heat up the pool,” recalled Bree.  “It was freezing.  I couldn’t get the TV to sink, even with putting twenty pounds of weights inside.  I ended up taking apart the TV, filming just the shell in the water and then digitally compositing the footage of Benny in Los Angeles onto the TV.”

Despite his initial resistance to the concept, the 28 year old Friedman is pleased with the results of the very atypical, not to mention soggy, shoot.

“The main objective with this kind of thing is to create a product that is first and foremost very entertaining, because that’s our job,” said Friedman.  “We are not rabbis or rosh yeshivas or anything like that, we are entertainers.  Our the goal is to create something that is entertaining, but at the same time keeps the spirit, the warmth, and the style of good, old fashioned Judaism and I think that this video does both of those things pretty well, thank G-d.”