JMR Staff: Our Picks for Songs of the Year 2012 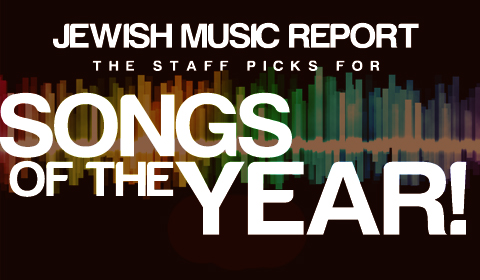 As we start to tick off the days of January and 2012 becomes but a receding point in the rear view mirror, we here at JMR did what we do best –  contemplating the music that came our way in the past calendar year.  Despite the geographic limitations that exist amongst our staff, the conversation ended up being a very long and tangled email thread as everyone shared their thoughts on what songs were solid enough to be considered the best music of 2012.

Read on for our picks and feel free to share your faves (only positive thoughts, no bashing anyone else’s selections please) in the comments!

Light – Avraham Fried:  A strong, positive message sung by one of the best. love the informal style of going back and forth from Hebrew to English and throwing in some Yiddish.

Mesikus Hatorah – Yisroel Werdyger:  Just the words alone jump out as outstanding, describing the treasure we have – The Torah.  The song is inspiring and is sung beautifully.

Kol Zman – Mendy Werzberger:  Sung by Mendy and Yitzy Waldner who composed it, it can be listened to over and over.  Yitzy sings unbelievably and should have his own album and Mendy sings nicely as well.

Yesimcho – Yaakov Shwekey:  a beautiful and touching song that really encapsulates the theme of the words. Yaakov’s son, Menachem, adds his vocal talents to the song as well.

Ki Malachov – Shauly Waldner: an amazing and hartzige song.  This is one that I have visions of singing at weddings for many years to come.

Toda L’Cha – Mendy Werzberger: a fun song that has you dancing when you hear it.

V’chol Mi – Yehuda Green:  the words hit home and the niggun is perfect for a kumzitz.

Kach Es Sheli – Avraham Fried: A real pumping leibidic song that gets put on repeat over and over.

Lo Yaavod – Yaakov Shwekey – Video of the year, in my opinion.

Yesh Tikva – Benny Friedman:  The whole world seems to have loved it.

B’sheim Hashem – Benny Friedman:  also gets my vote.  Even though it was originally produced over a year ago, having it come out on a new album makes it eligible in my book.

Hofachta – Avraham Fried:  The whole world seems to have bought into it.

Keep Climbing by Avraham Fried is the album of the year without question.

Entire Friedman Family – including 8th Day and Benny Friedman – all on top of things.

A good half of Yesh Tikva – Benny Friedman:  No, not the song, the album. Yes, there are that many songs there that I could consider song of the year. Stay tuned, review is coming one of these days.

Didan – 8th Day:  Totally fun, totally addictive, I could, and do, listen to this one over and over again.  If anyone has the sheet music for this one, please let me know!

-My favorite song of the year is Oy Na Lanu which is the first track on Meydad Tasa’s Atah Hamelech album. It is an emotional song and Meydad sings it with a lot of feeling and hartzigkeit. I rated it 5 Stars in my review of the album (my first post on JMR) and I still stand by that.
-I would agree that Hofachta by Fried is a top 5 song as well. I’ve heard it by many a chasunah and it is always rocking. At a Fried concert this songtook down the house (as did Beri Weber’s Chabad niggun but that’s end of 2011).
-Oh by the way–Has anyone heard Yesh Tikvah from Benny Friedman?! Just asking.
Niggun Guy
This is not my best overall music of 2012, it’s my Top 5 Chassidic Jewish music songs. I did not include any songs from Chaim Yisrael, Aaron & Yonatan Razel, all of which have amazing new albums.
From the sampler to the dance floor, this song was #1 on everyone’s list including mine.
1) Avraham Fried’s Hofachta, from the album, Keep Climbing, composed by Yitzy Waldner
People were hungry for something like this from Benny, and boy did he deliver a full course meal, starting with dessert! Any questions?
2) Benny Friedman’s Yesh Tikvah, from the album, Yesh Tikvah, composed by Ari Goldwag
I would say Zaroh is a song that only comes once ina  while from a composer, by Pinky has been dishing out hits the last year almost non stop! What a song!
3) Yisroel Werdyger’s Zaroh, from the album Oideh Lokeil. Composed by Pinky Weber.
Some of you might have expected Haposeach? Maybe Chayim? No. If I were Lipa I would not have let this one go!
4) Shloime Gertner’s Riboin, from the album Vehiskin. Composed by Lipa Schmeltzer.
I was gonna go with Shwekey’s Lo Yaavod, which in any other year would probably be in the top 3,  Shauly gets this pick because not only is he a new artist, but a new artist who delivered a very good album! (Check out KI Malachav for the Waldner Bros duet masterpiece!) This pick however goes to Avinu, yet another hit from Pinky Weber.
5) Shauly Waldner’s Avinu, from the album Tov Hashem, composed by Pinky Weber