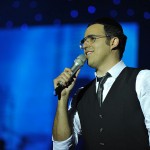 One of Jewish music’s brightest stars took to the stage this past Tuesday in an effort to express his gratitude to Israeli soldiers in a record breaking concert held at Tel Aviv’s Nokia Arena.

Over 8,000 people were in attendance for an evening of music with Yaakov Shwekey, among them 2,000 invited guests, all members of Tzahal.

“As a singer, what can you possibly do to thank the soldiers who put their lives on the line every day?”  asked Shwekey in an interview with VIN News.

“It was such a privilege to be able to use the gift of music to bring people together for something like this. Publicly thanking Israeli soldiers is something I have wanted to do for a long time and with the recent rocket attacks we decided it was time to make the idea become a reality.  I have seen European newspapers and the way they write everything about Israel is so twisted.  They portray our army in a very negative light and I felt we owe it to our soldiers to express our gratitude and show them how much Jews of all types, from all over the world, appreciate them.”

It took over two days to build the set for the massive concert, entitled Shir Lachayalim, which featured an unprecedented160 musicians of all ages.

“They didn’t have enough music stand lights in Israel for all the musicians,” reported Shwekey.  “They had to ship more in from China to make sure we had enough.”

In addition to performing many of his well known hits, Shwekey also sang two new songs that were written for the evening, one a hora called Lo Yisa Goy and the other entitled Misheberach, with lyrics from the weekly tefila said in many locations on behalf of the Israeli army.

“The mood was electric,” said Yochi Briskman, the concert’s producer and musical director.  “Yaakov taught the audience the chorus before he sang the song.  His backup choir for the song was the Israeli army choir.  It was incredibly moving and beautiful.”

While the overall theme of the night was thanking the chayalim for their efforts, unity between Jews from all over the spectrum was also a major part of the event.

“The night wasn’t about politics,” explained Shwekey.  “It was to show that no matter what side you are on politically, or where you are holding religiously, we want to say thank you.  People have a tendency to label others, but it doesn’t matter what color yarmulka you are wearing or how religious you are, we need to pay less attention to our differences on focus on the fact that we are all Am Yisrael.”