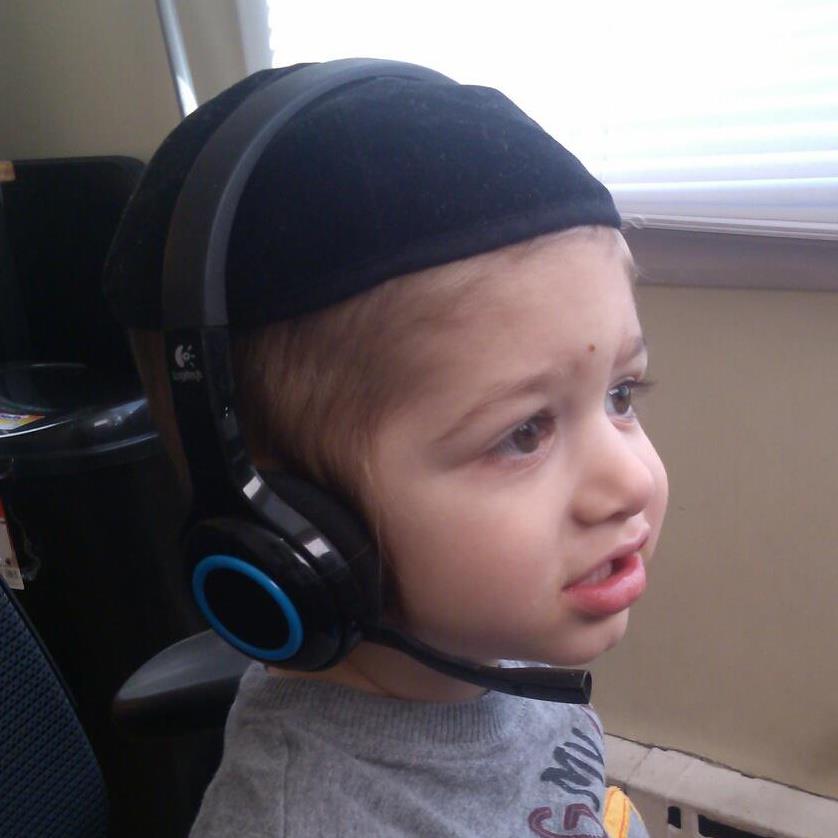 Attention all parents! Trying to cook or clean; learn or earn? I’ve found that YouTube of all things can really be a lifesaver in times of desperation. No, I do not promote sitting your child in front of a monitor watching videos all day, but every now and then, as I said, it can save the day.

My 2 year old son Akiva or “Kivi” (pictured above” is what you would call a music enthusiast. He has his own cd player with microphones and has a cd of his favorite songs ready to play whenever he feels like bustin’ a move.

How did he develop favorites you ask? Well, thanks to the generous folks at YouTube and the creators of the videos, he has watched plenty of New York Boys Choir, 8th Day, Maccabeats & Yeshiva Boys Choir, etc.

Kivi not only wants specific videos played, he needs his props as well. He has a microphone and a small black tie for when the maccabeats videos come on. Actually, he even makes “hand sharks” gestures like the singer does at 2:42 in this video (http://www.youtube.com/watch?v=qSJCSR4MuhU). He calls out the astronaut suit guy swimming across the screen at 2:48 in this video (http://www.youtube.com/watch?v=oHwyTxxQHmQ). He screams “FISH, FISH!”. I guess he sees him swimming and associates it with fish.

When he watches the New York Boys Choir or the Shira Chadasha Boys Choir videos, he MUST wear a headset like the boy in the video and bop his head up and down. I actually think it’s funny when he watches YBC because he has to wear his size 8 velvet yarmulke like Yossi Newman (pictured next to Kivi), the choir leader of the Yeshiva Boys Choir. Good times…

By the way, I’d like to sarcastically thank NYBC for making my kid randomly mumble “kids of courage” and “maaminim” (their two songs that are videos) while he is playing with anything. Also, when I ask how his day was and what did he do today, he usually responds with “kids of courage, maaminim, maccabeats”, regardless of whether or not he actually watched the videos that day.

For a while, he was scared of Lipa’s “mizrach” video. I don’t blame him, those glasses have been known to strike fear in the hearts of little children? He calls Dovid Gabay’s “Ana Avda” the “camel” song. If you watch the video you’ll know why.

Did I mention he loves to dance? He has his own version of the choreography to NYBC’s maaminim and YBC’s “Ah ah ah”. One of these days I’ll have to record him, hopefully before it’s too late.

Below is the link to the playlist which has all the videos I mention and then some. You can create your own playlist as well and choose some of the videos from mine if you don’t want them all