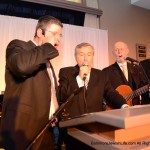 Baltimore, MD – Nov. 12 – After last year’s concert, I expressed my thrill of experiencing such an event. I am ecstatic to report that I just returned from Dveykus Reunion Concert 2! This concert did not disappoint.

Co-chairing the event were Chaim Wealcatch and Kenny Friedman. The Zemer Orchestra, led byNossi Gross, and Gary Honick of the Kol Chaim Orchestra, had the privilege of being directed by the very talented Nochi Krohn who, as Chaim Wealcatch said, “prepared for this concert in the dark”. He also mentioned that a portion of the proceeds from the concert would be put towards the already growing (hurricane) Sandy relief efforts.

This year, over 800 people filled Congregation Shomrei Emunah in Baltimore, MD. Rabbi David Finkelstein served as the M.C. for the evening. After being on the receiving end of his levity, he had the honor and the privilege of introducing the members of Dveykus; Elli Kranzler, Yussi Sonnenblick,Rivi Schwebel and, the one and only, Abie Rotenberg!

“It was hard to imagine topping last year’s concert. However, the addition of Abie Rotenberg and his creative medleys really made the evening unforgettable.” said Gary Guttenberg.

The evening was unforgettable indeed. The reunion began with a beautiful rendition of Lakol Z’man Va’eis. This was followed by an inspiring medley representing erev Shabbos, Shabbos itself and Motzai Shabbos including the songs of “It’s Time to Say Good Shabbos”, Ka Ribon Olam and Hinei Keil Yeshuasi.

The next medley, the emunah medley, joined Ani Maamin’s from both D’veykus and Journeys. The first half of the concert ended with Min Hameitzar and Naar Hayisi.

Following intermission, an announcement was made acknowledging the return of the 175 people who returned from their day of help in Sea Gate, NY.

…and if you thought the first half was good…

You had to be in attendance to truly appreciate the power of what happened next. We have heard it so many times before. However, this rendition of “Joe Dimaggio’s Card” took your breath away. Abie sang it solo and when he finished the final note, everyone was on their feet with a standing ovation.

Abie mentioned that he is often asked what his favorite song is. He said that he does not know how to answer that question. However, he knew what song was hardest to write… “Memories”. This song, about the Holocaust, brought tears to the audience’s eyes.

He continued and said, “though we have suffered tragedy, the Ribono Shel Olam has not forgotton us.” They then sang Habeit from Aish I.

This was followed by the first fast song of the evening, composed by Ellie Kranzler himself, Ki Lo Yitosh!  This song is an oldie but goodie. Yaakov Simanowitz’s thoughts, “Absolutely awesome hearing the songs I grew up with; truly amazing, a blast from the past!!!!”

When it was all said and done, the evening’s Co-chair’s were extremely pleased: Chaim Wealcatch had this to say, “The look on the faces of the 800+ people in the crowd, said it all. Everyone’s chin was up, facial expressions in anticipation and not a muscle moved, other than the soft swaying of some people’s shoulders. I don’t think people could believe that 19 songs were performed. It seemed like minutes, not over 2 hours! The ruchniyus and flavor of real bnai Torah came through!” Kenny Friedman was all smiles: “B’H it was a beautiful, uplifting and inspirational night. I receive tremendous chizuk from the music of D’veykus which will have me floating for weeks. Yasher koach to the incredible performers for gracing us with their talents and to all the people who worked so hard to put together this magical and unforgettable evening.”

We look forward to participating in the D’veykus Reunion Concert 3 in Yerushalayim Ir Hakodesh!