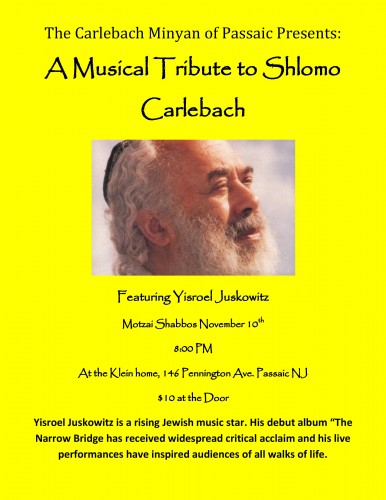 In memory of his Yartzheit last week on the 16th of Cheshvon (November 1st), Famed performer Yisroel Juskowitz along with Hillel Kapnick will be performing the compositions of legendary composer R’ Shlomo Carlebach. Yisroel is best known for his inspiring performances as well as his album entitled “The Narrow Bridge”. Yisroel has played and performed with countless names in Jewish Music such as Nochi Krohn, Eitan Katz, Baruch Levine, and Yoshi Fruchter. Hillel is best known for his singles “Min Hameitzar”, and “Hadran” which was featured at the Siyum Hashas. The concert will be taking place Motzai Shabbos November 10th at 146 Pennington Avenue Passaic, NJ.Admission is $10 at the door and the concert will start at 8pm.