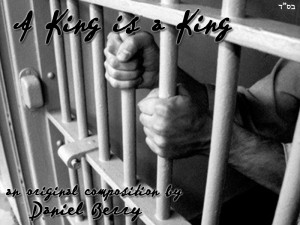 A King is a King

Up-and-coming pianist Daniel Berry shares insights about work on his album and a preview of a moving new original composition inspired by a Chassidic analogy, the Frierdiker Rebbe, and Reb Sholom Rubashkin.

Since launching his website a little over a month ago, pianist Daniel Berry has had a very busy few weeks. From publishing previews of his original compositions, to playing shows with his new band Tiferes, to performing solo at the recent Ordination Ceremony at the Rabbinical College of America before an audience of many distinguished guests, among them the former Chief Rabbi of Israel and current Chief Rabbi of Tel Aviv, Rabbi Israel Meir Lau, as well as the High Holidays… Daniel has barely had time to breath. But he’s still made time to bring us a first-glimpse at his upcoming album. “First, I want to thank everyone for your interest and positive response to my music. When I launched my site last month, I added a few of my recent original compositions, which I’m really looking forward to recording in a studio soon.” Daniel adds that the recordings on his site right now are from his iPhone voice memos. “Even so, right away I received great feedback, both from old friends who were happy to see me back at a piano after taking a three-year break in yeshiva, as well as from many new listeners.”
Taking all of those positive responses as encouragement and inspiration, Daniel has pushed forward to focus his time and energies on composing, with the hopes that his first album will be ready for the recording studio by the end of 2012.
So what’s unique about Daniel Berry’s music?
Since he began playing over 18 years ago, he’s developed a familiarity with a vastly diverse range of music. Beginning with a decade of formal classical piano training and culminating in a degree in Music from Princeton University, his experience allows him to draw on a variety of aesthetic concepts that have yet to be fully explored within the context of Jewish music. “Inspired by my studies in yeshiva and guided by my mentors, I’ve decided to work on an album which will be an account of my own unique journey to tie my past, present, and future together.”
Working with his knowledge of the compositional practices of the Lubavitcher Rebbeim and their Chassidim, Daniel takes a spiritual concept and lets it unfold organically within the language of the music he’s familiar with. The music is a true example of free choice, using improvisational styles to develop music in what he terms ‘free composition’.
“There’s a give and take; sometimes the music is purely receiving and expressing an idea, and sometimes the music takes a sort of autonomy, leading itself in a new direction that opens up a new depth and breadth in the idea itself. This concept, which is explored in the first discourse of the Rebbe Rashab’s ‘Ranat’, is found throughout my music and presents a unique dialog between the medium and the message that I hope will inspire people to find a new enthusiastic approach to their own Judaism.” The result is music that uses the sophistication and elegance of a variety of genres while still maintaining a distinctly Jewish feel.
Daniel’s newest piece (also recorded on his iPhone, for now) entitled “A King is a King,” is inspired by an analogy brought in Chassidus of a king in prison. Seen again and again in Chabad history with almost all of the Rebbeim, the analogy explains that a true king retains his dignity and self-respect even in the most degrading circumstances. The analogue is the soul, which always retains its purity despite the challenges of the physical world. While the general concept is well known, in this piece Daniel wanted to emphasize a particular aspect of the analogy: “It’s the struggle to both avoid being affected by the surrounding environment, while at the same time also having an effect on the environment itself.” Dedicated to Reb Sholom Mordechai ben Rivka haLevi, and influenced by the Previous Lubavitcher Rebbe’s account of his own imprisonment in White Russia, the piece goes through four distinct stages:
“(1) At first the king is overwhelmed by his new and horrifying surroundings; stripped of his glory, royal company, and physical comforts, he is led to depression or at the very least, shock. (2) Before long however, things take a turn when the king is allowed a brief moment amidst the drudgery of prison life to reminisce and relish his former standing. (3) Unfortunately, this fantasy is short-lived and he is once again confronted with his new reality, but now he begins to face it as a king, and not as a prisoner. This is not easy at first, because he can’t see his royalty being reflected in his surroundings, (4) but with perseverance he gradually overcomes this obstacle and it becomes obvious to all that the King is still a King.”
Daniel and his wife will be moving to Crown Heights in November in order to fully launch his musical career. Along with this upcoming album, look forward to interactive children’s concerts, composition and theory lessons for experienced musicians, and music workshops for the general public. Check his site www.danielberrypiano.com for details, updates, and more music.
Daniel can be contacted via his website or by email at booking@danielberrypiano.com.