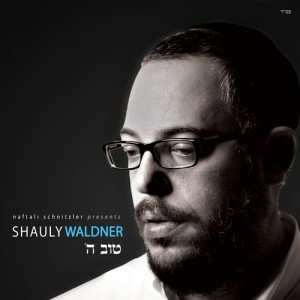 I know it’s been a while since I’ve written a review. I actually have a bunch that I’ve started and for various reasons not finished. I hope this will be the first of a bunch of reviews to come!

It has been a while since an album the quality of Tov Hashem, by Shauly Waldner, has come out. I have to admit that this is one album I was not eagerly awaiting. Nothing against the talented Shauly, but I have just about had my fill of the typical chassidish wedding singer who puts out an album. They all have nice pleasant voices, have nice songs and arrangements, but for some reason their songs just don’t make an impact and a few months down the road they are forgotten. I had heard about Shauly a few years back from a one man band friend of mine, and had watched him a little on YouTube. To me he was the prototypical chassidish (or heimish) wedding singer. I saw a preview interview of Shauly, and it also didn’t excite me. Of course everyone putting out an album is going to say that they have great songs, various styles, and that it’s going to be an amazing album. What else do you expect them to say! Then two things happened, the audio preview and also a video interview of Shauly by TheCoolJew.com both came out and my perspective on this imminent release changed. The songs really sounded good and special. Watching Shauly talk about how he got into the singing business (and my hat off to him for giving it a shot) made me realize that he’s not just another chassidish wedding singer. He’s really good and talented (nothing against all the others out there)! Shauly doesn’t have the most polished voice, however his voice is amazing and I can appreciate a true sounding voice (not all auto tuned and artificial sounding). What I really love however, are his songs, most notably songs composed by his brother, Yitzy Waldner and Pinky Weber. So without too much more I present to you my song by song assessment:

Avinu- This is a very upbeat song to start off the album. Composed by Pinky Weber and arranged by the album’s producer Naftali Schnitzler, this song is catchy to say the least. The choir of Moishe Krauss is featured very prominently on this song and on most of the album. I really like how the high part repeated over and over again. I learned back in my camp days that when you have a catchy high part, just sing it over and over and it’ll really catch on. Also the song also fades out at the end, which is the old 1980’s style, but in my opinion much better than an abrupt end to the song.

V’atem Tehiyu- This song, composed and arranged by Ruli Ezrachi, is one of my favorites on this album. It is an “oompah” styled song that begins a little on the slower side and speeds up as the song progresses. It is a very catchy tune and I find myself singing along every time I listen to it. The song really speeds up at the end when the high part is sung over and over again and fades out, as the first song did as well. It is a little repetitive, but to me it highlights how catchy the song is.

Elokai- There is something about the words of Elokai Neshama that seems to bring out the nicest hartzige and soulful songs. This version, composed by Pinky Weber, and arranged by Moshe Laufer, is no different.

Toiv Hashem- The title track of the album, this is a disco/techno style song, composed by Lipa Schmeltzer and arranged by Naftali Schnitzler. As those of you who regularly read my reviews (or as regularly as I write them) know, I am not into the techno style. This song happens to have a real melodious tune and is not completely a techno song, so I was able to listen to it and enjoy it as well.

Ki Malachov- Shauly is lucky to have a talented composer for a brother, Yitzy Waldner, and this is one of his finest songs by far. This amazing song is by far my favorite song and everyone I have spoken to just loves it and can’t stop listening to it. Yitzy sings part of the song, and it is arranged by Naftlai Schnitzler. I really like the duets and harmonies of the brothers together and cannot get enough of listening to this song.

Da- Here is another lebedick song that is just enjoyable to listen to. It is composed by Shauly’s brother Yitzy, and arranged by Moshe Laufer. It has Moshe’s signature horn lines!

What Will Be- This is a very meaningful and hartzige song. The song, composed by famous badchan Motti Illowitz and arranged by Naftali Schnitzler has an English version and Yiddish version (see my comments by the last song for details). The English version features background vocals by the talented Shloime Kaufman.

Mi Komocha- This song is a rock ballad which is just another beautiful song on this album. It is composed by Dovid Klein, who, from my memory, is a newcomer to the JM scene (I love when unknowns get a song on an album), and the song is arranged by Ruli Ezrachi. This song stands out to me for the arrangements, and I especially like the synthesizer solo at 2:47.

Amein- This song, another composition of Yitzy Waldner, is a disco styled hora, which the 2nd part of the song has a little more upbeat tempo. Arranged by Moshe Laufer, this song is another pleasant song to listen to and sing along with.

Muron- I think I know why I waited to write this review until the Aseres Yemai Teshuva, it’s because of this song. The words are from selichos that we say this time of year, and saying them with this song in mind really gives the words an added perspective. This is a hauntingly beautiful song, composed by Yitzy Waldner and arranged by Moshe Laufer.

Siman Tov- This is a fun and catchy song that was featured on the music video that preceded the release of this album. It is also composed by Yitzy Waldner and arranged by Naftali Schnitzler.

Vuz Vet Zein- This is the Yiddish version of What Will Be. The choir on this song is led by Yidel Kahan.

In conclusion, this is a very enjoyable song and I highly recommend it. It was not an album that I had very high hopes for and it has wildly exceeded my expectations. It is available everywhere good Jewish music is sold or you can buy it online http://www.mostlymusic.com/tov-hashem.html.