HILLELKAPS – Review of Selichos at the Carlebach Shul 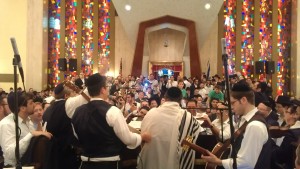 Like I seem to do in a number of my reviews/recaps I’m going to start with a Disclaimer:

I am aware that everyone has their own opinions on these events, I am also aware that getting many different types of Jews together (and not having any fights) is a good thing! Achdus is the key here.

To Begin:
I had the privilege of attending the Selichos held by the Carlebach Shul inside the West Side Institutional Synagogue. I was actually one of the people who used to attend when the Selichos were still held at the Carlebach shul itself, however since then it has become so popular that a bigger venue was needed.The night/morning started at about 1:30AM with a “schmooze” given by the Rav of the Carlebach Shul, Rabbi Naftali Citron and was then followed by Selichos. The Selichos as usual were led by Yehuda Green. For those who may be unfamiliar with who Yehuda Green is, (Although I can’t understand how that could be if you’re on this website) Yehuda is what you might call “The next Carlebach”. A Talmid of R’ Shlomo himself Yehuda has been taking the Jewish Music World by storm in a very Carlebach-ian way. This Selichos is held in a very serious and yet musically-infused mood. Some may feel that davening with musical accompaniment can be considered frivolous, but keep in mind that this was how a nice portion of davening was held in the Beis Hamikdash. There was a very strong vibe of achdus in the room since there were Jews of all types davening and singing together and it would not be strange at all to see a Chassid with his arm around a man wearing tie-dyed clothing with long hair and no yarmulke. Everyone went in with the same goal in mind, to Daven and connect with Hashem in the best way they knew how to. Musical Accompaniment was provided by Aaron Zutler (Yehuda’s Producer/Manager) and Avidon Moskowitz (I believe the one who first “discovered” Yehuda) on guitar, with violin by Yonasan Rothman. The sound system for the event was maintained by Hudi Greenberger (of Guitar Man Band/ Shir Chodosh Orchestras fame) who also joined in on guitar. 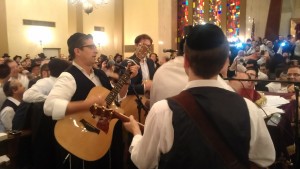 -For those who DO enjoy this style of Davening I also highly recommend coming to the Carlebach shul on Hoshanna Rabba morning for Davening. Last year when I went (For the first time) Rabbi Citron led Shacharis and Mo Kiss led Hallel. Hallel went for about 4 hours with all the different niggunim and that time just flew by.