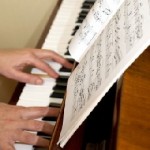 JMR: When did you start composing, and what were your early influences?

YM: I don’t remember exactly, but it was around 5th grade. Most of my attempts at songs were similar to Shmuel Kunda or Marvelous Midos Machine songs, because that was the main music I listened to up until that age. I take that back, they were pretty much direct copies!

Do you find that at the beginning there is a tendency to be very unoriginal?

Yes, I think that whenever someone composes a song, especially at the beginning, they’ll use bits and pieces from other songs. The difference between beginner and advanced composers are twofold. First of all, advanced composers take only very subtle ideas from other songs so it’s not an actual copy. Also, they have a collection of their own unused songs which they recycle bits and pieces of.  Since it is their own song or song fragment that was never made public, they are technically being entirely original.

Is there really no such a thing as coming up with an entirely original song?

No of course there is, but I don’t think people like those songs as much because they want at least some element of comfort and familiarity.

Do you have a specific composer that you model your songs after?

I don’t think there is a single composer out there who I haven’t used some technique from them in one of my own songs. Whether it’s  how to choose a lyric or deciding how much  range a song should have,  or something else, I am constantly learning from other songs. Especially hit songs.  I often ask myself “why is this song a hit”.

Can you give an example of a hit song and why you think it’s a hit?

Ok, let’s break down the song “Ben Bag Bag”. Firstly, the lyrics are catchy, well known, and hadn’t yet been used in a song. The verse is very catchy, the word “bag” is sung 24 times! The chorus starts with the “call and response” pattern of being able to pass the mike to the audience for “bah bah bah”. The hook of “uminah lo sazuah” is appropriately placed halfway through the chorus, and hooks the listener -changing the feel of the song, with two major chords lasting a full bar. Also, the ending is one of the first- if not the first ending that scales up to a higher octave. This is now a signature Yaakov Shwekey/Baruch Levine style ending, and is very popular. There are obviously other factors. For example, the fact that Yaakov Shwekey sings the song helps a lot, but for now I’m talking about the song itself.

You make it sound like composing is a science, involving strictly technique. Is there any inspiration involved as well?

Yes. I would say that inspiration is usually what gets a song started in the first place, and once you start writing the song, you use some technique, often subconsciously.

What would you say are your strengths and weaknesses?

My biggest strength is that I have a good understanding of harmony/chords. I do arrangements for AKA Pella and other choirs that emphasize harmony. This helps me with composing because I often have a chord structure in mind before I write a song. I also use chords that are not typical, like slash chords for example.  My weakness is that I have a hard time composing on the fly. I seem to only have success when I have a wave of inspiration, which is not as often as I’d like.

Has anyone in particular helped you with composing?

Yes- Elimelech Blumstein. He often listens to my songs and offers pointers on how to fix them. I once played a song to him and he wasn’t paying close attention, so he sang the song back to me, changing it significantly-thinking that that was what I sang to him.  I never told this to Elimelech, he’ll probably find this out when he reads this! That song will IY’H be on an upcoming Newmark Productions album.

Isn’t that a little bit unethical, taking his idea for part of your song?

Actually no, I myself unknowingly helped him with one of his songs, “Birchos Avicha” on Dovid Gabays album.  We have that kind of relationship.

Tell us a little about “Lo Yaavod” and what went into composing that song.

I was learning Pirkei Avos on a Shabbos afternoon and this Mishna really hit home. The idea of living life to the fullest by doing everything out of love really resonated with me. I ran out of words because the Mishnah kind of stops after “al menas lekable pras”. I thought that it’s a shame because it could’ve made a good song. Then I saw the Ravs’ commentary, the words “Lo yaavod adam” etc., so I was able to continue.  B”H I was able to write a song that is full of energy, which is appropriate for the message of the song. Worth noting that the song came to me on Shabbos, and it’s easier to compose on Shabbos than during the week. Maybe because you can’t use an instrument, so you can be more original. When you compose with an instrument, there’s a tendency to copy ideas from other songs.

Do you have any other songs in the works?

Yes B”H. I just put several new songs on my website, yossimuller.com, for anyone who is looking.

I’m deeply grateful to the JewishMusicReport, and everyone else in the Jewish music industry that makes what I do possible. I’m also very appreciative of all the Jewish music listeners. So far, I’ve been having success with songs that are more conventional. I also have a collection of songs that are more unique that were not featured on any albums. I know that some of you prefer that type of music and I hope to share those songs with you one day.