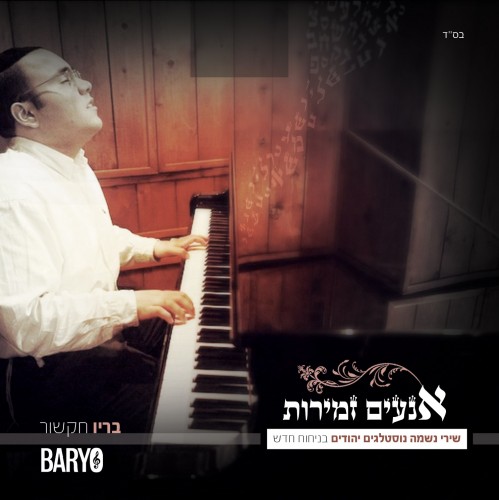 With the Yomim Nora’im swiftly approaching, Baryo Chakshur sweetens songs as his project’s title shows. Between his first album and the upcoming “Baryo 2,” the singer/composer surprises before the Yomim Nora’im with a special project titled An’im Zemirot which includes 18 songs, most of them old ones with a vintage taste. These songs never succeeded in breaking out like the songs in album, songs composed by the likes of great composers Moshe Laufer, Yossi Green, Yerachmiel Begun and others. Three of the songs were composed by Baryo.

A few days ago, Baryo returned to the walls of the Beis Midrash of Torah Vodaas in New York, where he learned previously. During this time, Baryo plans on spending most of his time learning, saving his talents for Bein Hasdarim.

Just before his return to New York, Baryo finished this project which he has worked on for the past three years. Before you lies the song Melech Yoishev, a song composed by Baryo a few years ago on a late night on the edge of the sea in Netanya, his birthplace, while singing during selichot at the Beit Knesset Hagadol by R’ Moshe Chaim Lau.

The songs in this album are accompanied by the piano and background voices and harmony done by Baryo, with a little help from his brother “Maryo” (Meir) on a few songs.

In the next few days, the album will be mixed and edited for its finishing touches, which when finished, will be available in Jewish music stores worldwide. Baryo will also be serving as chazzan yet again, in New York for Rosh Hashanah and Yom Kippur, this time in Staten Island for Rabbi Aharon Zev’s Shul, Ohr Torah.