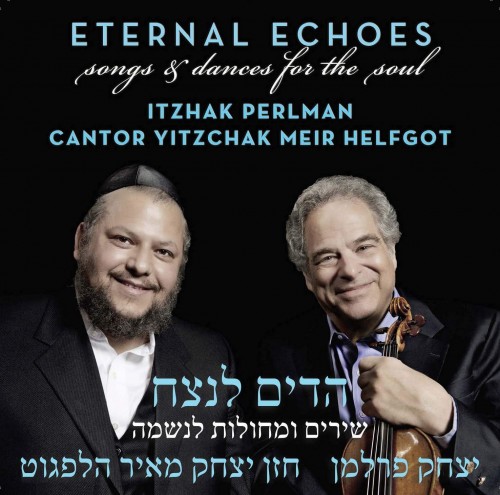 Itzhak Perlman’s soulful tone and virtuosic technique along with Cantor Helfgot’s spellbinding tenor meld perfectly together on a new album of beloved liturgical and traditional works. While rooted in the cantorial-liturgical tradition of Jewish music, the ten tracks on Eternal Echoes encompass a wide range of musical moods. Perlman said that his idea “was to do Jewish comfort music   everything that I recognize from my childhood is in this program.” The two masters began to explore the confluences of sound between Perlman’s famed classical technique with Helfgot’s magnificent golden voice. “I always find that there is a real communication between voice and violin,” says Perlman. “This was the fulfillment of a dream,” says Helfgot. “When I was a child growing up I always knew about Itzhak Perlman, so of course I said yes, right away!

I am very happy that this dream became real.” Released to coincide with the High Holy Days, these exquisitely crafted musical pictures include a stately and dramatic arrangement of “Sheyibone Bays Hamikdosh,” the operatic “Shoyfer Shel Moshiach,” written by Abraham Goldfaden, father of the Yiddish theater, “Dem Trisker Rebn’s Nign,” a song Perlman learned from his klezmer collaborators and “Mizmor L’Dovid,” an arrangement of Pslam 23 which may be the most famous piece on the album. Eternal Echoes wraps up with “Kol Nidrei,” the famous prayer for Yom Kippur, in a simple chamber-music setting that contrasts tastefully with past grandiose arrangements familiar to fans of singers like Richard Tucker and Jan Peerce.

About Itzhak Perlman  Israeli-American violinist Itzhak Perlman is widely considered one of the most accomplished violin virtuosi in the world. Since making his Carnegie Hall debut in 1963, he has performed throughout the world with every major orchestra, recorded dozens of albums, and received many awards, including a Grammy Lifetime Achievement Award  for excellence in the recording arts in 2008.

About Cantor Yitzchak Meir Helfgot: Born in Tel Aviv, Cantor Helfgot has become a leader in today’s revival of Jewish liturgical music since his concert debut at the age of 23. He is both a recording artist and a highly sought-after singer at concerts and Shabbatot. He has performed across six continents drawing record crowds, in addition to serving as Chief Cantor of the Park East Synagogue in New York City.