Music Review of Eig8th Day “All You Got” 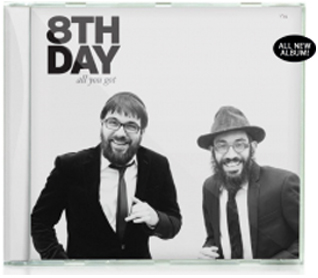 It’s not that often a liberal, Reform, Jewish woman gets asked to review a new single by a Lubavitcher pop/rock band.  But Eig8th Day breaks all stereotypes.  They are legitimate musicians who write their own music, not just performers doing clever parodies of popular songs.  They partner with Grammy nominated and Emmy award-winning musicians.   Their YouTube video, “Ya’alili” from their last album, “Chasing Prophesy,” has over 1.4 million hits from around the world.  Plus, a number of fans have posted their own “Ya’alili” videos.  So I figured the song was worth a listen.

Eig8th Day’s YouTube video, “Ya’alili” from their last album, “Chasing Prophesy,” has over 1.4 million hits from around the world.  Plus, a number of fans have posted their own “Ya’alili” videos.

Eig8th Day’s single, “All You Got” from the album of the same name, has an Earth, Wind and Fire sound with strong brass, rocking guitar and bass riffs, a fun dance beat and a great inspirational message.  Like their previous albums, “All You Got” has an interesting, eclectic mix of song styles ranging from fun dance tunes like “Mazel Tov”, to lyrical like “Rabbi’s Son” to the Reggae beat of “Bounce.”

Based in the Los Angeles, South Bay and Orange County, California area, Eig8th Day is fronted by Chabad Lubavitch Rabbi, Shmuel Marcus and his brother Bentzie Marcus. They’re story is a real modern day “Jazz Singer,” except they haven’t had to give up their spiritual work to make popular music.

I give the album 4.5 Stars out of 5 for secular audiences only because some won’t understand the Yiddish lyrics although they’ll still love the music.  But I give “All You Got” 5 out of 5 Stars for its musicality and a great message for families of any denomination.

“All You Got” is available on iTunes, Mostly Music, www.my8thday.com