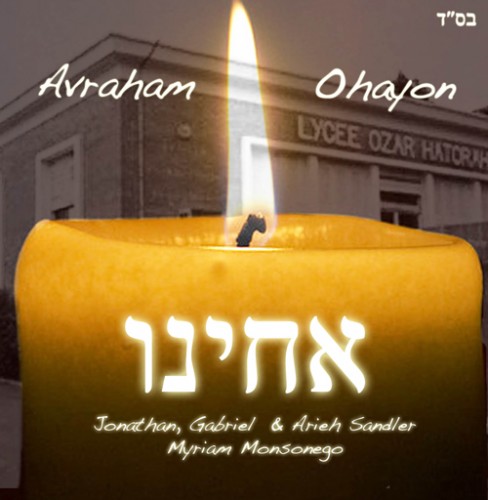 Only a few hours after a concert was held in Strasbourg, France, to benefit charitable associations– including the singer Avraham Ohayon – a tragedy occurred. Early morning on Monday, March 19th 2012, one Rabbi and three Jewish children were murdered in front of a Jewish school in Toulouse, for the only reason that they were Jewish, the world in shock. At this time of distress, many offered support to the families of the victims.

Avraham Ohayon also decided to offer his support. Right after the tragedy of Toulouse, Ohayon started a project to compose, and sing a song in memory of the victims of this tragedy. Many people accepted to participate in this project and immediately started working on it. The participants, over that 25 persons, included musicians, choir , technicians, computer graphic designers, and videographers. After weeks of recording, a new song named “Aheinu” was born, to never forget.

Avraham Ohayon and all the participants to this project were very moved by this horrible act of violence and therefore decided to honor the memory of the people who lost their lives.
By buying this song on the different websites that it will be available on, everyone will show his/or her support to the families of the victims, as all sales will be transferred to them.
David Sabbah