SPLASHNEWS-Review of 8th Day-All You Got 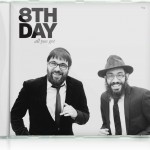 SPLASHNEWS- 8th Day is back! The superstar band has given us all they got with this brand new album, “All You Got”. I will first address the question I am getting about ten times a day. Is there another song like Yalili?! I believe I predicted this question many months ago in an article titled “The Up & Coming”. To all you people, let me ask you, does Baruch Levine have two “Vzakeini’s”? Does LIPA have two “Gelt’s”?! No! There is only ONE Yalili! Are there songs on this album that are potential mega-hits in their own right? Yes. This album features so many songs that I can rate 5 star that I won’t even rate them at all. We will have to wait and see if a song from the new album will take off like Yalili or not. Answer this one, if Yalili was not made into a music video and the first time we heard it was on the album with all of the other songs, would it have become such a hit? I will venture to say that not only would it have not become such a hit, but to this day there would be thousands of people that have not even heard of 8th Day! How many people have never heard the first couple of albums? How many people stilldon’t know that they exist?! Point made.

For those people, like a good friend of mine, who just don’t “get” 8th Day, you won’t “get” them in this album either. Your loss. There is nothing like them out there so you can’t really compare with Fried, LIPA, and Shwekey. Shmuel and Bentzi Marcus, better known as 8th Day, have their own unique style of music, their own musicians, arrangers, and they live on the west coast. Okay, that really has nothing to do with anything but come on, 8th Day from New York? That would be lame. 8th Day from L.A., now that’s the way to roll! If there is one let down in this album, it has to be that  all of the lyrics (or almost all) make sense. I loved on the previous three albums, that they just threw in lyrics that made no sense whatsoever and got away with it! That’s what was so great about 8th Day. Oh well.

I can go on all night but I know you want to get to the songs already. Like I said before that I will not rate the songs like I normally do, but instead I’ll do something different. I will pick one line from each song that I think stands out, either because I think it’s funny or brings out the message nicely or I just feel like it.

1-Mazel Tov (T.T.D.F.)- You want to know what’s with the title of this song? I think they though calling the track “To The Dance Floor” was a little intense so they put that on the side and called it Mazel Tov which goes better in Lakewood. This song is rocking from beginning to end. Would love to see this as a music video. Best line- “tell those you know, or even some strangers (to dance the horah)”.

2-Bounce– This reggae style song may be my favorite song on the album. I mean, who in their right mind calls a song “Bounce”?! I love the way Shmuel Marcus pops the “b” in bounce, only he would sing like that. This song would make a  great remix, maybe a little bit faster. Best line-“you got a downbeat Cadillac, pick-up truck, dog in the back”.

3-Harmony– This song not surprisingly features great harmony throughout. Stunning song. My highlight is at 2:17 where the beat comes in and the drums blend with violins. I also enjoy the variation in the high at 3:34. Best line- “enemy’s will walk away singing softly as they say, life is so much better with harmony together…”

4-Didan (Victory Song)-Very pumping rock song that a lot of people tell me is their favorite on the album. No, it’s not my favorite but I do think it’s a great song. The high part is very catchy which is probably why it resonates strongly with many. Best line-“people singing a familiar tune, it’s the one your listening to”.

5-May You Be Blessed-Very nice slow song. I love the high part that reminds me of Ken Burgess’ style. I like the harmony on the high that starts at 2:50, not too much, just perfect. Interesting that the theme of this song is the opposite from Avraham Fried’s song called “Lamah”. This one is about not questioning Hashem while Fried’s is about asking. Best line-“May you be blessed for the tears you never cried”.

6-All You Got-This the title track and a great one at that. Heavy brass intro that’s just the perfect length. The song starts off with “After 125 years…”, I would like an explanation for this one as every kid knows that we live for 120 years! This song was done with perfection and what strikes me most is the incredible mixing which is something most people don’t realize  is one of the most important parts of a song. Best line-“you can put my album on a shelf to rot”.

7-Money Room- For those who miss the Destiny albums, this one’s for you. Not that Destiny had anything to do with the song but it is distinctly their style. A slower song with a nice message. Best line-“the money room’s the world we live in, only you know who you are”.

8-The Rabbi’s Son-This song starts off really slow with an acoustic guitar intro but slowly picks up. You have to give this one a chance  as it has four parts with each one better than the last. When I first heard it I skipped to the next track after just thirty seconds. Now, this is one of my favorite songs on the album! I love the climax at 4:12. Best line-How can I know where I’m going if Idon’t know where I’m comin’ from, how can I know why I’m livin’ if I don’t know why I was dyin’ for”.

9-Cheery Bim- Awesome song heavily featuring electric guitars. You won’t walk away from this one! Best line-“one’s just one, but together we’re number one”.

10-By My Side-This one’s got an all a capella intro that really catches your ear. Very pleasant listen. Love the high at 3:26 with it’s high harmony that we don’t hear anywhere else in the song. Best line-“rivers have come to surround me to turn my boat around”.

11-Manhattan 2.0– For those of you that have heard Manhattan 1.0 this one is real thrill. For those that didn’t, don’t worry, this thumping rock song is sure to get on your feet. The song starts off with the high part and then the low comes in at .42 with a bang. This song also features one of the best musical interludes that I have ever heard starting at 1:49 with a trumpet solo and climaxing at 2:05 when the the trumpet and drums collide with the electric guitar which takes over the solo and finally ending with a sax. I think I listened to that over fifteen times already. Best line-“taaseh li tovah, you’re blocking my driveway”.

Bottom line, this album which I rate 5 out of 5stars is one of the best albums I have heard in a while. If you haven’t bought it yet, it’s time to crawl out of your cave and brighten up your life. www.mostlymusic.com