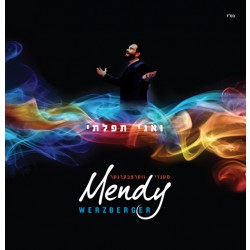 SPLASHNEWS- I know this an overused cliche that usually means nothing nowadays but I will use it myself for the first time! “This album is a breath of fresh air.” You know how some times you have to listen to an album a couple times before you can appreciate it? This is NOT one of those times! You will get hit with the sense that this is something different and special, the very first time you hear it. In an interesting story, his mother had been urging him from a young age to put out an album but he was never interested. After his mother was nifteres this past summer he decided it was time to fulfill her dream and released this debut album in her memory. When I heard that he was producing it himself, I was skeptical because I am almost never impressed by self produced albums. Singing is one thing, producing is another. I must say I am pleasantly surprised by the fantastic and cutting-edge quality of the album. One reason why I hope he is successful is because we have so many singers these days with many of them sounding more or less the same and finally we have someone that is not looking to copy anyone and really has what it takes to hold his own.

He is not completely new to the music scene as his songs have been featured on albums by Piamenta, Yosef Chaim Shwekey and Mendy Wald, among others, and he has also appeared on several albums and projects over the years including Unity for Justice, Copyright and Mendy Wald’s Echad Yachid U’Meyuchad.

This album which he produced together with Yitzy Schwartz features eleven songs of which he wrote ten of them; some solo and others together with some of the big names including Yitzy Waldner. Here is a look at the songs.

1-V’ani Tefilosi– The title track; this song was composed by Moshe Werzberger, Mendy Werzberger, and Yitzy Schwartz. The song starts off with a light techno sound that can give you the impression that you are standing in an aquarium. It develops into a medium paced, very enjoyable song. The bass that kicks in at .08 seconds is featured throughout and together with some great electric guitars on the high part, this for me is what makes this song the great one that it is. Great arrangements by Ruli Ezrachi and Yitzy Schwartz. Very good opener. 4 1/2 out of 5 stars

2-V’no– This song is where Mendy starts to move away from the typical and gives us a slow reggae style song. Very relaxing listen. The beat takes a turn at 3:10 which keeps it from getting boring. Composed by Mendy & Yitzy Schwartz, this is an average song. 2 1/2 out of 5 stars

3-B’sheim Hashem– This song features interesting arrangements by Eli Lishinsky and Nir Graff. At 3:26 Mendy shows some nice vocals as a Yanky Katina guitar solo comes in. I love the high part; not so much the low. Composed with Yanky Katina. Yeah, you read right, I guess he doesn’t just play the guitar! 3 1/2 out of 5 stars

4-Toda L’cha– By far my favorite song on the album, this song is something you have never heard before. The beat sounds sefardi but it really is not a sefardi song. At 1:32 Eli Lishinsky comes in with vocals in a bridge that defines this song then he comes in again at 2:11 for the low. His voices creates a great contrast with Mendy’s and goes perfectly with the style. Make sure to check out the music video for this song. Arranged by Yitzy Schwartz, and Eli Lishinsky with lyrics by Mendy & Ruli Ezrachi. 5 out of 5 stars

5-Kol Zman– Another style that you most likely have not heard before. This one was composed together with Yitzy Waldner who is also featured throughout the song. If I had to pick a favorite song other than Toda, it would be this one. Great bridge at 3:23 first as a sax solo until Yitzy comes in at 3:42 and fianally Mendy at 4:01 with Yitzy doing harmonies. Just great stuff all around. Arranged by Eli Lishinsky and Nir Graff. 5 out of 5 stars

6-Eishes Chayil-Nice ballad starts with piano, guitar, and flute with violins joining at :59. Interesting beat break down at 3:18.  Composed with Yitzy Schwartz who also arranged it. Very nice choir arranged by Eli Laufer. 3 out of 5 stars

7-Borei Olam– Very pumping techno dance song. I love the arrangements by Shai Bachar. One reason I like this song is because Mendy was able to do this as a techno while still keeping it Jewish which unfortunately is rare these days. Backup vocals by Shloime Kaufman. 4 1/2 out of 5 stars

8-Tzitzis– Beautiful song with words you don’t hear often. I believe the last album that used these lyrics is one of the older Camp Shalva albums. Is it just me or does Mendy sound a little like Yeedle in this song? You probably won’t hear this song off the album but that’s okay with me. As Yossi Green said in a SPLASHNEWS interview, some songs are not meant to be sung, but to be listened to; by a singer who sings it beautifully. 4 out 5 stars

9-Mendy’s Instrumental– Five stars for originality! I love the concept of a no lyrics song but I must say that it takes guts to do that. Although it doesn’t sound like in general Mendy cares what anyone else does. I love the music especially at 1:40 that give me the feel that I’m in Mexico or Old Town San Diego. I think I will do something different also and not rate this song.

10-Broken Hearts– This english song is a tribute to Mendy’s mother and is a gorgeous song composed by Mendy and Yitzy who also arranged it. This song is sung with a lot of emotion. Backround vocals by Yitzy Spinner. As I have been writing english songs for some time now including many songs for two camps, I can connect with this song and I love the concept. At 7:18 the song almost ends but does a quick turn-around and goes on for another minute and a half with only music. 4 1/2 out of 5 stars

To sum it up, if you haven’t yet bought the album, get out there and get it or go to www.topjewishmusic.com to purchase. Some albums can be passed up; this is not one of them.