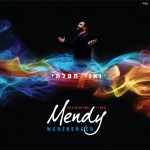 By: Baruch Naftel
Mendy Werzberger. This is the proof that you don’t have to be Shwekey or MBD to put out a killer album. Don’t get me wrong, Shwekey and MBD are awesome but once we have them we don’t need 5 other artists trying to sound like them. Mendy Werzberger definitely fits that criteria. Bringing a whole fresh new sound to Jewish music with his debut album “V’ani Tefilosi”. His voice is a breath of fresh air. If I had to compare him to another singer, I would say he’s a mix of Yeedle, and Mendy Wald who are very, very unique in their own way. But hey, as I said we’re not comparing here. He adds his own uniqueness to the table as well. With a very Hartzige voice, powerful at times , and softer at others, he actually blends very well with the music and sings with his neshama, like he means it, which is something you find very rarely among artists today. They should have changed the advertisement from “music you can feel” to “a voice you can feel”! I just love it! (Btw, I see him at Satmar in Monsey many times when I go to daven Shacharis there. He’s a great guy. Always bubbly and full of simcha! And usually humming a tune to himself. How appropriate for a singer.) He actually produced the album himself together with Yitzy Schwartz (The 2nd Dance, Yosef Chaim Shwekey, Srully Williger, etc.), and composed most of the album , which shows the extent of his musical talents and abilities. We’ve seen Mendy’s songs on a few other albums but he’s brought everything to a whole new level here. I have one question. Mendy, why is this your first album??? Anyways, lets get to the album itself before I get carried away.

Track 1: V’ani Tefilosi – Composed by Moshe Werzberger, Mendy Werzberger, and Yitzy Schwartz. Arranged by Ruli Ezrachi and Yitzy Schwartz. Choir by Yoel Dikman. The album starts off with a bang. Always good to start off with a mainstream song so as not to confuse the audience. Wait till later in the album to break out the other styles. Great classic Disco song. One thing I like a lot about this album is that besides the exquisite arrangements, you can hear everything that’s going on in the song individually, and the sound is awesome. Kudos to Eli Lishinsky who mixed the album and Alan Silverman who mastered it. Yes mastering an album is as crucial as mixing it. For those of you that don’t understand this, you can call up Aryeh Kunstler for a personal tutorial on that subject. Moving on……

Track 2: V’no – We start getting a little funky. The track starts off as a reggae groove and then switches to a regular oom- pah style towards the end. Kudos to Yoel Polatsek and the Zmiros choir for an awesome job on the choir. There’s one reason Mendy used them on this song…. Cause no one else can pull that off! Even if they tried hard. Really hard. Love it! Composed by Mendy & Yitzy.

Track 3: B’sheim Hashem –  The album takes a turn here as Eli Lishinsky gets involved in the arrangements. I’m not sure how Eli hasn’t put all the other arrangers, technicians,producers, and sound engineers in the industry out of business. Nir Graff helped out with the arrangements too.. It’s a Ballad/ R&B style track. Great original idea for an album. Composed by Mendy & Yanky Katina. I didn’t know that Yanky composed songs but hey, always learning new things. (Great guitar player btw,) Check out his solos on Lipa’s Mizrach song. Oh, and on Lipa’s Mizmor L’soda song too. Just Sayin’.

Track 4: Toda L’cha –  Undoubtedly the hit of the album. My third favorite song on the album. I don’t rate songs with stars btw. Its like asking someone to rate their kids with stars. A song is too complex to describe with a star. Sorry. Awesome S’fardi style song. Featuring Eli Lishinsky. Good idea Mendy. When you do something on an album that no one has done before you’re headed in the right direction. Composed by Mendy, with lyrics by Mendy & Ruli Ezrachi. Arranged by Yitzy Schwartz, and Eli Lishinsky. Post production and choir by Eli Lishinsky. Make sure to check out the music video of this track online. Can’t stop listening to this track.

Track 5: Kol Z’man –  My second favorite song on the album. Not sure how to classify the genre of this song but its awesome. Composed by Yitzy Waldner & Mendy. Featuring Yitzy Waldner. (Awesome voice btw!) Yitzy: Please come out with your own album very quickly. The world will be a better place when you do. And so will my life! (To tell you the truth, my life has taken a turn for the better since Mendy’s album came out). (Dont judge me!). Arranged by Eli Lishinsky and Nir Graff. This song is really good. ( Had to say that one more time. Lol!)

Track 6: Eishes Chayil –  An average ballad. Composed by Mendy & Yitzy. Arranged by Yitzy. Choir by Eli Laufer. Hi Eli. Haven’t heard from you in a while. Maybe you and your father could move to the USA so that all the artists who can’t afford to go to Israel can still have you guys work on their albums. You guys are legends!

Track 7: Borei Olam –  My absolute favorite song on the album. Its a Techno Dance song that gets you moving, with an awesome melody to it, and Mendy puts all of his neshama into this one so it doesn’t sound like many other techno songs in JM that sound like they’re cut and pasted from 100.3 (z100). Composed by Mendy. Arranged by Shai Bachar. Choir and background vocals by Shloime Kaufman. Great job Shloime! (Great singer btw. Check him out on AKA Pella 5. With Simcha Leiner. May as well pack it all in. No?) As much as I can’t stop listening to Track 4, I can’t stop listening to this song triple the amount!

Track 8: Tzitzis –  Really nice oom- pah song composed by Mendy and Yitzy. Arranged by Yitzy. Choir by Yoel Dikman. Cool name for a song! Lipa’s not the only guy who makes up cool track names. See?

Track 9: Mendy’s Instrumental/ Niggun –  Its exactly what it sounds like. A song composed by Mendy and arranged by Yitzy to a funky beat and music only. No vocals. Thanks Mendy. Nobody’s done this in like 400 years. I haven’t heard an original instrumental on a solo album in ages. Only instrumentals of another track on the album which had been done vocally already. Good thinking Mendy! This is one of the things that makes you unique and especially talented. Now, the credits say the choir was done by Yoel Dikman, but correct me if I’m wrong but I don’t hear any choir on this track. It may just be a printing mistake. Otherwise K+Z Creative did an awesome job on the cover design. They’re the best in the business! Anyone making an album should use them.

Track 10: Broken Hearts – A masterpiece. A work of art. This is an English song which I’m assuming is a tribute to Mendys mother who the album is dedicated to. The lyrics are heartfelt and touching and Mendy’s Neshama soars in it. Composed by Mendy and Yitzy. Yitzy outdid himself on the arrangements here. Gorgeous! And finally, a surprise: Yitzy Spinner does background vocals. HOW COOL! (Btw Yitzy: I’m waiting for your next album. :-) (Authors Note: Just wanna let everyone know: If you have any questions about music call up the multi talented Yitzy Spinner. He knows anything and everything about music. He’ll definitely hook you up!) Also, when you think the song is over don’t stop the CD. Listen carefully. The song goes on for about another minute and a half. Again, what a great song!

In short, please go out and buy 2 copies of Mendy’s album. because when all the distributors and CD printing presses go out of business due to the impossible demand of Mendys album and you give your copy to your close friend cause you feel bad that he doesn’t own one, don’t come complaining to me that you need another copy of it. Lol! Thank you Mendy for giving us such a gem and we’re all looking forward to Volume 2. I hope its on the way already. Peace out everyone!